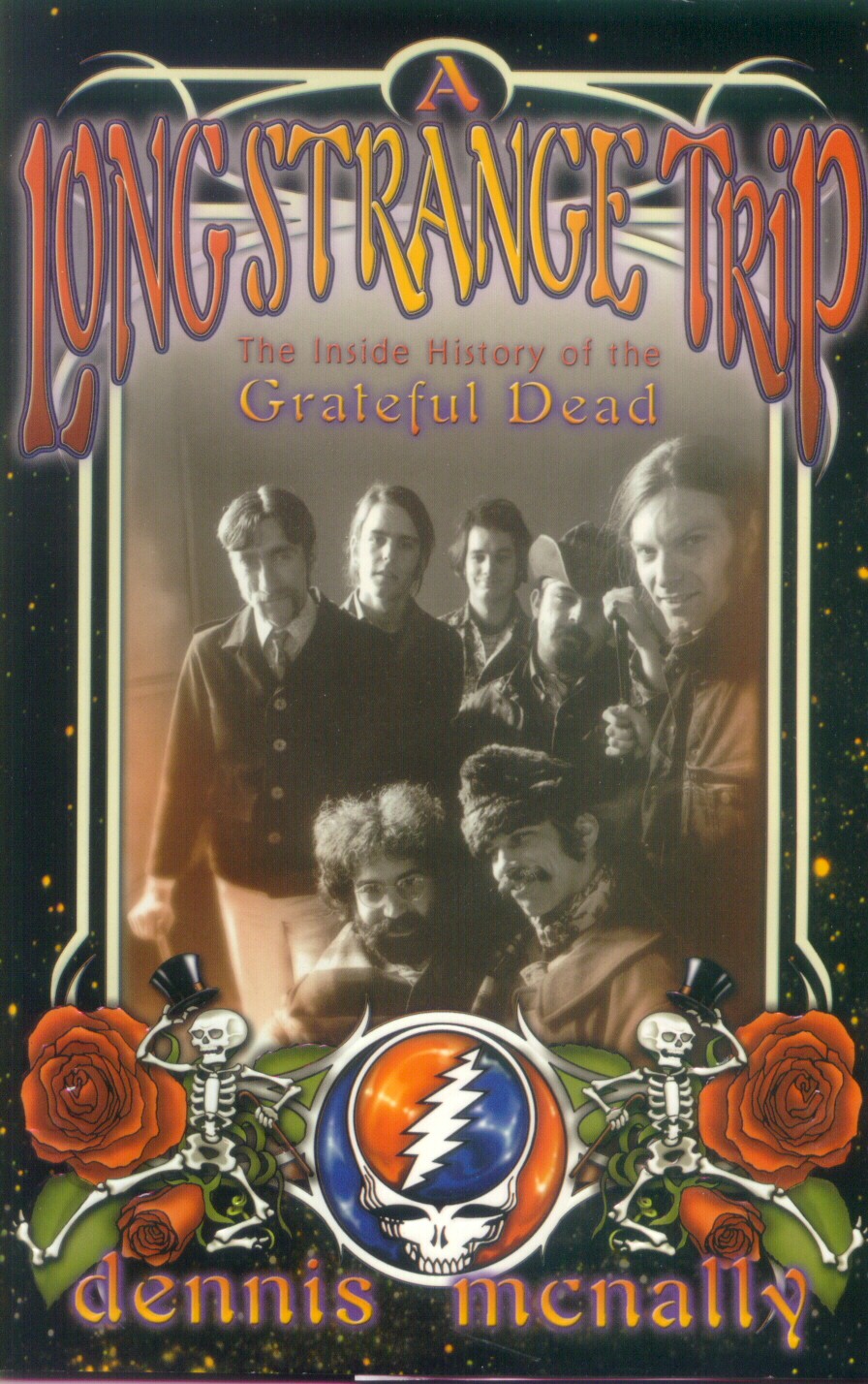 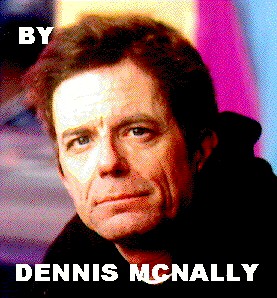 Shortlv before every Grateful Dead concert, there is a luminous, suspended moment.  The doors are still closed.  The band has not yet arrived. Bathed in the subliminal hum of the stage's electric potential, you smell the ozone of 133,000 burning watts and realize that the elegantly arranged castle of equipment around you is alive---şnot just stuff, but a sentient alchemical sculpture.  You are surrounded by an enormous electronic beast that can link the group consciousness of six musicians and an audience of thousands to transmute notes, thoughts, and volts, fusing boogie dancing, high-tech doodah, and the act of performance into a subtle, profoundly human ritual of celebration.  This stage is a giant alembic, the fabled alchemical chamber where the magical transformation took place.  It is a portal to the mysterious world beyond daily life.

This monster lives.  The equipment cases that define the rear stage are its skeleton, extruded daily as it is assembled for its labors.  It breathes through the pulsating speaker diaphragms, the interconnecting cables are its nerves, and it hears through a $30,000 harmonic analyzer originally designed by NASA to evaluate the aerodynamic strength of metals.  The ears and the brain, a forty-eight-channel sound mixing board, are positioned in a booth eighty-five feet away in the center of the hall.  From there, the stage seems a smooth, powerful monolith, its base draped in black, the undecorated equipment atop it set in a symmetric arc.  Backşstage, the seams are more evident.

From the top of the center-rear stage stairs, you stand behind and between the two glistening drum sets that anchor the setup.  At far left front-of-stage sit Brent Mydland's Hammond B-3 organ, a Yamaha synthesizer, and his own small mixing board.  Next to Mydland's corner, moving toward the center, is guitarist Jerry Garciaĺs equipment cabinet, essentially a frame that holds a sound effects rack, a preamplifier, a McIntosh 2300 amplifier, and four JBL speakers.  A floor strip with two foot pedals and seven switches, labeled "Mutron, Oct, Boss, Wah, Dist, Phase, Delay," sits in front of Garcia's vocal microphone.  It is secured to the worn Afshar-style stage carpet with gaffer's tape, the unique product of a small New Hampshire company, which is the secret ingredient that binds together all live rock and roll.  Some seven hundred pounds of Sonar drums and Zildjian cymbals make up each of the two trap sets played by Mickey Hart on the left and Bill Kreutzmann on the right.  An exotic array of other percussion instruments is set up behind them.  The front row, the "amp line," continues to the right with rhythm guitarist Bob Weir's Godzilla 1000 amplifier and a cabinet holding eight Gauss ten-inch speakers.  Phil Lesh's Godzilla and a sound processor bass monitor, essentially a small computer, define the right side.  A mixing board for the monitors, the floor speakers facing the musicians which allow them to hear themselves, fills the stage's right front corner.  Both sides of the stage are walled off by the boxes that carry the ninety steel-jacketed NASA surplus cables ("snakes") and twenty-seven Crest power amplifiers that energize the system.

An aisle behind the amp line gives access to each cluster of instruments and equipment, and the space behind the lane is defined by each crew member's tool case, surrounded by a fort of empty cases.  Production manager Robbie Taylor's case stands at the top of the stairs.  The left-hand drum set is backed by Ram Rod Shurtliff, crew chief since 1967, chatting with basketball star and NBC basketball analyst Bill Walton as he lays out some of Hart's "instruments"---an infant's windup toy, whistles, a kazoo.  The left rear corner of the stage is the redoubt of Steve Parish, stage manager and squire to the two guitarists, just now catching a hasty nap on the crew bus.  The other drum roadie, Billy Grillo, sits changing drumheads behind Kreutzmanĺs setup.  The far right rear is the territory of Bill "Kidd" Candelario, who cares for the keyboards and bass.

Above, 144 state-of-the-art Meyer Sound Lab (MSL) loudspeakers hang five-deep from the ceiling.  Still higher is a giant pentagonal truss holding two hundred lights.  Though they absorb far more power than all of the stage gear and sound equipment, the Dead's lights are still only a fraction of the normal design for a rock band; Van Halen, for instance, carries fifteen hundred lights.  Scrib (as in scribbler), the band's publicist and biographer, half listens as Taylor gleefully harasses the local union steward and reflects on his, Scrib's, conversation with Taylor during the previous night's drive.  Taylor had interpreted his muttered "House lights"---the last command before a show begins---as a demand to resume an interview.  Taylor replied, ôHowd you know that 'House lights' means the beginning?"

"I just want to see what I'm rolling," said Scrib, "but getting back to what we were talking about, I

'You can call me boss,
just don't ask me
to make any decisions'

was chewing on what you said about the crew last time.  They come on so cynical, but if anything weird ever threatened Garcia, they'd probably attempt something silly and heroic, y'know, just because they'd have to."

"Yeah," Taylor had agreed.  "And you know how embarrassed he'd be?"

Which is why this concert is more than entertainment, why the star syndrome doesnĺt exactly apply here, why the Grateful Dead isnĺt really a rock band and is only tangentially part of the American music industry.  Garcia is indeed charismatic, but not the least remarkable of his contributions to the group is his general refusal to run it.  "You can call me boss," he once said, chuckling, "just don't ask me to make any decisions." That is why the fans, the colorful, exuberant Dead Heads gathered outside, are members of a cult that at its best serves Dionysus rather than individual performers, and why the police, veterans of these parking lot festivals, understand the benign nature of their guests and are smiling at them.

Afew days earlier the gig had been at a music theater out in the country.  The endless sleepy commute, a forty-five-minute spin on an unfamiliar road from a generic RamadaMarriottSheraton, through endless geometrically identical cornfields, to a resort nowhere in particular, induced a feeling of absolute random disassociation.  Conversation was desperately required, and centered on Lesh's newly purchased book about the anthropic principle, which posited the universe as a mind.

Obeying an unspoken protocol, Scrib had left the front seats to the band and retreated to the back of the van---limousines are thought too conspicuous---to consider the band's personalities in archetypal terms.  Garcia is a powerful bohemian visionary, a shaman of a sort, and his perşsonal style has largely defined the band's social and musical structure.  Yet his role is nothing like that suggested by the automatic attention paid to a virtuoso rock guitarist or the guru figure the media have fabricated in his name.  The band's candidate for Handsome Rock Star is Weir, the eternal Younger Brother.  But on a day-to-day basis, the psychic pivot to the Dead is Phil Lesh, the most aggressive purist, the anti-philistine Artist.  It is he who most often and most loudly demands that they dance as closely as possible to the edge of the nearest available precipice.  Intellectual, kinetic, intense, he was once nicknamed Reddy Kilowatt in recognition of his high mental and physical velocity.  Twenty years later his mind is still exşceedingly agile, although on this day he was content to let Garcia dominate the rap.

"Why would the universe go through the trouble of evolving consciousness?" inquired Garcia.  "If it wanted life that would succeed, just to create the most effective living thing, it could have stopped at bacteria.  Or it could have stopped at vertebrates or sharks.  But consciousness goes a quantum step further than just life.  It might be that consciousness is the whole reason there is a universe.  There might not be a universe apart from consciousness." Garcia lit another Pall Mall.  ôAnd who knows what it's like elsewhere in the universe?  Local realities change enough, locally, that those Hindu guys can walk through huge, blazing fires and not get burned.  It's got to be that consciousness modulates reality.  Besides, the truth canĺt only be here, or you could stare at your toes and figure it all out."

"Yeah, but that's just solipsism, man, useless," interjected Lesh.  "All you do is climb up your own verbal asshole."

"The real black hole," snickered Kreutzmann as Scrib reached for his pen while trying to imagine the members of Led Zeppelin in a rapt discussion of teleology and human consciousness.

Today the vans arrive at the usual 6 p.m. as Taylor finishes with the steward and sends Scrib to the crew bus to inform Parish that the band is onstage.  Blond and sophisticated, tour manager Jon McIntire emerges from the lead van and heads for the stage.  Wise to his rhythm guitarist's fondness for preshow tinkering, he tells Taylor, "Let's get the doors open.  Weir might want to do something." Not all band arrivals have been so orderly.  Once in the early 1970s, Weir and Ram Rod's wife, Frances, equipped with a guitar, identification, and sincerity, were unable to persuade a guard at one venue of their legitimacy.  Ever polite, Weir waited until the gentleman no longer stood in front of the gate, then drove his rented car through it to the backstage area.  Taylor turns to the promoter's security chief, whose shaven head and earring suggest a fierceness that is fortunately never displayed, and signals for the doors to be opened.

By 7 p.m. the crew members have taken their places onstage as most of the musicians digest dinner in a common dressing room.  The drummers drill away on rubber practice pads and Weir works at his own exerşcise/Útude, "Sage and Spirit." Garcia warms up in the opposite corner, his small, grubby hands bulging with muscle as they run endless scales up and down his custom Irwin guitar.  Lesh sits onstage talking with his wife, Jill.  A few minutes before showtime, a security guard shepherds Dan Healy and Candace Brightman, directors of sound and lights respectively, to their enclosure out in the audience.  The anticipatory roar goes up several decibels as the crowd spots sound engineer Harry Popick taking his position at the onstage monitor soundboard.

McIntire finds his various charges and announces, "Time, guys." Weir has still not traversed the Útude to his satisfaction, and calms his anxiety with a shot of brandy.  Mydland gulps glycerin to coat his vocal cords and gets the usual reaction; the final backstage signal of an oncoming Dead concert is the sound of retching.  Straggling out more or less in line, the musicians drift onto the stage.

Taylor leans over and murmurs into his headset, "House lights."  ##

CLICK HERE TO GET TO CHAPTER ONE OF 'A LONG, STRANGE TRIP'

CLICK HERE TO GET TO 'NOT FOR DEADHEADS ONLY: DENNIS MCNALLY, PH.D.' A 1994 INTERVIEW WITH THE AUTHOR

You can purchase a copy of 'A LONG, STRANGE TRIP'
from the DeadNet online store.

ST. JERRY OF THE DEAD

AN EXCERPT: AT HOME WITH JERRY GARCIA
MOON JASMINE