THE MANTRA IN BLACK:
10 REASONS WHY JOHNNY CASH ALWAYS MATTERS 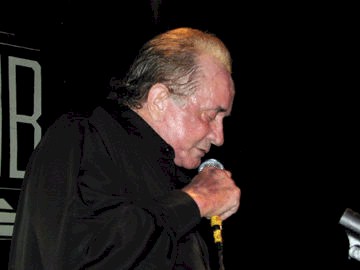 Without a red hot and blue band to back it all the way up, even a Man in Black's powers weaken considerably.  That's why, before first setting out to conquer the world as we knew it, Johnny Cash planted firmly behind him that Tennessee Three so widely known and regarded as Marshall Grant (bass), W.S. "Fluke? Holland (drums), and guitarist-extrordinaire Luther Monroe Perkins (no relation to Carl though).  And what stellar accompanists they were "particularly the deceptively unassuming Luther (?he's been dead for a couple of years but just doesn't know it yet? is how Johnny often introduced his laconic right-hand guitarist on stage back in the day).  Yet note how most people, myself included, still can't help but instinctively pick Perkins? distinctive boom-chicka whenever an amplified Telecaster is in hand.  Once asked why he persisted in rooting himself to the mere bottom rungs of most every chord he fingered whilst his contemporaries raged blindly up and down their respective necks, Luther drolly replied "well, I guess they're still huntin? for the right notes.  But I already found "em."

His brief backstage appearance crooning I Still Miss Someone in good pal Bob Dylan's Eat The Document severely notwithstanding, perhaps Johnny's lean, mean vintage performance persona is best exemplified -- and fortunately forever preserved in perfectly kinescopic black and white " courtesy of that late-Fifties Army recruiting propaganda-fest Country Style USA.  The rending therein of Big River in particular is absolutely astounding to see and hear even now, as Cash attacks the song " especially its signature G-chord flourishes " with a fervor even Don Everly at his amphetamine crankiest would be heart-pressed to match.  Head bobbing, jerking and weaving as he defiantly spits out each and every stanza on behalf on Uncle Sam, the man is nothing short of, in the words of no less an expert than Marty Stuart, "wired and on fire."  Check this out on the recently re-released Johnny Cash Anthology clip collection and thrill for yourself.

Then, while you're at the video store, grab as well that freshly-restored issue of Robert Elfstrom's Johnny Cash: The Man, His World, His Music.  In the great Arriflex-on-the-wall tradition of that other perfectly timeless 1969 documentary Gimme Shelter, the camera tails Johnny as he sadistically fondles a crow in his backyard, rummages through the broken remains of his childhood home, ruminates at the site of the Wounded Knee massacre, waxes extremely philosophic on his tour bus and, you bet, rips it up in front of a typically receptive captive audience.  Then immediately afterwards he not only auditions a hopeful young singer backstage, but instantly sets up a session for him at Columbia Records "as the boy stands understandably speechless in rapt appreciation.  All in a night's work for the hardest-working man in country music, no?  Meanwhile, back home on the small screen"..

With initial sales of his eponymous long-playing debut stalled in the dangerously low-five-figure zone, "John Hammond's Folly," as Bob Dylan was nicknamed "round Columbia Records Corporate H.Q. circa "62, was about to be given the ol? heave-ho off the label.  Until, that is, Johnny Cash, hot off his Columbia hit Ring Of Fire, graciously put in The Good Word and paved the way for Blowin? In The Wind, It Ain't Me Babe (later cut by Cash himself), and so many others.  One good turn naturally deserving another five years later, when ABC Television blessed Johnny with his very own hour of weekly prime time Bob happily agreed to make one of his too-few TV appearances alongside his saving grace to perform their Girl From The North Country duet "as only two such joyously untrained harmony singers ever could.  But even more riveting was 1971's special Johnny Cash On Campus episode, wherein The Man hauled crew, cameras, the student body of Vanderbilt University and even Neil Young just for good measure directly into the Ryman Auditorium for an evening which climaxed with the first-ever public performance of his brand new signature tune, Man In Black.  "I wear it for the thousands who have died, believing that the Lord was on their side," Johnny defiantly sang.  "Introducing another new single Johnny Cash won't be able to perform at the White House,? the Columbia Records press release proudly announced the following week.

But Man in Black does not live by social comment alone.  Indeed, it was quite common for Johnny to invite his televised Johnny Cash Show guests back to the homestead for a post-taping respite of spirit and song.  Following The Monkees? July 1969 appearance on the show -- highlight of which was the freshly Tork-less trio joining their host for Everybody Loves A Nut  -- Davy Jones took up the offer to chill out chez Cash for the weekend, knocking Johnny's Monkee-mad daughter Rosanne for several loops when she found him nonchalantly sitting at the breakfast table the next morning.  Then there was the momentous evening Johnny had another few friends over for a song swap.  When the guitar was duly passed "round and everyone present was told to try out a new one, Graham Nash offered Marrakesh Express, Kris Kristofferson premiered Me And Bobby McGee, then Bob Dylan applied his brand new boudoir voice to a plaintive Lay Lady Lay.  As if this wasn't all one night's entertainment enough though, the inimitable Shel Silverstein then decided to test-drive a strange new number he hadn't even considered shopping across Music City just yet.  Johnny wanted to hear it though"..

'that's the most cleverly written song I've ever heard," The Man responded, and luckily June Carter thought enough to stuff Shel's cheat sheet into her husband's bag before they departed for the next day's recording session over at San Quentin State Prison.  "I didn't even know the lyrics," Johnny recalled of making his quickest, biggest hit.  "I had to put the words on a music stand in front of me.  I told 'em I want to sing a song called A Boy Named Sue.  Well they laughed, you know, and I said, 'No, it's not what you think.  Let me sing it to you."  I read the lyrics off the paper in front of me, and that was the record."  And that summer, only the Rolling Stones and their honky tonk women could keep Sue off the very top of America's Hot One Hundred.

But my own fave rave from among Johnny's voluminous 500-album, 1500-song-and-counting catalog was cut the night of September 10, 1969 at Columbia Music Row Studios, Nashville.  By now Carl Perkins (no relation) had just replaced the late great Luther on guitar, yet his patented blue suede notes perfectly matched Johnny, line by lascivious line, in positively sneering Billy Edd Little Brown Shack Out Back Wheeler's ode to the fairer of sex:  "What she does simply walkin' down the sidewalks of that city makes me think about a stray cat gettin' fed," our hero snarled, "and I got tiny white blisters in my throat from tryin' to ease my nervous tension takin' all them pills.  She's got a body, oh yeah!?  Why Johnny, you dirty old egg-sucking dog you!  (?what a mighty crazy cookin' way to go though, right?)

8. BALLAD OF A TEENAGE QUEEN

Still, behind every great man -- those in black included -- stands a woman who, as John Lennon once observed, makes 'the other half of the sky."  For John R.  Cash, that woman was, and could have only truly been, Valerie June Carter.  He first spotted her when, as a high school senior, his class took a trip to see the Carter Family play the Grand Ole Opry.  "I'd liked what I heard of her on the radio," Johnny recalled in his 1997 autobio, "and I really liked what I saw of her from the balcony at the Ryman Auditorium."  Six years later, now a performer himself, Johnny was back at the Opry "and so was June (hot off a water-skiing adventure with Elvis, I kid you not).  "You and I are going to get married someday? were among his first-ever words to the already-married young woman.  "Really?? she replied.  "Well, good.  I can't wait."  And a decade later they were, yes, married in a fever, and remained so until she passed, four months ahead of her man, in 2003.  Right to the very end and beyond, Johnny remained both devoted and indebted to his "poor valley girl," and as June had promised him years earlier, 'till the mountains split open with the weight of the sun, we'll rise up together "as one."

It was from the balcony of an altogether different auditorium " Roy Thomson Hall in Toronto " where I personally first saw both June and Johnny perform together, sometime during those dreaded mid-Eighties.  You see, it was then that the Reaganomic phenomenon known as the Automatic Teller Machine had first crossed northward into my home and native Canada, and every self-respecting financial institution in the land was scurrying to be the first to introduce this new wonder to their most valued customers.  Still, I was more than quite unprepared altogether, upon entering my local Canada Trust branch very late one night, to come face to face with a life-size cut-out of The Man In Cardboard lurking over in the corner of the darkened lobby.  Yes, it turns out my financial institution had bartered a deal to have you-know-who be their celebrity spokesperson, and each brand new A.T.M. they installed was christened " you guessed it " a Johnny Cash Machine.  This brazenly un-Canadian act of corporate whoring aside, a quick flash of my shiny new Johnny Cash Card (along with a ten dollar bill) did allow me entrance to a special customers-only Johnny Cash Canada Trust Concert that fall, wherein June, hotter than a pepper sprout and then some, joyously high-stepped her dancing shoes clear off and over the wax-painted heads of that austere Roy Thompson audience, Johnny bar-stormed through his many many hits at near-Ramone intensity and, "way over in the corner on the Telecaster?  Why, ladies and gentlemen, it was none other than Buddy Holly's last bass player, Waylon Jennings!  Needless to say my fellow A.T.M. enthusiasts and I had a grand ole time "but en route home later that night I must admit I never was successful in thieving any of those cardboard Cashmen from their bank lobbies:  They?d all been strategically fastened to the floors with chains.

And so, the end nears.  But true brave artists, like the very finest of wines or Ren and Stimpy cartoons, only seem to improve with the passage of time.  Yet nobody but nobody " quite possibly not even The Man himself " could ever have prepared for the naked beauty and raw splendor which were the sonically stark series of albums Johnny made during the final decade of his all-American career.  Thank heavens Rick Rubin most obviously picked up on how the Eighties, and Mercury Records especially, had stupidly squandered the abundant Cash bounty on a series of ill-advised "big hat? productions and all-star Yesteryear groupings, and instinctively knew just what to do:  Set Johnny up on a stool in his living room -- or the Viper Room, throw up a couple of mics, simply press 'record? and let the magic flow.  The initial result was that TRULY alt.-country masterpiece Delia's Gone (and its accompanying video wherein J.C. wastes uber-waif Kate Moss away with a single round from his 'sub-machine?).  Beauty, eh?  Then a further four full Rubin-directed discs followed, culminating with what is likely to be Johnny's fifty-fourth (!) and benedictory hit, Hurt.  P.S.: and the Old Testament video for that one actually won Johnny an MTV Award "but alas, the man never made it to New York in time to collect.

CLICK HERE TO GET TO INDEX OF COLUMN NINETY-NINE