SEEKS LAW TO AVERT THIS:
ON ELECTION DAY 2004, HOW WILL YOU KNOW IF YOUR VOTE IS  COUNTED? ANSWER: YOU WON't 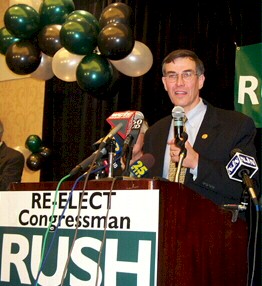 Washington, DC " Rep. Rush Holt today responded to the growing chorus of concern from election reform specialists and computer security experts about the integrity of future elections by introducing reform legislation, The Voter Confidence and Increased Accessibility Act of 2003. The measure would require all voting machines to produce an actual paper record by 2004 that voters can view to check the accuracy of their votes and that election officials can use to verify votes in the event of a computer malfunction, hacking, or other irregularity. Experts often refer to this paper record as a "voter-verified paper trail."

"We cannot afford nor can we permit another major assault on the integrity of the American electoral process," said Rep. Rush Holt. "Imagine it's Election Day 2004. You enter your local polling place and go to cast your vote on a brand new 'touch screen? voting machine. The screen says your vote has been counted. As you exit the voting booth, however, you begin to wonder. How do I know if the machine actually recorded my vote? The fact is, you don't."

Last October, Congress passed the Help America Vote Act (HAVA), groundbreaking election reform legislation that is currently helping states throughout the country replace antiquated and unreliable punch card and butterfly ballot voting systems. HAVA, however, is having an unintended consequence. It is fueling a rush by states and localities to purchase computer-voting systems that suffer from a serious flaw; voters and election officials have no way of knowing whether the computers are counting votes properly. Hundreds of nationally renowned computer scientists, including internationally renowned expert David Dill of Stanford University, consider a voter-verified paper trial to be a critical safeguard for the accuracy, integrity and security of computer-assisted elections.

"Voting should not be an act of blind faith. It should be an act of record,? said Rep Rush Holt. "But current law does nothing to protect the integrity of our elections against computer malfunction, computer hackers, or any other potential irregularities."

There have already been several examples of computer error in elections. In the 2002 election, brand new computer voting systems used in Florida lost over 100,000 votes due to a software error. Errors and irregularities were also reported in New Jersey, Missouri, Georgia, Texas, and at least 10 other states.

"A recount requires that there be a reliable record to check," said Holt. "Without an actual paper record that each voter can confidentially inspect, faulty or hacked computer systems will simply spit out the same faulty or hacked result. Every vote in every election matters. We can and should do this in time for the 2004 federal election."

Key provisions of The Voter Confidence and Increased Accessibility Act of 2003 include:

1) Requires all voting systems to produce a voter-verified paper record for use in manual audits and recounts. For those using the increasingly popular ATM-like "DRE?(Direct Recording Electronic) machines, this requirement means the DRE would print a receipt that each voter would verify as accurate and deposit into a lockbox for later use in a recount. States would have until November 2003 to request additional funds to meet this requirement.

2) Bans the use of undisclosed software and wireless communications devices in voting systems.

3) Requires all voting systems to meet these requirements in time for the general election in November 2004. Jurisdictions that feel their new computer systems may not be able to meet this deadline may use an existing paper system as an interim measure (at federal expense) in the November 2004 election.

4) Requires that electronic voting system be provided for persons with disabilities by January 1, 2006---one year earlier than currently required by HAVA. Like the voting machines for non-disabled voters, those used by disabled voters must also provide a mechanism for voter-verification, though not necessarily a paper trail. Jurisdictions unable to meet this requirement by the deadline must give disabled voters the option to use the interim paper system with the assistance of an aide of their choosing.

5) Requires mandatory surprise recounts in 0.5% of domestic jurisdictions and 0.5% of overseas jurisdictions.  ##

CLICK HERE TO GET TO INDEX OF COLUMN NINETY-SEVEN