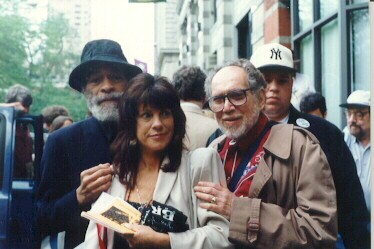 Ted Joans wasn't a musician but he knew how to blow his own horn.

"I'm not one of these "major Beat poets??---and he held up his fingers to signify quotation marks---?but I'm one of the most important ones."

That's what he told me when I first met him many, many years ago, back in 1958 when the New York Post assigned me to write a feature series about the Beat Generation. As I remember, we were in the Gaslight Caf? on McDougal Street and Ted was looking for publicity. He started telling me about an idea he had to write something that I thought was entitled A Point of View.

I'd already heard about Ted as a poet who was into music. His reputation was that he made music with words. He was a jazz poet. A be-bop jazz poet. And he ended up always running around the world and spreading his reputation. I got to envy him. I'd always wanted to be a world-traveler like he became.

This aint the story
I wanted to write
about Ted

Broadway with Gerry Nicosia, Jan Kerouac and her cousin, Paul Blake III when out of nowhere Ted comes walking towards us.

Ted had just gotten back to New York from Paris. At the time, Jan, Gerry and I are due to give a reading at Dean and Deluca and Ted asks if he can read, too.

But Dean and Deluca have given us only so much time.

"I still wanna write a story about you," I tell him.

"We'll get together sometime," he replies and we each go our ways.

I'd wanted to interview Ted since I'd met him but, like I say, he was always on the run. Paris. Timbuktu. San Francisco. Vancouver. No, I never gave him the publicity he wanted. All those times I wanted to sit down with him for an interview, he was somewhere else.

Whether or not Ted considered himself one of the "major? Beat poets, I certainly do and the Beats, of course, have made a major impact on the world. I think it was Shelley who said poets are the legislators of mankind. I agree, but even in their collegiality, I've also found poets often to be a quarrelsome, backbiting and egotistical lot. Except for poets like Ted. He was always sweet, kind, gentle, fun-loving, light and humorous.