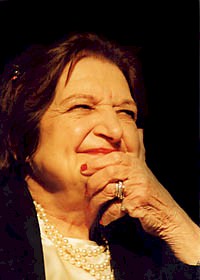 Is George W(armonger) Bush competing with Richard (I Am Not A Crook) Nixon to go down in history as the worst President in American history? Nixon had an "Enemies List? and now Georgie has one, too. And who's at the top of Georgie's list? Osama bin Laden? Unh, unh. Saddam Hussein? Hardly.

Turns out that Georgie's chief  "enemy? is none other than 82-year-old Helen Thomas, who has been covering the White House for Hearst Newspapers for 42 years. Why does Georgie hate her so much? Because she has bigger balls than any other reporter covering the unelected President's press briefings. Here's an example of Helen's ballsiness, as reported in Harper's:

From a January 6 exchange between White House Press Secretary Ari Fleischer and Helen Thomas, a columnist for Hearst Newspapers.  Thomas, who eighty-two years old, has been covering the White House for forty-two years.

ARI FLEISCHER: Good afternoon and Happy New Year to everybody.  The president began his day with an intelligence briefing, followed by an FBI briefing.  Then he had a series of poli?cy briefings.  And this afternoon, the president will look forward to a Cabinet meeting where the president will discuss with members of his Cabinet his agenda for the year.  The president is going to focus on economic growth, making America a more compassionate country, and providing for the security of our nation abroad and on the home front.

And with that, I'm more than happy to take your questions.  Helen.

HELEN THOMAS: At the earlier briefing, Ari, you said that the president deplored the taking of innocent lives.  Does that apply to all innocent lives in the world?  And I have a follow-up.

FLEISCHER: I refer specifically to a horrible terrorist attack on Tel Aviv that killed scores and wounded hundreds.  And the president, as he said in his statement yesterday, deplores in the strongest terms the taking of those lives and the wounding of those people, innocents in Israel.

THOMAS: My follow-up is, why does he want to drop bombs on innocent Iraqis?

FLEISCHER: Helen, the question is how to protect Americans, and our allies and friends---

THOMAS: Have they laid a glove on you or on the United States, the Iraqis, in eleven years?

FLEISCHER: I guess you have forgotten about the Americans who were killed in the first Gulf War as a result of Saddam Hussein's aggression then.

THOMAS: Is this revenge, eleven years of revenge?

FLEISCHER: Helen, I think you know very well that the president's position is that he wants to avert war, and that the president has asked the United Nations to go into Iraq to help with the purpose of averting war.

THOMAS: And he thinks they are a threat to us?

FLEISCHER: There is no question that the president thinks that Iraq is a threat to the United States.

FLEISCHER: The Iraqi people are represented by their government.  If there was regime change, the Iraqi---

THOMAS: So they will be vulnerable?

FLEISCHER: Actually, the president has made it very clear that he has no dispute with the people of Iraq.  That's why the American policy remains a policy of regime change.  There is no question the people of Iraq---

THOMAS: That's a decision for them to make, isn't it?  It's their country.

FLEISCHER: Helen, if you think that the people of Iraq are in a position to dictate who their dictator is, I don't think that has been what history has shown.

THOMAS: I think many countries don't have---?people don't have the decision---including us.  ##

The Senior White House Press Corp Member Helen Thomas has been attacked and is being smeared by Bush and Co.

Not since Richard M. Nixon made an enemies list of those in the press and in politics who disagreed with his policies has a U.S. President launched a public personal attack on a specific American journalist.

Bush and Co. are out to "get" Helen Thomas. Helen Thomas is a national treasure, and she has had the intelligence and bravery to declare that George W. Bush is "the worst president in American history"!

It's time for supporters of Helen Thomas to step up to the plate and protect and defend her from the Bush Family & Friends Assassination Machine.

Write to Bush and tell him to call off his dogs. Write to any and every newspaper and TV person you can think of and urge them to come to Helen Thomas' aid. Remind them that anyone who protects and defends Helen in this hour of crisis defends Freedom of Speech for ALL journalists!!

The Hotline reports, George W. Bush has mobilized the Republican National Committee to beat up the outspoken truth-teller, venerated senior White House correspondent, and "First Lady of the press," Helen Thomas, because she has DARED to criticize his public policies. Helen Thomas has had the courage to say what many are thinking, that Bush is "the worst president in all of American history." For exercising her First Amendment freedom, the entire Republican Party smear machine has now been deployed against the brave and distinguished journalist.

The Republican National Committee has sent out a full-scale call to the hardline partisans in its email data base to destroy Ms. Thomas in response to her criticism of their "president." By singling her out, the Republicans seek nothing less than to intimidate the entire press corps:

PRESS PASS: GOP Asks Activists To Take On Helen Thomas In response to Helen Thomas' recent column naming Pres. Bush "the worst President in all of American history," the RNC is asking supporters to "Call Her Out."

Where are the editorials in the New York Times and in the Washington Post? Where are the press freedom groups and journalists' defense organizations? Where are Daniel Schorr, Mary McGrory, and all of the other surviving targets of Nixon's "enemies list"?

Above all, where is the board of the White House Correspondents' Association, now that their courageous colleague Helen Thomas---who has covered every president since John F. Kennedy, and always commanded the utmost respect---has been targeted in Bush's Nixonian campaign to smother all criticism?

* Email the Reporters' Committee for Freedom of the Press and Bob Deans, President of the White House Correspondents Association, to demand public statements defending Helen Thomas's freedom of expression and denouncing George W. Bush for attempting to suppress it.

* Email Helen Thomas to express your full support against George W. Bush's and the RNC's outrageous smear campaign against her.

Read this Call to Action at:
http://www.mediawhoresonline.com/

--Reporters' Committee for Freedom of the Press at:
rcfp@rcfp.org

DAVID BROOKS at the Weekly Standard: --

WILLIAM KRISTOL at the Weekly Standard: --

TED KOPPEL at NIGHTLINE (or other ABC newspeople) --

DAN RATHER (or anyone) at CBS News --

The Newshour with Jim Lehrer -  newshour@pbs.org

CLICK HERE TO GET TO INDEX OF COLUMN EIGHTY-SEVEN