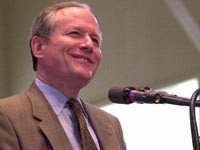 [The warmonger Bushies who swindled themselves into control of America have an in-your-face website that details their Hitlerite plans to conquer the world. But---other than Ted Koppel, who devoted approximately half of a Nightline program to it---has Dan Rather, Peter Jennings, Tom Brokaw, the New York Times or any of America's so-called "liberal? media paid any attention to this website? Of course not! The media is NOT "liberal? and it's too chicken to do so. The warmongers say that to dominate the world is "America's manifest destiny." They don't care if Iraq disarms or not. They've made up all kinds of excuses---including the necessity of a 'regime change? in that country. They want WAR! Period. Then next is Iran. And then next is a nuclear war with North Korea. Not the majority of Americans and not the majority of the world see any reasons for invading Iraq. But these warmongers don't even care if the rest of the world starts sending cruise missiles OUR way. Have you noticed the smirk pasted on Dumb Dumbya's face every time he gives a speech full of lies? His message is "FUCK the UN! FUCK the majority of Americans! FUCK the rest of the world!" Obviously, the only country that needs a 'regime change? is America. To see what our warmongers plan for us, please click on http://www.newamericancentury.org/]

I have seen several recent emails about the PNAC (Project for the New American Century), and how it is the agenda driving our Iraq (and entire middle east, and even global) policy. It is essentially a policy of manifest destiny, that we are such a great nation that we need to go throughout the world changing governments into our image and asserting our vision and "leadership." Last night on Night Line, William Kristol, the chairman of PNAC, was interviewed and openly admitted that they were driving U.S. foreign policy now. Their committee has something like 40 members, 20 of which are now in top Bush administration positions (including people like Cheney, Perle, and Rumsfeld). The URL above has way too much information to be

Must our sons and daughters die to satisfy the ambitions of these Hitlerite kooks?

assimilated easily, but if you look around you can find the whole thing laid out in frightening detail. America is going to rule the world... and after all, why shouldn't we! If you want to see some self-fulfilling prophecies, read some of the project memoranda from back in 1998 and 1999. Everything being done is planned to "enhance American leadership in the region."

If you believe that America should lead (control?) the entire world,  then you'll find a master plan for you to follow laid out there. Good luck to you. If, like me, it concerns you that the U.S. agenda is to become world-makers, to assert global American "leadership," and to remake every other nation in our image, then you will find this site extremely frightening. Whether you like it or not, the PNAC is clearly running the show, and I sure didn't vote for these people. This site, for any intelligent person, puts the lie to the argument that we are going to attack Iraq simply to disarm Saddam. Kristol admitted as much on Night Line last night. It is all about global American leadership (domination?).

What is really scary is to see the level of grandiose thinking in the PNAC. These people really believe they (we) have the right to run the world, and post their site on the Internet with their important memos and correspondence for everyone to read. Their level of boldness scares the hell out of me. ##

CLICK HERE TO GET TO INDEX OF COLUMN EIGHTY-SEVEN