THE BOY EMPEROR:
WE ARE BEING RULED BY
POWER-CRAZED MADMEN 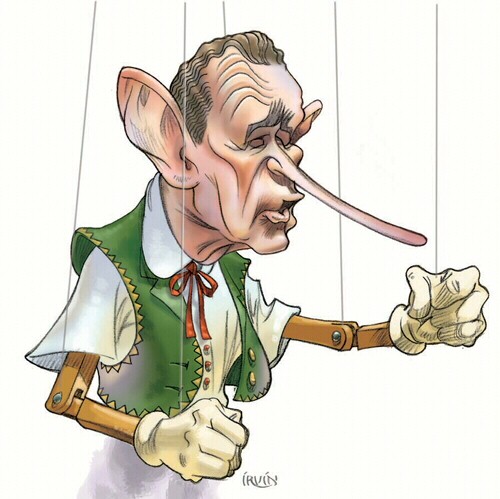 It's quite clear to any sane person in this world that there is absolutely no good reason to war with Iraq at this point in world history---no good reason other than those insane thoughts polluting the so-called minds of our Boy Emperor and his cowardly band of power-crazed Chickenhawk madmen. Yes, their lust for power gives them loony reasons of their own. And, like all tyrants who ever lived, they want others to die fighting their war for them.

Does Iraq threaten America more than North Korea? No, North Korea holds South Korea in nuclear hostage while it churns out more nukes from an assembly line. Along with missiles that are already capable of delivering those nukes to America's West Coast. The only weapons of mass destruction in Iraq's arsenal are the ones George W. Bush keeps assuring us are there. And we all know how deceitful he is.

He even had Tony Blair's British Intelligence cook up a so-called dossier detailing the great extent of Iraq's hidden weapons of mass destruction. Except the dossier has now been exposed as having been plagiarized from student papers and magazine articles. Otherwise, our Boy Emperor keeps repeating the same mantra:

So look what the Boy Emperor is doing to his own people!

So badly does he want us to go die for him that he deluges us with false or unsubstantiated details that prove nothing. He wants to make us believe that Saddam's about to hatch the big one. That Saddam is a greater threat to the U.S. than Kim Jong-il. Meanwhile, look at the Boy Emperor's nose. See how his nose keeps growing longer.

Bush reminds me of a Pinocchio, a marionette carved out of the same tree from which all those other dummies came---the dummies that believe their wealth and power entitle them to rape the earth with impunity. They all come from the same tree and they all have the same instinct. Their instinct tells them to punish the poor for failure and reward the rich for success. And their way to get rid of poverty is to grind the poor out of existence.

Who carved Pinocchio? Let's call him Pin for short, not because he's a pinhead, because he's not. He's a blockhead. Right now, a swelled blockhead. To be acclaimed Boy Emperor has gone to where his brains are not. To his family, he'd been the family idiot. To the other dummies from the tree of the rich and powerful, he'd been just another dummy. But look at him now! He is a hero among them. With his swelled blockhead, he goes among them dispensing the contents of the country's treasury, its natural resources and its wealth. The same way Rockefeller used to hand out dimes to the poor, Pin gives away the country to the other dummies carved from his tree--- the tree of the rich and powerful. Have you ever seen what happens to wood when it swells?

He's still made out of wood. He can't feel. He can't feel emotions---emotions such as fear so he's fearless. That's what got him acclaimed Boy Emperor in the first place---his fearlessness. Osama bin Laden did the Boy Emperor too great a favor when he destroyed the WTC and many of its occupants. That made the fearless Boy Emperor a hero. A wounded nation demanded a counterattack. Fearless Pin led the counterattack and that carried him to even greater heights. But now he's running out of victories. Terrorist-hunting is getting dull. Seems nobody wants to collect the $25 million reward for Osama's head. Pretty soon the country might start worrying about the fact that the Boy Emperor has taken it broke.

He's certainly too wooden to feel any of the grief he's about to inflict on the world with the mass slaughter he intends---the slaughter of America's sons and daughters and those of the Iraqis. To

Do we have to go out in the streets and bang on pots and blow whistles?

a boy like Pin, the Army and Navy and Air Force are not masses of humanity. They are toys! That's how Emperors are supposed to think. And isn't he an Emperor?

In his court, his advisors are as non compis mentis as he is. An "old boy? gang of corporate crooks fashioning a right-wing dictatorship. Any one of them could have been guilty of saying something like the following:

"Why of course the people don't want war. Why should some poor slob on a farm want to risk his life in a war when the best he can get out of it is to come back to his farm in one piece? Naturally the common people don't want war: neither in Russia, nor in England, nor for that matter in Germany. That is understood. But, after all, it is the leaders of the country who determine the policy and it is always a simple matter to drag the people along, whether it is a democracy, or a fascist dictatorship, or a parliament, or a communist dictatorship. Voice or no voice, the people can always be brought to the bidding of the leaders. That is easy. All you have to do is tell them they are being attacked, and denounce the peacemakers for lack of patriotism and exposing the country to danger. It works the same in any country."

Actually that's a quote said to have come from World War II  Nazi Luftwaffe commander Hermann Goering before the fat slob escaped the hangman's noose after his Nuremberg trial by swallowing a smuggled cyanide capsule the night before his scheduled execution. But what Goering said is exactly what the Boy Emperor is doing---he's shoving a war down the throat of a country that doesn't want a war.

The whole world has told us it doesn't want a war. Do we have to start banging pots and pans and blowing whistles like they did in Serbia? The Boy Emperor is playing with America the way Slobodan Milosovic played with Serbia. Pin is leading America down the same road Milosovic took. Stir up a patriotic nationalism. Start a couple of wars you can win. And then what happens? The world gangs up on you. Does Pin want to end up being arrested as a war criminal like Milosovic?

France, Germany, Russia and China---they're already ganging up on the Boy Emperor. They think the Boy Emperor has gone too far. Well, hasn't he? He's leading a tyrannical government that keeps its machinations secret while trying to force us to swallow a needless war! He's trying to initiate mass slaughter for the sole satisfaction of what could boil down to nothing but his own personal ego! How do we protest? Again I ask. Do we bang on pots and pans and blow whistles?

These people in power have already proved themselves crazy, crass and craven enough to send out their own Timothy McVeighs to commit acts of domestic terrorism just to create the chaos in America necessary for the Boy Emperor to declare a national emergency, suspend the Constitution and establish a military dictatorship. There's no end to the evil this government can invite.

In fact, I---for one---wonder if the Boy Emperor is also wooden enough to think America can win a thermonuclear war.  ##