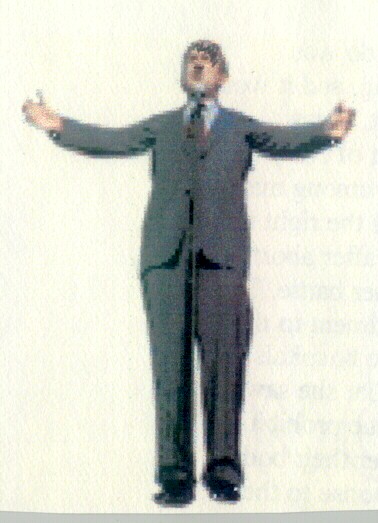 I dream I am in Nazi Germany. A commentator, obviously relishing the coming war, is interviewing a colonel, a military expert, who, also with great relish, explains how easy the invasion is going to be.

In my dream, I see him wearing the authoritarian peaked cap of an officer of the Nazi Wermacht. He is smiling confidently as he uses a long pointer to show on a map the places he's talking about. The commentator has a face that looks like a German moon.

"We will enter the country from the north and from the south," the colonel continues. "Our troops are well trained in urban warfare. In the city, they know how to fight house-to-house. Urban warfare will be the greatest danger to our fighting men. Yes, we will suffer casualties in urban fighting. There will also be many civilian casualties. That cannot be avoided."

In my dream, I can see the invading soldiers barging into homes, going door-to-door with their fingers on the triggers of their pointed rifles. In a corner of one of the rooms a mother and her young children huddle in terror. Ratatatatatatatat! Nobody can tell me the Germans don't have a blood lust.

'they have no Navy and no air force, no eyes and ears," The colonel says with a grin on his face. "Our air campaign will be a short one."

In my dream, I see bombs dropping on homes with families inside them. Bodies lie

Did the Germans
like the karma
THEIR invasions invited?

The commentator, a buoyant fellow, makes clear how pleased he is to hear all this good news.

'they say it's going to be a cakewalk," he says.

"It shouldn't take long," the colonel replies. 'they have no eyes and ears. They have no navy or air force."

I find myself appalled. The Germans thought their butchery was fun, didn't they? Did they think it was fun when the tables were turned and they got invaded? Did they enjoy the disastrous karma that they invited? Did they like having their cities bombed and destroyed? Were they happy to see a whole generation of their men get wiped out? I don't need a dream to tell me how wrong the Germans were.

What in Heaven's name has put this dream into my head?

And suddenly I wake up to find it isn't a dream. I'm not in Nazi Germany! I?m in the good old U.S. of A. I'd fallen asleep with the TV on. CBS's morning show is blaring away. Harry Smith is interviewing CBS's military expert, a retired colonel. He's explaining the impending invasion of Iraq. No, I'm not Nazi Germany. I'm in the 21st Century's equivalent of Nazi Germany.

CLICK HERE TO GET TO INDEX OF COLUMN EIGHTY-FIVE