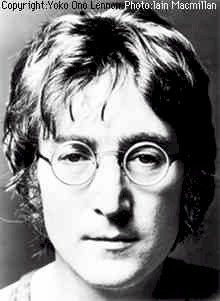 The last time I saw John Lennon, he didn’t see me.

He was standing on the curb outside the Dakota trying to hail a taxi and I was driving by in my station wagon with Jeanne Johnson, the woman who had seduced me even before the death of my wife---Norman Mailer’s ex -sweet young thing and then she was Paul Krassner’s ex-wife. She was an ex-everything, including ex-psycho ward inmate and especially ex-hooker. Yeah, she was now the love of my life.

I pulled up at the curb in front of John.

Leaning over past Jeanne in the passenger’s seat, I yelled, through the window on her side of the car:

But John refused to turn his head toward me. I would have been happy to taxi John anywhere!

Eons later, the bitch has run out at me, my world has crumbled and I’m totally out of my mind. I ‘m sitting in a poker game in Takoma Park, Maryland, with friends in the marijuana trade when a bulletin on the TV in the next room startles me. Someone has shot John Lennon! I rise from the poker table and approach the TV. Why would anybody want to shoot John Lennon? It turns out that John is dead! I sit down, unable to think what to do next. I know George Harrison is at home in Friar Park .I call George. Like me, he, too, is disconsolate---if not moreso.

“It’s like a bad Hollywood scriptwriter wrote it!” he tells me sadly. “It’s hard to believe anyone would do that to John.”

Hard to believe, except for a limp-brained, evil-minded nobody who wanted so bad to be somebody that he thought he could steal John's stardust not just by robbing John of his life but by  robbing the world of the Beatles. What selfish greed! What a monstrous crime! What a way to want to go down in history! As the man who murdered John Lennon and thereby killed the Beatles! And me, I’m burning mad! Mad beyond anger. My fury cries for revenge! I want to wipe the name of John's killer from the face of the earth.  A crime so heinous, so horrible, so inhuman, so senseless that it leaves me ambivalent about capital punishment---that kind of criminal just don't deserve to breathe the world's air. This turd should have been long ago flushed down the toilet. If you don’t want to execute him, send him to colonize the moon!

Enshrine the turd in prison and you reward him with more mornings he can awake to bask in the false glory of knowing he has become a historical figure---no matter how despicable a one. Yes, the nobody is a famous somebody at last! Notorious is a better word. Still, people come to interview him. After all, he's the nobody who killed John Lennon!

Well, we can’t wipe him out of the history books and we can’t flush either this turd or his stink down the toilet. The best we can do is try to forget his name--- If only we could. But for as long as he remains behind bars, he remains a living reminder of the awful deed he has done. As singer-songwriter Ellis Paul sings in his song called Who Killed John Lennon?, each time this turd is remembered, he as good as kills John Lennon again:

Do not mention his name.

The man kills John Lennon, now he's on TV again.
He's blaming Holden Caulfield in the face of the lens.
And each time he does it, he kills him again.
Who killed John Lennon?

A loser with a pistol, a martyr's best friend.

His lawyer must think it's a game.

Though he knows Lennon's songs, both in word and by name.
He cold calls the networks, retrieves all the funds.
Then he scrapes his percentage when the programs are run.

CLICK HERE TO GET TO INDEX OF COLUMN EIGHTY-THREE