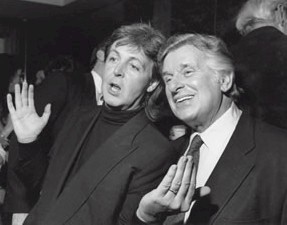 [In which Sid plans a pop festival that never happens]

I sit down to lunch with Sid Bernstein and the two of us can't fit into the same booth.  Is Sid really Santa Claus?  It's April of 1970 and over in Apeldoorn, Holland, the kids have been holding demonstrations because they want him to give them a pop festival.

Sid is more than willing. He orders filet of sole. I take veal parmigian. The trouble is that the burgomeister of Apeldoorn doesn't want more than 50,000 kids to attend and Sid doesn't know how to keep the other 100,000 away.

Tell the, truth to the burgomeister of Apeldoorn? Sid squeezes the lemon on the sole. The burgomeister has already vetoed two sites picked out by Sid, one of them so big that it could have, in Sid's own words, "squatted a million kids." The burgomeister doesn't really want the festival in Apeldoorn.  Sid pulls out an envelope full of clippings from the Dutch newspapers.  Sid has been there four times now and he's almost as big a star in Holland as Melanie.

He savors the filet.  It's just OK.  Sid knows of better, places to eat in New York.  But then how can

Sid hopes
nobody eats
the flowers

you enjoy filet of sole in New York when your mouth Is full of the taste of Apeldoorn's first World Peace and Music Festival?

He has already signed Joan Baez.  She'll do a concert for $10,000, but only on condition that he charges no more than five guilders per ticket.  That amounts, to about a buck?-thirty-five.  Then he's got Jose Feliciano, Blood, Sweat and Tears and Donovan.  He's Only going to print up 50,000 tickets, but he's also going to lay in supplies to accommodate 150,000.  Sid is the kind of, guy you'd like to see running your neighborhood candy store.

"Not that we're looking for it," Sid says.  "If we promise the mayor that there'll only be 50,000, then we'll only let 50,000 in. But if more show up, there has got to be facilities to take care of them. You can't let kids go homeless and unfed.  But we don 't want any emergency situations. We don't want any disaster areas."

If there is a disaster area, it will be right in the middle of one of the showplaces of Europe, Berg En Bos Park, so famous for its tulip beds and flower gardens that visitors have to pay 50 cents a?piece to enter.  On Sid's tickets, the cost will be 25 cents, but can you imagine what 150,000 kids would do to the place? Sid shudders.

"I have to put up a $25,000 bond against damage to the park," he says. "But we're going to keep this peaceful. Apeldoorn is only 40 miles away from the German border and there's going to be another invasion. But this time, it will be a peaceful invasion. They'll come on their bicycles with their knapsacks and my plan is to greet them with flowers, food and fruit."

Ah Sid! He's the kind of hustler who can get you the best egg creams in New York, no matter if he's in Holland. The filet of sole is long gone. Sid has to pack to go there for the fifth time.

"When that happened, the kids rose up," Sid says. 'they had to call an emergency meeting of the city council. They called me back and gave me another site. Then the mayor changed his mind again and the kids rose up a second time. It was on the national radio. They had a petition with 4,000 names. There were so many kids jamming the city council meeting that they had to put up loudspeakers outside for the 400 kids who couldn't get in."

The city council overruled the burgomeister by 40 to 10, so now Sid's back in business with a franchise on the park for August 4, 5, 6 and 7.  Except he's going to warn the burgomeister of the possibility of the 100,000 uninvited attendees.

"I have a feeling all of Europe will be focusing on this," Sid says. "But I've got to do it. I owe it to the kids."

He also hopes nobody eats the flowers.  ##