OUR LOOMING WAR WITH IRAQ---AND WITH ISLAM 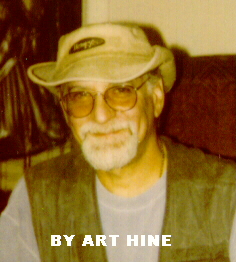 [Our Boy Emperor has it in his blockhead that he needs a war to unify our country behind him. And also to keep his fascist government in power. But by invading Iraq, he would be doing exactly what Osama bin Laden wants him to do. By falling into Osama's trap, wouldn't he be unifying the Muslim world against us?]

Let us summarize this past election as succinctly as we possibly can. The American people, with a great sigh, have resigned themselves to the historical imperative of the next Great War. Our enemy is the great oppressed Muslim majority in the world---The OUTs. These people are ostensibly one polity (e.g., "Me against my brother; my brother and I against my cousin; my cousin and I against the rest of the world." To Islamists, and faux-Islamists like Osama bin Laden, WE---the infidels--- are the rest of the world.)

All the Muslims lack to unite them into an inexorable army is only a common center, or a leader with trans-cultural appeal. The template has always been out there. Succeed and they will become the INs. Since the fall of the Ottoman Empire, Muslims across the world have been chopped apart into innumerable impotent polities. Since then, all attempts to fuse and focus Muslim polities have been opposed (naturally, one might add) by everyone else, like us.

Oil might seem the excuse that fills in the blanks that otherwise make our Iraq policy sound cartoonish (even if chillingly so!). But the only overarching truth is that ANYONE (i.e., the Mahdi, Nasser, Saddam Hussein, Osama bin Laden, et al) who tries to forge this Billion-Man polity into a force to reshape the world is a natural-born enemy of the Oligarchy that has co-opted and controls the defense of the present group of INs.

There are, however, a few complications. On the Muslim side, this is well exemplified by an experience I had myself, in Morocco. My house was broken into and everything was taken. The owner of the house, with whom I was not particularly friendly, asked me what I would want back in order not to make a big fuss.

"Perhaps," he said, he could "negotiate with the thief." Otherwise, the implication was, you could go to the police and you will get nowhere. I gave him a list that included my wife's passport and checkbook and eight notebooks, which represented my life's work. The next morning these items and one broken child's toy were found in front of my door. Two weeks later, items (like my spare eyeglasses) began showing up in the local pawnshops.

On my own, I found out the name of the thief. When I asked my best friend Haimu, a Moroccan, if he knew who this Ibrahim was, he quickly replied:

In fact, from that day forward, every Moroccan I knew referred to this miscreant as "Ibrahim, Absalom's brother, the thief."

When I asked Hamu, "What gives?" This is how he explained it to me:

"Ibrahim may be a thief, but he is our thief. When we see him coming, we put everything small

The spokesmen
for our oligarchs
are lying sons-of-bitches

and valuable in our pockets because we know. When he steals from a stranger, he embarrasses us. He has violated our sense of hospitality. It is up to us to chasten him, though. You are an outsider. He may be the lowest man in our society, but you are not even from our society. Therefore, the thief is worthy of our contempt, but we would never betray him to an outsider.

"Remember! My cousin and I against the rest of the world!"

Therefore, unless Muslims believe that Saddam Hussein must go and that they must stop him themselves, our war with Saddam will probably unite 90 per cent of the world's Muslims against us. (Many of the world's Muslims find it hard to respond similarly to Osama bin Laden. He has already proven himself capable of acting in a manner in which Muslims and Innocents--i.e., children---are randomly killed along with the supposed Infidels. "Collateral damage? is a pretty lame excuse for any educated Muslim to rationalize. But how many Muslims are that well educated?)

On our side, the oligarchs have lousy speechwriters. It would be utterly laughable, were it not so tragic, that our not too bright President is given a lame line like, "? these people [took out the Twin Towers] because they were jealous of our Freedoms and Way of Life."

Forget it. Look at a map. If Saddam Hussein were the Emperor of Nowhere, would we be going to war? But we will, inevitably, go to war in Iraq because the ruler of Iraq is trying to unite the Arab World---which is to say the Muslim world---into the major force all self-respecting Muslims believe they are.

The fact that the Imperial Bush-whackers are oil men means that we will never choose alternative energy sources as a way of avoiding, or at least postponing, the looming confrontation. There will be no postponements. Not when the White House dreams of chapters in future history books with titles like Bush II The Bold Saves the Western Hegemony. And not when such easy and provocative tools are available, such as the Tonkin Gulf big lie that one of our naval ships was attacked---Lyndon Johnson's excuse for entering the Vietnam War.

It would be stupid to believe then that the Muslim street ever could be on our side. Especially when our public rhetoric reveals to all how incredibly naive or uninformed (i.e., unlikely to prevail in the end) we are. Or, perhaps what dark, manipulative lying sons-of-bitches, the spokesmen for our ruling oligarchy indubitably are.  ##