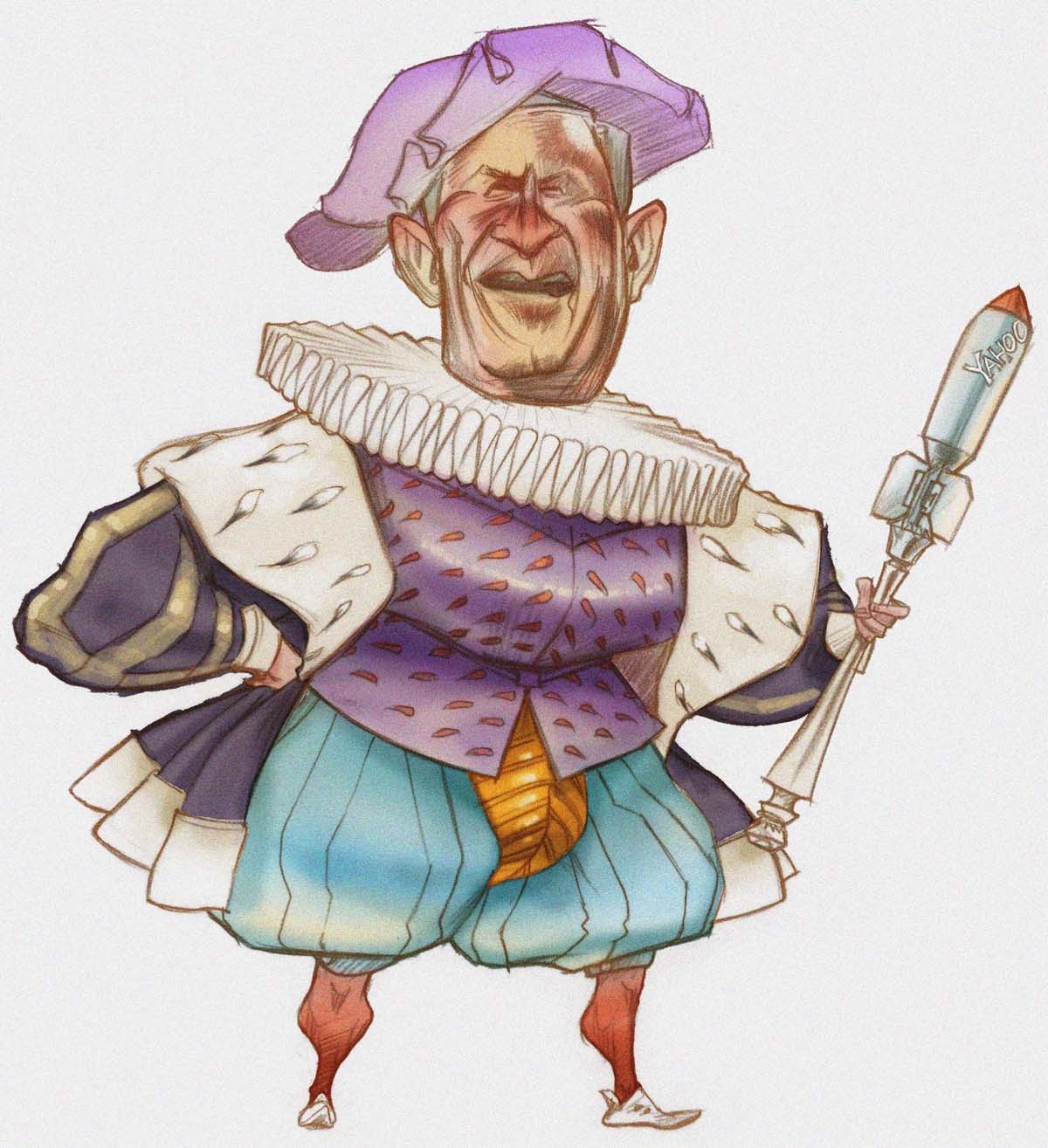 The creeping fascism unleashed by the brazen right-wing theft of America's 2000 Presidential election has now arrived at a full gallop. Did you see the Boy Emperor's self-confidence swelling over the lectern like a cloud of you-can't-touch-me gas to anesthetize the clearly cowed members of the media? All the reporters could offer afterwards was to utter the equivalent of "Duh! Duh!" or "Yessir, Yessir,  Yessir, Master!"

This was at the boy Emperor's first press conference following his electoral acclamation by America's Yahoos. The Boy Emperor is now Yahoo-In-Chief. Or else, because it doesn't matter, the Yahoo-In-Chief is now the Boy Emperor. Either way, he also can be called Dictator. Even on TV, you could see the gloat in his swagger?hard as he tried not to show it. He certainly tried hard enough to make the New York Times editorialist not see it.

The Boy Emperor's tone at his press conference was, "make no mistake about it! I'll try to be reasonable but I aint gonna take no shit from nobody. From here on in, I?m the BOSS!" Why shouldn't he gloat? He had just drawn and quartered the Democratic Party and was displaying its dismembered parts on burning crosses throughout the four corners of the nation. He had not only been acclaimed, he had been proclaimed! He was EMPEROR OF THE WORLD!

"Boy Emperor." is what Maureen Dowd of the New York Times started calling him. I've called him a lot worse. Frankly, I have as much scorn for him as I have for any idiot who thinks he can take over the world. Wasn't that what Adolf tried to do? But I imagine our Boy Emperor would rather be likened to Caesar. Or at least the Caesar into whose mouth Shakespeare---according to the Internet---allegedy put these words:

"Beware the leader who bangs the drums of war in order to whip the citizenry into a patriotic fervor, for patriotism is indeed a double-edged sword. It both emboldens the blood, just as it narrows the mind... And when the drums of war have reached a fever pitch and the blood boils with hate and the mind has closed, the leader will have no need in seizing the rights of the citizenry. Rather, the citizenry, infused with fear and blinded with patriotism, will offer up all of their rights unto the leader, and gladly so."

Isn't that the same road down which Slobodan Milosevic took Serbia? What does that matter to a fortunate son who got his degree by skipping his undergraduate classes at Yale? YAHOO! I'm told The Boy Emperor has a very thin skin and doesn't suffer insults without handing

Yes, Ralph, you're right!
There is no difference
between the two parties

out retribution the size of his Lone Star state. Which might mean that after he suspends the Constitution as part of an impending National Emergency that he intends to decree, he will rule over a Latin-American-style military dictatorship that will cause people disrespectful to him to "disappear." Turns out that in South America's "dirty wars," the Argentine military dictatorship arrested dissidents who complained too loudly, too truthfully or too boldly. What happened to these "disappeared? dissidents? Turns out they were drugged and then thrown out of airplanes into the Atlantic. Because she calls him Boy Emperor, will Maureen Dowd be among the first to disappear? Certainly not before me!

Suddenly, I'm not so infuriated any more with Nader and the Greens for throwing the 2000 election to Caesar. Turns out that the Naderites and Greens were absolutely right! There is no difference between the Democrats and the Republicans! What was called the Party of the People when my Mom and Pop named me after Al Smith has turned into a party of Repugnocrats. The Boy Emperor unsheathed his double-edge sword and the Democratic leaders of the Senate and the House were both cut off at the knees. The banging on the drums of war drowned out all the Dems? dim pronouncements.

At least the leader of the House Democrats has had the graciousness to resign, saving face by implying he did so in order to run for President in 2004. Yeah! Fat chance! But the leader of the Senate Democrats continues his charade despite the fact that he is now as relevant as, say, Yasir Arafat. When those two Democratic leaders made the mistake of voting FOR rather than AGAINST the Boy Emperor's war, either they were voting against their consciences or they had no consciences at all. They should have listened to Senators Byrd and Kennedy, the two polarities of their party. Most Americans I know are passionately against the war. But with tweedle dum on the ballot along with tweedle dee, they saw no reason to bother going to the polls. And so the Republicans, always locked in a goose-step, marched to hairline victories.

Why did the boy emperor bang the war drums so loudly? With the economy tanking and the country going broke, the Boy Emperor had no other drums to bang. Originally running under the banner of so-called "compassionate conservatism," he had duped the American people into believing he was a moderate. Moderate? He's to the right of Attila the Hun!  What's so compassionate about lusting for war? The fortunate son who once dodged his duty to face mortal combat for his country now wants to send our sons and daughters to die. Not to serve our country but only to serve his own need, which is to stay in power.

Armed with the traditional tools of the rich and the powerful'tools such as conning, lying, bribing, cheating, thieving, double-dealing, double-talking and don't forget dirty tricks or just plain mean-spiritedness'the Boy Emperor and his power-mad band of Hitlerite corporate crooks has conned our country's Yahoo electorate into believing that black is white, sin is virtue, bad is good, war is peace and hell is heaven. At first, America's Yahoo-in-chief started out as a dummy, whose his lips moved only when the people pulling the strings put words in his mouth.

But now a miracle has happened! Like Pinocchio turning into a real boy, the fortunate son once considered the idiot of his family has become EMPEROR OF THE WORLD. Obviously a fundamentalist Christian God has performed such a miracle. Suddenly, the dummy has become the most popular president in his country's history! That's enough even to make a blockhead swell. Now he can make his fingers snap like a real Boy Emperor, and he likes watching people jump. Does he ever dream of himself as a Chill Wills riding that H-Bomb all the way to its target? YAHOO! But of course he's got other things to dream about, like Hitlerian global domination.

How did he get to be the most popular president in his country's history" Obviously with the connivance, whether deliberate or otherwise, of Osama bin Laden, reportedly known to the CIA as OBL. OBL, of course, is an acronym for Osama bin Laden and CIA is an acronym to for

Central Ignorance Agency. Look at the CIA's record as a bunch of Keystone Kops who shoot down planes with Christian missionaries in them, fire missiles at Sudanese aspirin factories, mistake the Chinese Embassy in Belgrade for a bomber target and don't even bother to read messages warning that Islamic extremists are going to destroy the World Trade Center. Only when our very expensive CIA is called upon to support Latin American dictators such as Chile's Pinochet or massacre peasants in Central American revolutions can it boast of any accomplishment.

If the CIA had paid OBL to attack the World Trade Center, OBL couldn't have done the Boy Emperor a bigger favor. But wait a minute! Wasn't OBL on the CIA's payroll to begin with? Didn't the CIA feed OBL the armament al Qaeda is now using against us? Oh, that was in the cold war days, where the CIA still dwells. But,  the Boy Emperor doesn't want any criticism. He doesn't care what the nation thinks.  Keep your nose out of MY government!  And stop trying to establish a Blue Ribbon Commission to investigate the 9/11 attack. What does  the World Trade Center attack have to do with the Reichstag fire, anyway? The Boy Emperor is well aware that secrets are the tools of tyranny.

If the Boy Emperor didn't thunder at us from our TVs during his press conference,  his self-assurance did. He had just pulled off one of the greatest triumphs in American political history and it was as if he wanted his Yahoo nation to feel the goosepimples he felt. Did you ever wonder how Pinocchio-turned-real-boy felt when he experienced his first goosepimples?

My point is that I, for one, may be just another asshole, but I'm not a Yahoo. I refuse to believe all the reasons that the Boy Emperor keeps hammering at us  to justify going to war with Iraq at this time. For me, his credibility doesn't rise above that of any previous American warmonger. I believe that I am not alone among the people of America who see no immediate Iraqi threat dire enough to warrant the immediate shedding of blood, both theirs and ours. I believe that war with Iraq at this time will benefit only the Boy Emperor. And, of course, the rich. Because, after all, wars are mainly fought by working class boys, not by fortunate sons like the Boy Emperor. But most of all, the war will benefit him, the Boy Emperor, who needs war?and perhaps unending war?for political reasons. Who knows? War might even make him powerful enough to suspend the Constitution. Then he won't have to stand for re-election.  ##

WARNING!  SECTION TWO IS FOR ADULTS ONLY!  PERSONS UNDER 18 YEARS OF AGE ARE NOT ALLOWED TO CLICK ON THE FOLLOWING: