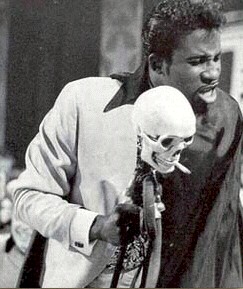 Just in case you haven't already heard, it's May of 1971 and Screamin' Jay Hawkins is back in town and he's still conniving to break into opera.

Oh, you must have heard of him somewhere in your dim past, a name that lives on its own obvious juices.  Actually, he's been back in town since last November, attracting little apparent notice and slowly going broke in a room at the Alvin, where he lives with his wife and two children.

It's been a long time since Screamin' Jay Hawkins has been in the Top 10 with anything. Look at him with his lifeguard physique, a pendant dangling from his neck, a champion of the body-snatchers.  He's 41 now but the only sign of age is the intensity in his face, the intensity of somebody who has been waiting with too much patience for his turn to speak.

Jalacy Jay Hawkins.  You must have heard of him, born in Cleveland to a bastard's chances.

"My father," he'll tell you, "I never seen him.  He split before I got here.  As far as I can tell, he spent his lifetime running around making babies.  My mother, she did about the same thing.  She stuck all her kids in an orphanage home, except she did come around to see us once in a while."

without practicing?  He was playing in Fats Domino's band when he decided to start booking himself into night clubs.  He signed with Columbia in 1954.

I Put A Spell On You was his seventh try at a hit record.  "The song was a sweet ballad when I wrote it," he says.  "Arnold Maxim at that time was head of Columbia Records and he decided that a song with such a title should have something different than other songs.  He bought gin and whiskey, a lot of booze, baby, and got us all drunk in the recording studio.  Ten days later, I had to learn the song."

The record sold a quarter of a million copies before it was banned.  Then it sold another quarter of a million. 'there was a lot of snorting, a lot of groaning and a lot of moaning," he remembers.  "They claimed it was cannibalistic sounds and they banned it from the radio airwaves.  Since then at least 25 different artists have recorded that number, from 1954 until this very moment. I wrote that song, the music and the words, I own it, and it has been keeping me living because of residuals."

Anxiety is something that makes you do exactly what you fear you'll do.  Opera fell further and further from Screamin's reach.  "It was the late, great Alan Freed who said he wanted something different in my act," he remembers.  "It was on a rock and roll show he put me on in Cleveland, Ohio, when tiny had a riot in 1954.  He was known as Moondog then.  He offered me $5,000 to put a coffin in my act, and I did it, for $5,000.

"I always do four or five numbers on the stage. I go on stage straight, do three or four numbers, run off stage and then the entire house is blacked out. They close the curtains. The minute they close the curtains, they wheel on the coffin, in which I was in it.  Then there's blinking purple lights while the curtain opens to a drum roll which sounds like a firing squad.

'that little bit of action right there usually causes the first six, seven, eight or 10 rows of people to get up quickly and get out of the theater.  As a matter of fact, if you're interested to see how effective that is, July 7 I'll be in the Apollo Theater.  That's one of the main theaters in this country that books me because of that coffin.

"Whenever people book me they want me to use my entire act, which includes the coffin, crawling hands, snakes, shrunken heads, a cape and all.  I want to sing.  All I want to do is sing, and they want me back in my voodoo image.  That's what I'm stuck with all my life.

"I did that for 11 years and then I went to Hawaii to settle down because I got sick of living that black image of Vincent Price.  I bought a home and a little beer joint and tried to settle down, but I found out I'm finally used to being Vincent Price.  And if I never get to sing opera, that's a hope that I'll always have, but I'll never make it."  ##