I BELIEVE IN JAZZ 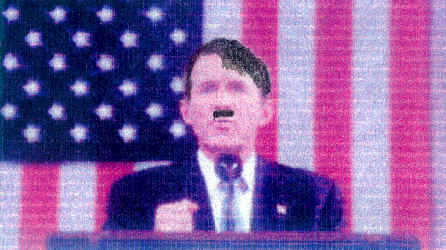 If God exists at all, He exists only as a concept in mortal minds. That's where you'll find the Devil, too. I believe the Devil dwells in each of us. The Devil thrives on Evil's invincibility. Nobody can ever beat the Devil, but each of us must fight an unending struggle to keep the Devil at bay.

How's that for for simplicity? Is that simple enough? To make it simpler still, let's just say that America is now in the control of a collection of individuals, each of whom has lost his or her struggle with the Devil.

Yes, Evil reigns in this land of the formerly free. The Devil is in control of America. These Hitlers planned their wars for world domination long ago.  At least as long ago as the "imperial? presidency of Ronald Reagan. That's when Dick Cheney was Secretary of Defense. Or should we call it Offense? Now even Nelson Mandela wonders if Cheney is really the man in charge here in the U.S. Is George W. Bush merely a figurehead?

Cheney and his chicken hawks have never suffered the horrors of mortal combat. That's because the rich don't fight

wars, they dodge them. It's always the working class kids who lose their limbs or their lives in senseless combat. Now the wealthy once more are about to send young Americans out to die. For what? Cheney and his chicken hawks want to impose a Pax Americana on this planet. What these Hitlerites have in mind is a latter-day version of the Roman Empire. These Hitlerites want the American Eagle to cast a dark shadow over the Earth.

How did such Evil manage to take over America? Because those who think they have dedicated themselves to fighting the Devil have instead dedicated themselves to fighting among themselves. There is no unified opposition to these Hitlerites. There is only a limp dick Democratic Party and a morass of single issue, doctrinaire holier-than-thou-ists under a tattered umbrella they call The Left. While those under the umbrella were busy quarreling over who should hold the umbrella's handle, Evil stole our freedom from us.

Unfortunately, The Left is led by leaders blinded by arrogance, by self-righteousness and by unswerving devotions to their own orthodoxy. Fundamentalism of any brand is unhealthy because fundamentalists refuse to budge. We cannot let our minds be dipped in cement. We cannot let ourselves be chained to our dogmas. We cannot let ourselves be led by our noses down a course prescribed for us by some ancient from a time long gone by. We must remain flexible. We must be ready to budge, shift and compromise.  We who oppose these Hitlerites must make our way as we go along. I believe in Jazz. We must be ready to improvise.  ##