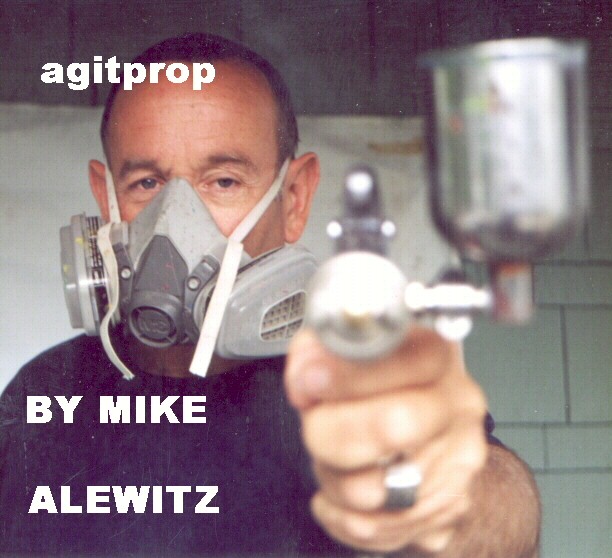 [It's more than a year now and we commemorate 9/11 with this agitprop column of September, 2001.]

The lives of thousands of workers, with all their creative powers, have been ended.  As artists and workers we mourn the loss of our brothers and sisters in New York.  We stand in solidarity with those who will continue to suffer from the loss of family members, jobs and property as a result of these dreadful events.

This terrible crime did not have to happen.

The politicians and press would have us believe that a small group of fanatics in Afghanistan was responsible.  In part that may be true.  But the groundwork for this catastrophe was laid right in Washington, DC.

The hypocrisy of the Bush-Cheney government about the New York events is truly astounding.

The US government dropped atom bombs on innocent civilians in Japan, conducted a murderous decade of bombardment against Vietnam and caused the death of 500,000 children from the blockade of Iraq.  Yet Bush has the temerity to speak of a struggle between good and evil.

The US government helped bring Osama Bin Laden and the Taliban to power, promoted and armed Saddam Hussein for a war against Iran, allied itself with the most reactionary regimes in the mideast and sponsored the ongoing military occupation of Palestine by Israel. Yet Bush has the arrogance to announce that he will root out the criminals.

George Bush wallows in oil money and threatens the people of the Middle-East.  He blames the weak and defenseless - those who have been driven to desperate poverty as they see their region's resources flow to Wall Street, the military and their own wealthy elite.  He utters his bellicose threats---fully prepared to spill the blood of American soldiers. This is from a man whose wealthy father arranged for him to hide in cowardice during Vietnam.

The House and Senate---a bi-partisan congress of millionaires---have written a blank check for an unspecified war with an unspecified target. They will pay for the bombs by plundering Social Security and the further gutting of existing social services. They will give billions of dollars to "bail-out" the airline and insurance industries while they lay off thousands of workers.

As they bang the war drums, the Democratic "friends of labor" are leading the charge to curtail civil liberties.

The media has proven to be totally servile to the warmakers.  The networks parrot official press releases that are infomercials for Bush.  They repeatedly show official film clips that pander to the most backward anti-Arab views.  Their broadcasts have turned human suffering from news into entertainment. They ask no questions and provide no opposing views.

Government and media alike may mourn for those who died in the New York tragedy, but they intend to demonstrate their grief by initiating a war that will bring further death and destruction to workers here and abroad. They are threatening nothing less than a new world war.

The Labor Art & Mural Project has traveled throughout the US and the world to support working-class struggles for social and economic justice.  We have created murals that are projects not of governments but from workers to workers.  Wherever we have gone we have been welcomed warmly by those who understand that there is a difference between the American people and the US government.

In recent years the American labor movement has begun to recognize and reach out to immigrant workers.  We have also made strides in building unity with our fellow workers in Mexico, Central and South America.  These tragic events provide an opportunity to extend similar solidarity to the workers of the Middle-East.  Whenever given the opportunity, these workers have jumped at the chance to fight for their unions and extend the struggle for democratic rights.  We can and must work together for peace.

As the politicians rush to war, we artists have a special responsibility. Those who wish to create a bloodbath are a small minority.  The great majority of the earth's working people has demonstrated that they favor peace and solidarity.  We can use our art to give expression to that vision.

We can be a voice for those who are voiceless. We can use our songs, poems, theater and paint to reveal the truth. Amidst the cries for blood we call upon our fellow artists to use their art as weapons to fight for peace and justice.

No new Vietnams in the Middle-East!

No blood for oil!