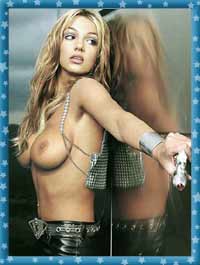 Is that really Britney Spears?

Forbes magazine has proclaimed the 20-year-old beauty to be the world's most powerful celebrity, a title Forbes awards to one of the most famous on the basis of exposure. Obviously, Britney doesn't shrink from exposing herself, but the award is also given on the basis of earnings. The last celebrity to be so honored by Forbes was Tom Cruise.

The epitome of wholesome seductiveness and with a face that is one of the most heart-stopping any man or woman can ever hope to see, Britney is well on her way to becoming the Marilyn Monroe of this incipient century. I know Britney is a singer and I've heard her CDs on the radio and I?ve watched her on the tube and I've caught a bit of her movie, Crossroads, the script of which demanded little if any acting skills from her. Still, Crossroads, lame as it might be,  is a film in which she shines like a radiant midday sun, eclipsing everyone else in the cast and eclipsing even the movie, which obviously serves no other purpose than to show off Britney's good looks and powerful charisma.

Yes, she's a singer, but I really can't remember what Britney sounds like. So far, I'd rather look at her than listen to her sing and therein lies the major reason for her celebrity. She is a spectacular beauty! She really is something to see!

Does she allow us to see too much of her? That is, does she boldly expose too much of her flesh? I myself have seen Britney do a strip-tease on national TV during a music awards show. In the July 2002 issue of InStyle magazine, she is quoted as saying that she has no patience for those who criticize her skin-baring:

I have no claims to Victorianism. Like most men, I like to look at women displaying their private parts. But is that really a picture of Britney showing off her tits? It sure looks like Britney. Yes, Britney is bold, but on the other hand, she claims to be just a girl from a Louisiana parish saving her sex for the man she marries.

"In fact," says InStyle, "not since Brooke Shields has anyone been put under such an intense virginity watch, prompted by Britney's claim to a reporter in 1999 that she would remain chaste until her wedding day. "What's the big deal?? she asks, getting riled up. "I find it interesting that everyone finds it so interesting". . .

Is Britney
REALLY
that virtuous?

"But there are hints that she's really not that innocent. Draped over a handle of her dresser is a pair of yellow pillows attached by a satin ribbon---one says "naughty," the other "nice." On the nightstand sit a copy of the PG love story A Walk to Remember and a bodice-ripper titled Seduction by Design."

Four things appear to be obvious: one, that so desirable-looking a woman as Britney has had to have had the most talented and best endowed of the testosterone crew after her ass; two, she really likes to show off her natural endowments; three, the girl in that bare-breasted picture really has something to show off; and four, how can a girl claiming to be so dedicated to the holy convention of marriage defy convention by showing off her boobs like that?

Britney got her start in showbiz by trying to become a Mousketeer in the Mickey Mouse Club show when she was eight. Although she was too young, a producer on the show gave her an introduction to a New York agent. She subsequently spent three summers at the Professional Performing Arts School and appeared in a number of off-Broadway productions as a child actor, including Ruthless in 1991. She didn't get to be a Mousketeer until she was 11. It was on the show that she met a fellow Mousketeer named Justin Timberlake. There, a friendship blossomed into an on-again, off-again romance that apparently is still on-again, off-again. Justin eventually became a member of "N Sync, a band with which singer Britney toured when she was 16. Obviously, she's a trouper! She's worked hard for her fame.

Marilyn's jeans were a gift from Britney's accountant, who purchased them at auction, according to InStyle, which goes on to reveal that Britney has never worn them. InStyle quotes Britney as saying Marilyn's "hips were very big and her waist very petite. I was thinking about doing something to them so they would fit me---like cutting the waist off---and then I thought I can't mess with her jeans!"

Still one more thing appears to be obvious---that Britney, having entered show business at such a young age, long ago learned that show business is mostly pretense, make-believe and bullshit. I find it hard to believe that this incipient century's equivalent of Marilyn Monroe didn't capitalize on a chance to earn some bucks by posing for that bare-breasted picture years ago when she desperately needed some bucks. In the past 12 months, of course, she earned an estimated $39.2 million, according to Forbes magazine. Another reason why Forbes has proclaimed her the world's most powerful celebrity.

The bare-breasted picture above came to me via the Internet from an anonymous pornographer claiming to have a whole portfolio of woman celebrities showing off their private parts. In fact, that email was soon followed by one from another pornographer containing the following photo: 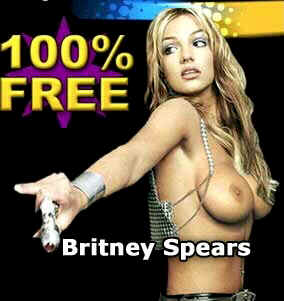 Of course, the pornographer could have employed some darkroom magic, just as the second pornographer reversed the negative. What kind of magic? The same kind used in that old undertaker joke:

The widower, viewing his wife's body before the funeral, told the undertaker:

"My wife never would've worn that red dress. She would have chosen a blue dress just like the one on that other woman in the coffin over there." The undertaker told the widower to step outside a moment and a moment later called him back in. Presto! The Blue dress was on his wife's corpse and the red dress was on the other dead woman.

"How'd you switch dresses so fast?? the widower asked.

"I didn't switch dresses," the undertaker replied. "I switched heads."  ##