HIS FIRST PUBLISHED POEM:
'THE DYING OF CHILDREN'
(Copyright © 1999 Jeffrey H. Weinberg, Literary Executor of the Estate of Ray Bremser) 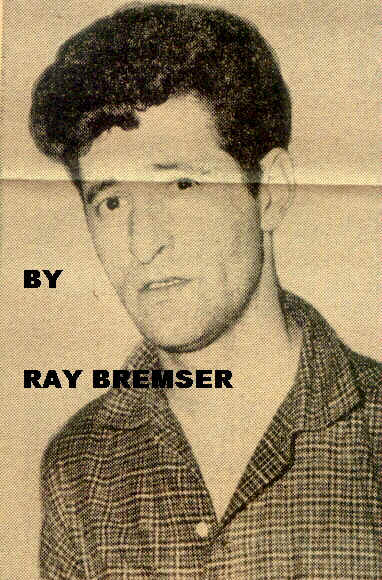 YOUNG RAY BREMSER, already weathered by the storm of fate, at eighteen years of age, serving a stretch of what would be six long years in Bordentown Reformatory, New Jersey, for two counts of armed robbery.  Sentenced to nine to fifteen years but his stay cut short for good behavior.  From 1952 to 1958, when Ray Bremser found his capacity for expression within the laws of man; within the confines of prison life where he obtained his high school diploma and expressed himself through his new-found poetry.  His bebop, scat, jazz measure in time - his jazz swing-along was God-given at birth.  But now his poetry would develop, now in Bordentown.  Ray sent his early poems to Allen Ginsberg and Gregory Corso in Paris and they passed them along to LeRoi Jones at "Yugen." A section of what was to become Ray's first published book, "Poems of Madness," became Ray's first published poem, in the "City Madness" section.  And now, forty years later, I find a poetry broadside with no publisher or date noted; folded in half to make four pages of a poem, I find "The Dying of Children" by Raymond Bremser, Raymond?

I wonder if it's the same Ray Bremser, the real king of the beats, the jazz-beat poet so highly regarded by Bob Dylan?  "Dying of Children?" So unlike the works I know by Ray (without "mond") Bremser ...

Ray, you didn't write this poem, did you?

Here is the surprise of all time, The Children Poem, the original of which I destroyed before I left Bordentown, not quite satisfied with it and many others.

It was printed in the confines of the Reform School's Library, which had one A.B.Dick mimeo machine for making duplicates of forms New Jersey Dept. of Corrections used.  Since I was the Head Librarian during the 1954-1957, I had access to it - I was also elected Editor in the summer of 1956.  The poem was written because my friend Charles Allers, an inmate in for arson, was also an optometrist, and I was quite affected when his four year old daughter died of cancer. My own niece, Cathy, was at that time just over 2 years old; her name was also Cathy.

Some other inmate or person who worked there must have gotten a copy out and had it printed or something?  I have no idea!

A young man of twenty-two, in prison for armed robbery, the child of a mother who worked as an inspector in a condom factory - writes "The Dying of Children" in the summer of 1956.  And the poet discards his work, dissatisfied.  But the work is saved by someone in prison who picks it up and reads it and feels the pain and sorrow of the poet so moved by the death of a child and prints up a few copies with no credit to publisher, just credit to the prison poet, Raymond Bremser.

"The Dying of Children" we now know is Ray Bremser's first published poem.  A fact the poet didn't even know until September 1998, two months before his own death.

I've had my few things past, whose hands have made

My face to bury memories within them,

Quick, as one denies the light by switch.

Or else, remotely thinking, turns to dim them

Finding you, at last beyond your Father,

Following the ceiling, neither living

Nor among the dead: the hand refuses

Is the stilted silence of the room

Death, but infiltration of a treason

Torturing the walls: Your unauthentic

Passage being rendered the Immobile.

Yet, I have my things to disregard you -

Only, I am led along, to prod you.

What if I discover cancer creeping,

Nonconcerned about it really, never

That would shake the marrow loose,

And snap the sinews up the upturned arm

To shock at least the light!  Or else a fuse

Is sure to blow, and force me, finally,

Away from waning things.  The lethal charm

Caught in my hands -

The fault is with your Father.

The whole world of optics, this he couldn't

See.  What is it that has begun

Sequestering - this hunger that we wouldn't

Satisfy - this bloating in the stomach

An awkward room, unvisited - we call

Integrity!  But God, too, is amazed.

And almost like the morning I first saw you,

Goldenly afraid of me (for who

Is this that penetrates your small

Sight of things, exploding in the hall?),

These hands that tremble desperately in fear,

Poised wholly on the sum of each, to clear

The air, and like a lens, exploit you there,

I find I do not know you.  Though the times

On my lap, as an Uncle should

I   suppose, you recited poems

That only children know.  Well, in them, somehow,

You existed truly as a part

Of every verse - and smiled out at me.

Then I knew you!  Then my open hands

Were not so empty, only open.  Now

They pull back, trying to sleeve themselves

Seldom have my things

Been mine for long.  The morning when you first

Were startled by your Mother with an Uncle

Unsuspected, you began to know

We tell some truths you never can believe.

You intensify yourself in she

Who calls me Uncle - even to become

As difficult - for you are life and death

Only be a child in it!

Take the truths you should deny, as true -

And do not grow, nor comprehend the long

Pain, if there is pain.  Accept it though,

As if it were a toy.  Be curious

In dying.  Be the child, and turn again

To fold about your Father - touch his lips,

And he will speak to you, and tell the lies

and change your life to death as soft

As dawn - as soft as wakening from calm

Sleep.  Only stay the child.  It isn't

False to want to live, and you will die

Thus, in the great truth of life's disease:

This: without sin!  To die with ease

Becomes the only real concern with life,

A child or not.  When requiems are sung,

And dirges to the dying - not for death, 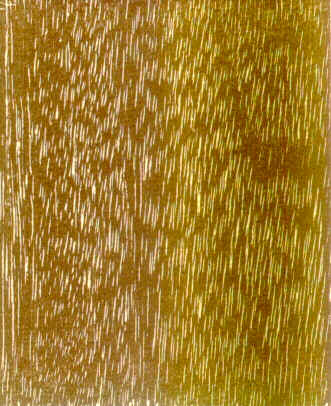 THE DYING OF CHILDREN, by Ray Bremser, was designed and printed in a limited edition of 200 for Water Row Books at EM PRESS in Lawrence, Massachusetts. Pictured above is the frontispiece for the limited edition. The frontispiece is printed from a halftone and a woodcut over hand painted background by Elias Roustom. The text is printed on Zerkall Book cream vellum. The type is Linotype Garamond, set by Ray DesChamps at Classic Composition in Billerica, Massachusetts.  This limited edition is signed by Jeffrey Weinberg, editor and publisher, and by Elias Roustom, artist and printer.  ##