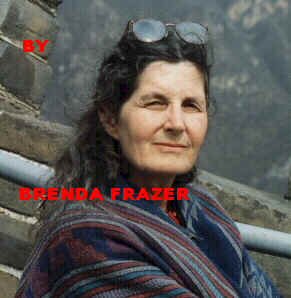 (Copyright " 1997 Brenda Frazer)
The story's already written, many times over. But then, each person has each one's own version to repeat. This one's in a jazz idiom. It starts, around midnight, could have been anywhere but happens to be New York City. No home as such, no money for rent, God provides the security. One-night stands in other people's apartments. A little privacy would be good, a mattress and a radio was enough. No household goods, no sheets. Why bother? The night is for love and it's jazz time when things come alive in the city. Time for Symphony Sid, probably just smoked a joint. "Jumpin? with my boy Sid in the city" " we know the words pretty much. Come right in on the changes, solo riffs, sax or bass.

Do you know the feeling of change? It goes with time, something to do with twelve bar measures. It goes with what the music's saying. Then it says more, and elevates the whole subject to a higher level. Key and tone, rhythm. How do they do it? But the feeling is there. You know it's coming.

Changes, scary as hell. This night we were staying in Howie and Sue's apartment on 8th Street, overlooking the intersection with MacDougal. Ray said to me, "Did you ever think of making it with someone else? Be honest now, I want to know." Keep in mind, folks, that it was hip to be fully sexual. Sexuality was a big issue. One wouldn't want to be too much 'straight up and down like the old folks?, one of Ray's jail expressions. No, never be square. "Why would I want to do that?" I asked, "No, I never thought of anyone else." The little wife, maybe too possessive?

Am I supposed to be attracted to other guys? Or was it just a test? Who was attractive? Be honest now. And then one day, just to try it out I had knocked on the door of a red haired poet friend of ours. No names, but he would know. Why knock on his door? Just for a visit? "A chick wandered up and knocked on my door." What did I think was going to happen and how? He sent me home in an unmistakable manner but gently. Changes are confusing.

I watch Ray's coming and goings with this new thought. Usually it was for money or food. "Gotta have some bread?, bread was more often money. Or maybe he went out to escape from me, the intense yearning, emotional leaning of my need for him. This growing swell of feeling that joined constantly with the music. All there was. Our isolation was a privilege, a pact against the outside world. Perhaps there was something more for him, fame, poetry, but not for me.

Then an incredible high whenever he returned from the street. Overjoyed to see him. And it starts again, the red button of the radio is our light, the dial is set for WOR and we're cross-legged in the dark. Out the window just the blue-black line of the sky above the rooftop shapes. Sid is on again---Miles? eerie whine and then the roar of Trane arriving at the changeover. Maybe Rollins or Stitt too, and Ray looks to me to identify, distinguish the soloist usually by the first bar, sometimes even the first note. The music is everything to us, we go crazy over the sound, turn the volume up till the floor vibrates and sit very close, feeling it.

Ray taught me that, for when he was in jail the music was the connection to the outside, to a world of high and hip. The closeness of our little borrowed room, more like a closet. Maybe it resembles a cell. But if we are locked away it is because we want it so. He talks to make me laugh, tells me about his best friend in jail, Harold. "He's a spade, but not like the ones that play basketball all the time, Harold wrote poetry, incredibly hip."

Harold would say, "Ray, what's the matter with you today man, you're as mean as a mocha." "What's a mocha, Harold." "A mocha, man, is a mythological beast with two heads and no tail, you dig, a head at each end so it can't shit. That's why it's so mean." The marijuana makes it hilarious and I'm the perfect audience for jokes because life had been so serious before. Or, another jailhouse joke, "I went to court and the judge gave me a blivit." "A blivit? What's a blivit?" "Ten pounds of shit in a five pound bag, don't you know?"

My mouth is slightly open to breathe. I am probably over loaded with bronchial nicotine and marijuana alkaloids. There is the feel of him around me, a comfortable adoration. I am grateful for it. It redeems me.

He treats me like a beautiful child, sometimes commenting on my boyish looks. A physical euphoria, not just from the weed, but from having found him, the poet. We delight in our stolen

privileges. And what set us against society? The injustice of things in general was often our passionate talk. Eight weeks married! Here I am in the heart of the Village and the literary life is already second nature to me. It doesn't matter that my sad past came from middle-class nowhere. Now my soul rests in his care, my body in underwear seated on his loose limbed lap.

But the daytime scares me. It's less romantic, like our need for money while the busy world walks around on their lunch hour. Ray explains our survival methods. I listen, the child, impressed with his stories of encounters with friends and of money he's borrowed. He is so cool. "Why were you worried?" he says, "don't do that." But my worry is on different levels, feelings and intellect at odds. Don't think! Ray's right again!

But Jimmy Witherspoon on the phonograph, sings Careless Love and it's all beyond my comprehension. Like music when the changes come up, inevitable, you feel the approach. He'd been pretty open with me about the women in his life, after all he was a poet and women adored a view of the soul. I even knew about the boy Stewart in jail. I'd been open with him too, my meaningless high school and college sexual pastimes. But now it's daylight and we're not talking. He gets up, leaving me.

It is obvious to me from before the first moment, how did I know? Maybe you have to be joined at the hip to understand. One minute playfulness and then that preoccupation, is it money again? He gets dressed and goes out. "I'll be back in a little while." Noncommittal. The windows onto the street are Shakespearean, the way they fold out, and I am a lover dismayed. His figure is unmistakable, his walk, arms hanging loose from the shoulder heavy to the hands in fists. I watch him stroll west on 8th Street. Did he feel me watching? At the corner he speeds up and walks determinedly.

With a cold heart I look around for his address book, gone. I quickly follow him into the street where bright sun, traffic and crowds bother my eyes. I'm already at 6th Avenue before I realize what I'm doing, intuition has taken over. Then into the labyrinth of the West Side where the streets go random, I only managed by keeping him in sight and arrive at the same building just after he'd gone up. Maybe I knew it from his address book, the coded markings that made me jealous. Knew that Marlene lived on the West Side.

Out of breath already on the second floor, but it's fear. I knock and she opens the door. Simple as that. I don't say anything but see through her small body with very long hair just loosed, see to him there looking right at me with his sock feet already up on the coffee table. Not a flinch from him as my heart beats strong. He tells me to go home.

No home for me on the streets of NY. I wasn't used to people calling "Beatnik? after me. Couldn't find the strength to be defiant. What was I doing here? No father, mother, friend, no place to go nor money to get there. Who needs a home anyway? I just want to cry. Grief and anger alternate, I?m too naive to be vindictive.

I wander around the village trying not to notice the happy voices in the park , occasional smells of dinner cooking. Finally walk the few blocks to 8th Street, no more strength for any emotion. And find him already there awaiting my confusion.

"She sent a note through Howie yesterday that she was thinking of suicide," he said. I was struck dumb, this was even harder than betrayal. It was his spirituality, it was the Jesus figure that his skinny body and ravaged face so resembled. I had been betrayed by the very essence of him that I loved, compassion, understanding, the poet. But his feet on the coffee table, so intimate! "I had to do it," he explained. Meanwhile Jimmy Witherspoon's singing again, "Love, oh love, oh love divine. Love, oh love how can it be?"  ##