DEAD BUT NOT GONE 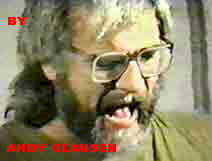 [The following first appeared in HUNGER NO. 5 1999 and appears here with the permission of the author]

On November 3, 1998, the tall slender haggard abused & impossibly resilient body of once blade-handsome legendary jazz beat word magician Ray Bremser left us.  His last words were reported as a cranky Hobokenesian awakening from semi coma, "I want to die!" His last request, "John Coltrane." This is not an obit or attempted encapsulation of Ray's wild & terrible life.  This is an old buddy's reportings & musings at his funky & appropriate shall we say funeral.

I knew Ray wasn't healthy.  When I saw him in Allen Ginsberg's old apt. kitchen on 12th street in '95, I couldn't help blurt out, "Ray you're too skinny!" Heck, when I met him in 1980 he already looked 20 years older than his chronology.  He would get no argument when he would gleefully remind us, "I'm 49 and look 69." In 1995 at the NYU Kerouac Conference, where we were roommates for 3 days, Ray would have to rest after a half block of walking. (Interesting aside: On the Internet Ray [who carried the drunk Kerouac home and was tremendously influenced by him] and myself are cited as not having the credentials to discuss Kerouac.)

But what a mind.  An American Khlebnikov, who wrote like Elvin Jones & Trane played.  I don't think I've ever had so much fun & warm wisdom as when Ray & I would be around a bottle & can & overflowing table, or he riding shotgun like when I drove 31 hrs. straight from Cherry Valley NY to Boulder Colorado for the 1982 Kerouac Conference, we jabbered joked & juked the whole way in the van with my family, 9 of us in all, & the young poets Dan Shot & Eliot Katz on the way back.  And Ray won the best poet award.

At times he, came to readings too drunk.  One time at St. Marks he passed out before his reading.  But the man I saw perform his poetry in Boulder '82, New Paltz in '83 (Unison Learning Center), Woodstock with Allen G. and me '83, with Herbert Huncke at St. Marks in '84, at Town Hall in '95, he was terrific.  At his last performance Cherry Valley '98, where he & long-time buddy Mikhail Horowitz delivered from The Conquerors (Water Row Press '98), I saw in Ray's eye laughter that he was having a great time.  The crowd adored him.  He was the man.  When we dropped him off back in Utica he immediately took a seat on the stoop with the other tenants.  I said, "I'll see you, Ray" and he just turned his head.  I repeated, "I'll see you, Ray." And with his head turned, he mumbled something.  Ray had never gone back for the biopsy results.  He knew my promise to meet again would never be.

"Ray was a good brother" is what friend-through-the-years Janine Pommy Vega said and Ray was more a brother than a priest.  When Ray & I went to the dogtrack in Denver his only bet was

Did someone
mix LSD
in with Ray's ashes?

on a black greyhound called Brother Ray who returned $6.20 on his two-dollar investment.

Ray loved literature but wanted little truck with the literary game.  Ego was not what he was about.  He loved some poets but he also loved folk with menial jobs and no jobs, yardbirds, jazz & country blues & opera.

About 50 people from all walks runs & crawls made their way on Nov. 14 to the Committee on Poetry Farm (now run by the Ginsberg Trust) to honor Ray's request his ashes be spread there, his one-time home.  The man who cared for Ray in his last days and through the years, artist Al Duffy, who started out as Ray's gofer 18 years ago and became his "adopted" son, confidante & illustrator, brought the box of ashes and everybody got a handful & where I once grew two acre-sized gardens & Ray & Allen & Peter & Bonnie &Tommy & hundreds, nay thousands of others had once lived & loved & battled extreme winters, we threw our pieces of Ray in the air collectively.

Near the bumpy chamomile-lined road a temporary shrine & display was set up by Duffy, a large photo of Ray looking proud in an old army shirt like a weathered & wizened colonel who'd known Kipling & Borneo Nepal Patagonia, who'd tramped with Burton & Spekes looking for the source of the Nile!  His last quart of Milwaukee's best more than half gone, his 14-inch atavistic black & white tube, his last pack of ciggie-boos.

Janine & I tasted Ray; he was salty & gritty.  The celebrants formed a circle & Charlie Plymell began with homemade drum, then guitar accompaniment, a bluesy heartfelt tribute: "Rays eyes some'times intense screaming 'I want to die!' / Not philosophically / but in the growl for prison guards /shaking his bones against the iron bars of New Jersey..." Janine Vega sang out a supersweet elegy for the lost brother: "And it's you, sblibbity-bopping word machinator, / spilling 'em out like marbles / from your hollow mouth sound, your thorax axe..." Karl Waldman talked about how in spite of it all (Ray experienced a family life full of heartbreak & jail & being an outlaw---see Dictionary of Literary Biography Volume 16, 1983 for story of Ray by Horowitz & Moodnik; also For The Love Of Ray by Bonnie Bremser), Ray & Bonnie's daughter Georgia was doing well & was now on vacation in Australia.  Karl stated Ray was a good father. I think even Ray would admit that's stretching it.

There was a surprising amount of testimony concerning his compassion, thoughtfulness & generosity.  He gave the daughter of his long-time friend Anita 300 dollars so she & her new baby wouldn't be evicted & that must have been close to Ray's entire monthly nut.  He talked a drunken father out of ruining a party & he helped depressed artists with his goof & put-down-proof encouragement.

In '97 1 asked Allen Ginsberg about his students, which ones were exceptional.  I asked about Sapphire & he said, "Yes, she listened & picked up, has a lot of talent & anyway she dug Ray Bremser which is an easy way to my heart." In the Obscure Genius edition of Friction, Allen as guest editor pointed out Ray as one of the most interesting & musically magnificent obscure geniuses.

Will Ray remain obscure?  Not to the 50 people at his funeral at the Committee & the good?natured wake at Pam & Charlie Plymell's.  Not to the people who heard him when he was on.  Nor those who've dug Blowing Mouth, Angel, Poems of Madness, The Conquerors, etc.  And now that his iconoclastic homeboy voice cannot be heard & he won't have to sleep on their couches & make passes at their daughters & drink up the fridge & cabinet & fill ashtrays, the academy & the stale avant-garde may give due to one of the greatest innovators & crazy wisdom rhythm creators of all time.

Then it was my turn & they asked me to read the last 3 pages of his classic Born Again, also known as Jazz Suiti (sweetie).  "Maybe I'll come back / as a yak / with a bad back & a sprained sacroiliac / pissed off / on Annapurna! / ... maybe nobody wants / to see me come back at all! / ... only I'm / incorrigible / & I'll come back, born again .. / I always have, / come back..." I wanted to say something, express my love & I said how I never felt Ray meant any way anything bad towards me.  He was a buddha to me & easy to love & then his ashes came on, someone had put LSD or mushrooms in the ashes, because I began to peak.  It was beyond poetry & literary significance & the fucking beat generation "dropping like flies." It was carnal; he was a great human being & I always thought someday I'd have money & literary influence & I'd get Ray the recognition his work deserves & I'll make his life easier & we'll read together in NYC & Frisco & London & Prague & Kathmandu to throngs of word- & spirit-hungry hipster youth ... but Ray had what he wanted, some quiet, some tunes, beer, butts & old TV to sing opera with, the 4th Tenor!  He knew the songs, the arias, & he could scat & eulogize at the same time!  I said, "Some people say Ray gave up on life..." & I froze, the ashes had me, I couldn't speak & I didn't want to sob & after a couple minutes or more of silence, Anita said, 'Ray didn't give up on life," & there were testimonies that indeed Ray had always had life.  He may be dead but he's not gone.  Long live Ray Bremser!  ##