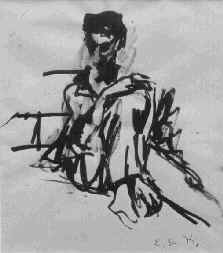 ELAINE DE KOONING'S SKETCH OF RAY BREMSER WHEN HE WAS 25

[I am consumed by remorse that I never got to see Ray Bremser again. He got out on parole, married Bonnie, got busted for violating parole, got thrown in jail a third time for some stupid reason or other and I never saw him again. I feel bereaved and I'm in terrible pain about it!

Starting in 1959, when I was hanging out with the young Beat poets, I developed a special fondness for Ray and felt myself included in a sort of fellowship with him and Amiri Baraka, then known as LeRoi Jones. My fellowship with Amiri not only has endured these many years but has grown into what I feel is more of a brotherliness. As for Ray, he just plain disappeared!  No matter. I took it for granted our paths would cross again. After Ray disappeared from the scene, I got very busy. And then my wife died and then I died, too. Or at least I may as well have. I was assassinated. I became lost in drugs and insanity.

Even in my derangement, I hung close to the Beat scene. In the back of my mind, I kept looking for Ray to reappear. But somehow, he never did. Then I began to get too busy to be off my nut and I stopped being crazy. Writing about many topics other than the Beats, I was still taking it for granted that Ray and I?d come across each other again. Then I got word he'd been making the scene in Upstate New York, hanging out on Allen Ginsberg's farm in Cherry Valley. Allen's farm gave me a lot of sweet, sour and smelly memories. My kids spent their summer there when my wife was dying. What I remembered most about Allen's farm was it didn't have running water. The only place to take a dump was in the outhouse. You sat on a seat with a hole in the middle and you shat into a pail underneath the hole. One day, Allen told me it was my turn to empty the pail. Fat chance! He ended up having to do it himself. I can still see him walking with his hands in work gloves as he carried the pail to empty it I forget where. Besides, Cherry Valley is a long, long, long, long bus ride away.

In the beginning it was Ray and then it was Ray and Bonnie. He called her "Angel." I soon began never to see the one without the other. When Ray disappeared from the scene, so did Bonnie. I never knew what happened to them after they left New York and it was with both great delight and sadness that I received and read Bonnie's reminiscences, Poets and Oddfellows, a spellbinding manuscript I feel honored, proud and privileged to be able to offer in nine parts beginning on PAGE ONE of SECTION FIVE of COLUMN SEVENTY-FOUR. Bonnie's writing, like Ray's poetry, cuts to the bone. You experience her emotions as she takes you through the twists and turns of her saga. Just as Ray's poems take you on fascinating roller-coaster mind trips of his life in and out of prison. Just the facts, Ma?am!

With a Jersey City accent and a prison pallor, Ray's poetry mesmerizes you. Yeah, I know, I?m a sucker for a good storyteller. But to me, Ray's poetry is equal in greatness to that of the Beat Generation's other great jailhouse poet, the late Gregory Corso, an incorrigible pain in the ass when he was alive but now a rival of Allen Ginsberg in poetry's hall of fame. Why? Because Allen was as much a politician as a poet. Certainly Ray and Gregory will serenade poetry for as long as there is a future. But if Gregory shit on the world, it seems the other way around in Ray's case. You have to give up a lot to achieve immortality. Yes, Ray did manage to salvage a bit of joy from his all-too-short lifetime. But Ray's story was tragic. I feel bereaved and so should the world.

This issue of THE BLACKLISTED JOURNALIST, dedicated to memorializing Ray, will tell you much more about him.

In his all-too-short lifetime, Ray Bremser failed to attract the wide attention due him, the universal acclaim he deserved, the world's acknowledgment of his true gigantic literary stature, the full recognition that he was destined for immortality. Poor Ray! All the rewards his brilliance brought him during his all-too-short lifetime amounted to little more than a kick in the ass.

Back in 1959, I lumped him together with Gregory Corso in my 12-part New York Post series about the Beats. I lumped the two as the chief jailhouse poets of the Beat Generation. But the ever-contentious Gregory objected to sharing my article with Ray.

Gregory's objections not withstanding, the connection was obvious to me at the time, and that's why the Beat Generation's two most outstanding jailhouse poets shared Article IX of my Post series. Some 40 years later THE BLACKLISTED JOURNALIST not only presents this column honoring the memory of Ray alone but also plans a memorial column in honor of Gregory. In other words, both Ray and Gregory have grown too large to fit into one chapter of THE BEAT PAPERS OF AL ARONOWITZ.  And so this installment will feature only what I wrote about Ray in Article IX more than 40 years ago. What I wrote about Gregory in Article IX will appear in a future chapter dedicated to honoring Gregory.

The picture above is of an ink sketch on paper of a 25-year-old Ray, newly paroled from New Jersey's Bordentown Reformatory, as he sat on the bed of the artist who drew the sketch. The artist was Elaine de Kooning, who went on to make quite a name for herself---even if she never got to be as famous as her old man, Willem de Kooning.

"When I got out of prison, she learned I was fresh meat, a virgin who'd never been laid," Ray told me. "And so she pounced on me. After all, I'd been locked up before I ever had a chance to score a piece."

"A virgin who'd never been laid by a woman, that is," Brenda Frazer, Ray's beloved Bonnie, commented with a laugh many years later.

The sketch was part of Ray's reward for staying with Elaine after he got out of slam. He sold it to me for $50 after he married Bonnie and got strapped for cash. The drawing now hangs in the house of my photographer son Myles. I also have a sketch that Bonnie later sold me for $50: arcane and mysterious figures she drew on a magazine page advertisement that said, "How to make a seven-day vacation exactly that."

It was poet activist Allen Ginsberg who'd launched the campaign to help get Ray out of prison. He quickly enlisted me to get Norman Mailer to put his formidable shoulder to the wheel. That was when Norman and I knew each other. Actually, Norman proved very effective. It was after Norman helped Ray get paroled that Ray hit on me to get him together with Norman.

Norman lived in Brooklyn Heights and it was his idea that we all go to hear a set or two by our mutually acclaimed jazz idol of the moment, John Coltrane, who was playing at the Coronet Club in the dark heart of Brooklyn's Bed-Stuy ghetto. Allen and Gregory were pasted together in those days and then there was Ray and me. And then Norman piles into the taxi with his 19-year-old young squeeze of the moment, who wastes no time in putting me into her crosshairs. When she pops an amy under my nose, she tells me with a mischievous grin:

"I did that to Tom Wolfe at the Beaux Arts Ball. He said, "When do I come down???

Brian Jones had already introduced me to the high of amyl nitrate but I felt delighted to be flirted with by Norman's strangely sexy girlfriend of the moment. Years later, she would turn out to be the woman who succeeded in nailing the lid on my coffin after the notoriously corrupt New York Post executive editor, Paul Sann, assassinated me. But Paul Sann and Norman's squeeze of that moment are the subjects of two other stories I'll one day try to tell. This one's about Ray.]

He shoved it against the gas station attendant, pushed him to the wall and then emptied the cash register.  Fifty-five dollars.  He put the money in his pocket.

"Since I was 13, I had a record of hooky so long," he says, motioning toward infinity.  After achieving the age of 16 with much more facility than he achieved the eighth grade, Ray promptly quit school to go out and look for unemployment.  He wasn't entirely successful.

"I worked for a while as a floor guard and a skate room repairman at a roller rink," he remembers.  "But I just didn't want to work.  So my father put the pressure on me.  My father, he's a night watchman.  He don't like me and I don't like him since time began.  When I was four, he took me to the zoo, but I started crying in Penn Station, so he took me home.  We never got along together after that.

"Well, I had to bring some money home.  I didn't think about it. It was spontaneous.  I borrowed a gun from a buddy and I went to a gas station six blocks from home.

"So the cops finally grabbed me and I signed all sorts of things.  I pleaded non vult because I was promised leniency---you know, I was 19 and a first offender and all that---so, the leniency turned out to be nine to 15 years."

In his five years and eight months at the New Jersey State Reformatory at Bordentown, Ray Bremser finished grammar school, went on through high school and then took journalism courses by mail.  He also became head librarian.

"Even when I was a kid, I always had an alert mind," he says.  "I always used to read a lot, although I never dug poetry.  Then, in prison, I seemed to fall into it.  It was the desire to retain one's own sanity which prompted me to submerge myself In writing.  I started writing almost immediately.

In prison, Bremser wrote endless poetry, some of which has already been published, and he also wrote seven novels, one of which may soon be published, too.  But most important to him, perhaps, was a letter he wrote to Allen Ginsberg.  He had read about the banning of Ginsberg's Howl by San Francisco police and he mailed Ginsberg a note of encouragement.  Soon it was Ginsberg who was encouraging him.  Bremser sent Ginsberg some manuscripts and Ginsberg sent them to publishers.  Soon, also, Bremser had another correspondent.  Gregory Corso.

Ray Bremser was paroled from Bordentown last November 20, the day after his father left home.

"Now I have a lot of invitations to read my poetry---Howard, Princeton, Vassar," he says.  "And I have a part-time job.  I'm not doing so bad for an ex-con.  I haven't committed any crime since I'm out, but people think I have, so I let them.  If people found out otherwise they'd be disappointed.

HOW TO MAKE A SEVEN-DAY VACATION EXACTLY THAT: 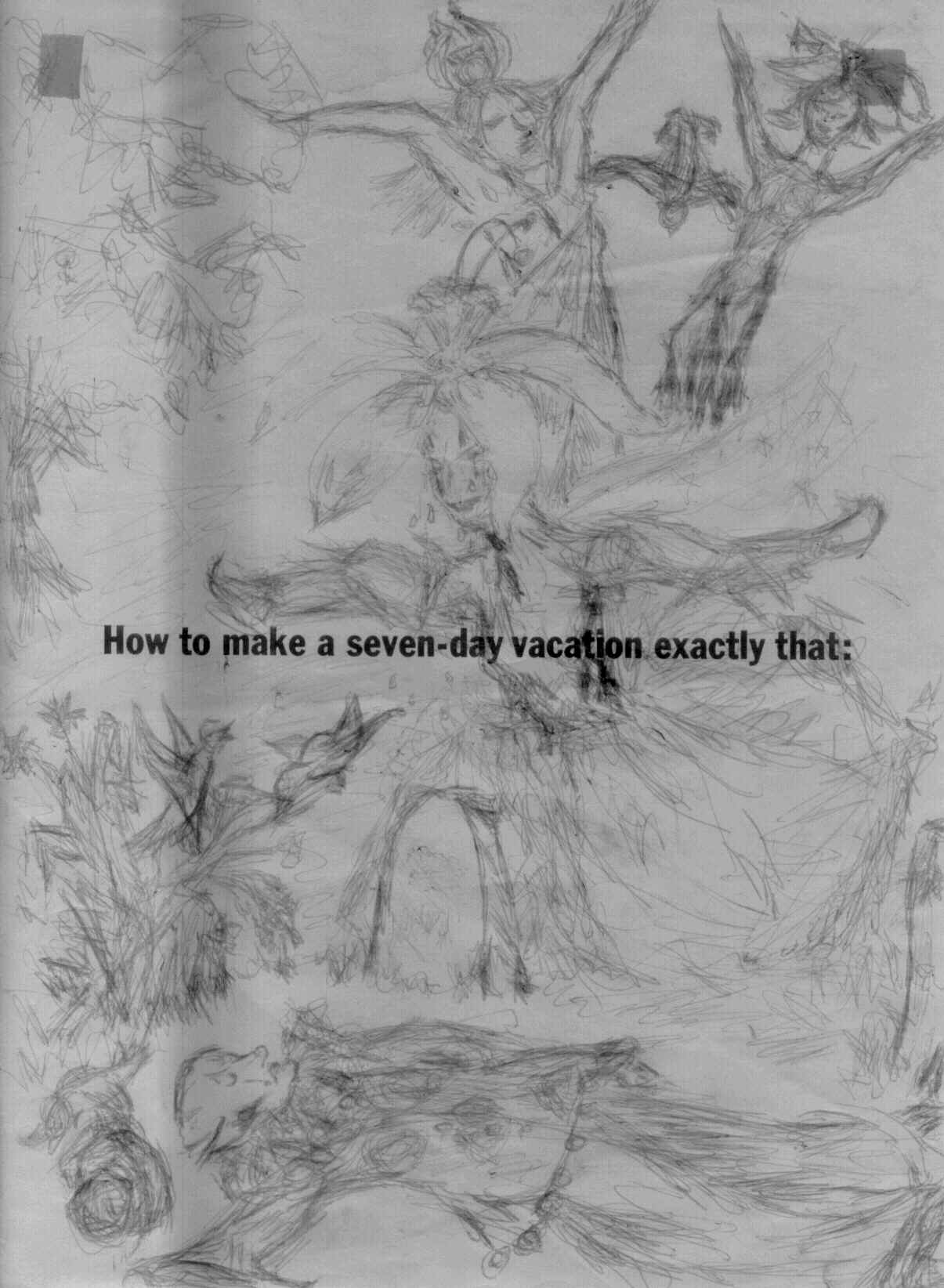 I also have a sketch that Bonnie later sold me for $50: arcane and mysterious figures she drew on a magazine page advertisement that said, "How to make a seven-day vacation exactly that."