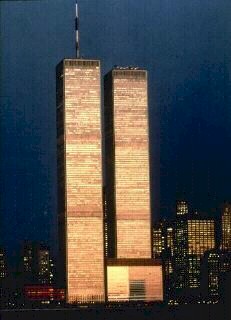 Are the CIA and the FBI bosses falling on their swords to protect our unelected President?

The international press has already labeled George W. Bush a simpleton and---despite a stern Bushie demand for patriotism that even made CBS's respected anchor man, Dan Rather, admit he shrank from asking tough questions---other American journalists have begun to use other synonyms for simpleton. [See Molly Ivans? BUT HE's OUR WACKO.]

Now comes news of specific tipoffs to our costly intelligence agencies that should have warned the brave leader of our country exactly what Osama bin Laden's maniacs had in mind. But the bosses at the FBI and the CIA have quickly stepped up to the plate to deny that George W. Bush's ears were ever sullied with such inside dirt.

"It was all our fault," the FBI and the CIA tell us.

WHAT DID BUSH KNOW AND WHEN DID HE KNOW IT?

'the way I see it," comments one D.C. insider, "if there is any kind of evidence that is made public (no matter how small) that Bush had prior knowledge of the attacks and that thousands may perish, our country would face the biggest political scandal in its small history. This would dwarf both the Watergate and the Lewinski affair. Lets face it, people would be horrified. And Bush would not only lose his presidency, but he might even face criminal charges. I have a feeling we have an open can of worms here."

When Rep. Cynthia McKinney (D-Ga.) called for an investigation and asked a similar question---?What did this administration know and when did it know it??---the Bushies responded with a verbal assassination. When Democratic Senate leader Tom Daschle criticized Bush, Vice President Dick Cheney accused Daschle of being unpatriotic. Cheney, of course, is the man who lied to the Senate about selling crucial equipment to Saddam Hussein when Cheney was president of the Halliburton drilling supply company. But then our vice president has a habit of talking out the side of his mouth. Or haven't you noticed?

Presidents have lied to us before. For example, only recently has it been learned that Lyndon Johnson lied to us. His lie was that an American Navy ship was attacked in the Gulf of Tonkin and that lie led to America's involvement in the Vietnam War, an unwinnable conflict that cost the lives of some 58,000 of our young men. Johnson needed a provocation to get us into that war. Did Bush lie to us because he needed a provocation to invade Afghanistan in Big Oil's behalf?

Bush wraps himself up in red, white and blue patriotism as if he were a gift under the White House Christmas tree on July Fourth. But what's becoming increasingly clear is that those patriotic wrappings contain a package as empty as his campaign promises. In other words, this nation's unelected President does not love America so much as he loves Big Oil, Big Business and Big profits. It is to them, not to our country, that George W. Bush dedicates his patriotism. After all, it was Big Oil, Big Business and Big profits that were largely responsible for installing him in the White House.

Will we ever know the truth? Not if the Bushies can help it. They have succeeded in shrouding their administration within an impenetrable cloak of wartime secrecy. No, we can't know the names of the Enron people who helped the vice president determine the administration's energy plan because it's none of our goddamn business. No, we can't let you know what dirty tricks Attorney General Ashcroft is playing on us for the same reason. Suddenly, everything has become none of our goddamn business.

Well, everyone knows that secrets are the tools of tyranny and we begin to wonder if this war on terror was staged just so we could be tyrannized. Or should we shrink from asking tough question as Dan Rather did so as not to be

Is it unpatriotic
of me to ask
these questions?

accused of being unpatriotic? For example, I know an air force vet who can't understand why fighter jets weren't scrambled to head off the hijacked airliners long before they hit the World Trade Center or the Pentaqon. He insists there was sufficient time and advance radar warning.

And why do the Bushies continue to resist demands for the establishment of a commission of inquiry to investigate the September 11 attack? Recent revelations that our expensive intelligence agencies had more than enough evidence to know what the bin Laden gang was up to leave us wondering.

Why had American intelligence failed so miserably when foreign intelligence agencies seemed to have so much better knowledge? And why was the American military so well prepared for our eventual invasion of Afghanistan? There are too many unanswered questions. Doesn't America deserve an explanation?

We have an email from John Horne (johnehorne@hotmail.com), who complains of evasiveness in the official White House transcript of National Security Advisor Condaleezza Rice's address to the media in defense of her boss? lack of action following reports that the FBI ignored specific warnings before the WTC attack. Twenty-one paragraphs from the bottom, Horne writes, the official transcript states:

"Q Dr. Rice, are you aware of the reports at the time that -- was in Washington on September 11th, and on September  $100,000 was wired to Pakistan to this group here in this area? While he was here meeting with you or anybody in the administration??

In his email Horne insists, 'the two dashes are normally included in transcripts to indicate a pause, but Dr Rice clearly understands the question that is being asked, hence her reply:

"?DR. RICE: I have not seen that report, and he was certainly not meeting with me."?

The ISI is the Pakistani Intelligence Service, then headed by Lt. General Mahmud Ahmad. In SECTION TWO of COLUMN SEVENTY you'll find the following paragraphs:

The CIA continues to maintain an unhealthy alliance with the ISI, the organization that groomed bin Laden and the Taliban. Last September, the head of the ISI, General Mahmud Ahmed, was fired by Pakistani President Pervez Musharraf for his pro-Taliban leanings and reportedly after the U.S. government presented Musharraf with disturbing intelligence linking the general to the terrorist hijackers.

General Ahmed was in Washington, DC on the morning of September 11 meeting with CIA and State Department officials as the hijacked planes slammed into the World Trade Center and Pentagon. Later, both the Northern Alliance spokesman in Washington, Haron Amin, and Indian intelligence, in an apparent leak to The Times of India, confirmed that General Ahmed ordered a Pakistani-born British citizen and known terrorist named Ahmed Umar Sheik [now under arrest as one of the kidnappers responsible for the murder of Wall Street Journal correspondent Daniel Pearl] to wire $100,000 from Pakistan to the U.S. bank account of Mohammed Atta, the lead hijacker.

SECTION TWO of COLUMN SEVENTY tells a story that implies George W. Bush and his CIA did indeed know of the impending Arab attack but were willing to sacrifice the WTC and its occupants because Big Oil needed a provocation for America to invade Afghanistan. Why? So Big Oil could build its Trans-Afghan pipeline.

On September 11, according to newspaper reports, Israeli Prime Minister Ariel Sharon was supposed to fly to New York, but Israeli Intelligence told him not to go. These reports opened the floodgates for the notoriously hyperbolic Arab propaganda machine, which reported that Sharon told 6,000 Jews not to go to work at the WTC that day---a report obviously as preposterous as Ibn Saud telling 6000 Moslems the same. However, the notoriously anti-Israel Arab "Street" and anti-Semites everywhere continue to cling to this fabrication as truthful fact. See Thomas L. Friedman's column.

Anyway, if Israeli Intelligence was onto something, the callous killer cowboys at the core of America's CIA must have known something, too.

And what did Dr. Rice know? Big Oil has rewarded her allegiance by naming a tanker after her, the SS Condoleezza Rice.

In its original report, The Times of India starts out:

Top sources confirmed here on Tuesday, that the general lost his job because of the "evidence" India produced to show his links to one of the suicide bombers that wrecked the World Trade Centre. The US authorities sought his removal after confirming the fact that $100,000 were wired to WTC hijacker Mohammed Atta from Pakistan by Ahmad Umar Sheikh [Now being held as one of the murders of Wall Street Journal correspondent Daniel Pearl at the instance of General Mahmud.