A MESSAGE FROM ALLAH? 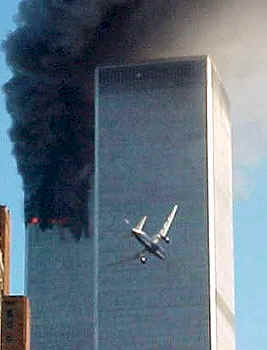 TO ALL MY FAITHFUL: STOP SENDING MARTYRS! PARADISE IS  RUNNING OUT OF VIRGINS FOR THEM!

Although I have been a left-wing sympathizer all my life, I'm beginning to find the orthodoxy of the extreme left as distasteful as that of the far right,  Well, maybe not quite.  But I find all extremes too far out for anybody's good. The trouble is that on both the right and the left, the extremists want to impose their orthodoxy on everyone else.

For instance, here's an email exchange I had with Darlene Fife, whose New Orleans anti-Viet War heroics were partly described under her byline in  in SECTION FIVE of COLUMN FORTY-SIX and in SECTION SIX of COLUMN FORTY-NINE of THE BLACKLISTED JOURNALIST.

I just wanted to say that I was shocked by the bigotry of your response which John Bennett sent out.( I am on his mailing list.) I expected better of you. I don't agree with Goff that the WTC bombings were a project of the govt (but

The above is what I consider 'bigotry.'  As Noam Chomsky says in an interview - terror is not new. We (the US govt) have been practicing it for years. Only the place has changed. Which does not excuse the hijackers. If you're interested in the Chomsky interview, which actually John Bennett may have already sent out, it is at www.B92.net.  I think I got it right. It is Belgrade radio.

Regretfully, I must confess that I am a bigot. I'm bigoted against assholes. One reason I'm regretful is that not a day goes by that I can't look back and see when I was an asshole myself. But I'm afraid it's Darlene who's riding a high horse---the high horse of the holier-than-thou attitude of the fundamentalist far left. It stunned me to learn that a courageous and independent woman like Darlene had surrendered her consciousness to the required knee-jerks of far left orthodoxy.

Yes, I've grown bigoted against the Arabs, who are at the forefront of the Islamist attempt to force the world back to medievalism. Deformed mullahs---deformed either physically or mentally---seem to have hijacked their mosques and their religion by preaching the kind of theocratic fascism that would put the mullahs in charge. I certainly don't see any mullahs in a hurry to take the martyrdom express to Paradise, a fairy tale they use to enlist suicide bombers. They persuade dumb kids with raging hormones that the quickest and easiest way to get laid is to blow oneself up in the middle of a crowd of infidels.

Now I know that not all Arabs are extremists. But the moderates among the Arabs obviously have been less than effective in counteracting the tide of militancy surging through the Arab world---the tidal wave of  hate for the West and for Western Culture.  The Arabs certainly have succeeded in persuading me that they're against modernity. An eloquent article on Moslem medievalism versus Moslem modernity can be found on PAGE NINE of SECTION FOURTEEN of COLUMN SIXTY-SEVEN. It was written by author Salman Rushdie, himself born a  Muslim, on whose life the Ayatollah Komeini, a typical Islamist dictator, ordered a holy hit.

I'm not the only one who's been turned off by the Arabs. I'm told that in Moslem Afghanistan, where a "foreign legion" of Al Qaeda fighters shored up the Taliban forces, the people pronounce the word "Arab" as if they're spitting. The Afghanis found the Arabs to be so offensive that the word appears to have  become a derogatory term. To an asshole like me, the biggest assholes in the world are the Arabs.

The Arabs are assholes to let Osama bin Laden brand them as cold-hearted, barbaric and bloodthirsty people. But most of all, the Arabs are assholes to permit the growing fervor among them for jihad. Arabs are even naming their sons Jihad. Jihad means Holy war. The Arabs are permitting extremists among them to try to provoke a holy war against the West. A holy war in all the many places in the world where terrorists are murdering people for no other reason than to provoke such a holy war. Places such as the Middle East. And such as on the India-Pakistan border, where the jihad to end all jihads threatens to  erupt.

In other words, the Arabs are assholes to permit the assholes among them to risk igniting a thermonuclear holocaust.

CLICK HERE TO GET TO INDEX OF COLUMN SIXTY-EIGHT