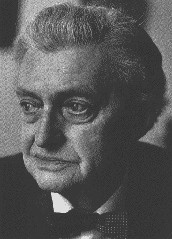 Sorry to be the bringer of bad news...

The poet David Gascoyne died on Sunday 25 November on the Isle of Wight, aged 85.

David Gascoyne was born in 1916 in Harrow, Middlesex, and educated at Salisbury Cathedral School and the Regent Street Polytechnic, London. His first collection of poetry, Roman Balcony and Other Poems was published when he was sixteen, and in 1933 Cobden-Sanderson brought out his novel, Opening Day. Both books are remarkable achievements for an adolescent, and they were followed by the equally striking poetry collections, Man's Life Is This Meat (1936) and Hoelderlin's Madness (1938), which established his reputation as one of the most original voices of the 1930s. Gascoyne was among the earliest champions of Surrealism: in 1935 his A Short Survey of Surrealism was published, and in the next year he was one of the organisers of the London International Surrealist Exhibition. From this period, and during his time living in France in 1937-39, date his friendships with Dali, Max Ernst, Andre Breton, Paul Eluard and Pierre Jean Jouve. As well as becoming internationally celebrated as a poet---especially after publication of his Poems 1937-1942, with its Graham Sutherland images---Gascoyne became highly regarded as a translator, notably of Hoelderlin and of the leading French Surrealists.

After the war, Gascoyne again lived in France (1947-48 and 1953-64), partly in Paris and partly in Provence. He consolidated his reputation with A Vagrant and Other Poems (1950), and with Night Thoughts (1956), commissioned by Douglas Cleverdon for BBC Radio. His Collected Poems, published by Oxford University Press in 1965, were reprinted six times. In 1994 Enitharmon published a substantial volume of Selected Poems.

David Gascoyne lived with his wife, Judy, at Northwood on the Isle of Wight. In 1996 he was made a Chevalier dans l'Ordre des Arts et Lettres by the French Ministry of Culture for his lifelong services to French Literature.

What is your want, perpetual invalid
Whose fist is always beating on my breast's
Bone wall, incurable dictator of my house
And breaker of its peace? What is your will,
Obscure uneasy sprite : where must I run,
What must I seize, to win
A brief respite from your repining cries?

Is it a star, the passionate short spark
Produced by friction with another's flesh
You ache more darkly after. Is it power :
To snap restriction's leash, to leap
Like bloodhounds on the enemy? There is no grip
Can crush the fate you fight. Or is it to escape
Into the dream-perspectives maps and speed create?

You never listen, disillusion's dumb
To your unheeding ear. But see my hand,
The only army to enforce your claim
Upon life's hostile land : five pale, effete
Aesthetic-looking fingers, whose chief feat
Is to trace lines like these across a page :
What small relief can they bring to your siege!

When the light falls on winter evenings
And the river makes no sound in its passing
Behind the house, is silent but for its cold
Flowing, its reeds frozen stiffer than glass
How can one anticipate the dawn, a sudden
Blazing of sunlight thawing the harshest sky?
How can one not remember summer evenings?
Must not the tired heart sink and must not fear
Bite, like an acid, wrinkles in its stone?

Behind drawn curtains, gazing at the fire,
Think how the earth spins dumb and bound
By iron chains of frost through death-still air;
And how in every street the sealed windows
And orange cubes of firelight, how in houses
Cuckoo-clocks imitate the spring, candles are
Suns. Perpetual winter never known,
Families warm their hands and wait, nor
Ever doubt the season's transience

London Bridge is falling down, Rome's burnt and Babylon
The Great is now but dust; yet still Spring must
Swing back through Time's continual arc to earth.
Though every land become as a black field
Dunged with the dead, drenched by the dying's blood,
Still must a punctual goddess waken and ascend
The rocky stairs, up into earth's chilled air,
And pass upon her mission through those carrion ranks,
Picking her way among a maze of broken brick
To quicken with her footsteps the short sooty grass between;
While now once more their futile matchwood empires flare and blaze
And through the smoke men gaze with bloodshot eyes
At the translucent apparition, clad in trembling nascent green
Of one they still can recognize, though scarcely understand.

Out of their slumber Europeans spun
Dense dreams: appeasements, miracle, glimpsed flash
Of a new golden era; but could not restrain
The vertical white weight that fell last night
And made their continent a blank.

Hush, says the sameness of the snow
The Ural and Jura now rejoin
The furthest Arctic's desolation. All is one;
Sheer monotone: plain, mountain; country, town:
Contours and boundaries no longer show.

The warring flags hang colourless a while;
Now midnight's icy zero feigns a truce
Between the signs and seasons, and fades out
All shots and cries. But when the great thaw comes,
How red shall be the melting snow, how loud the drums!