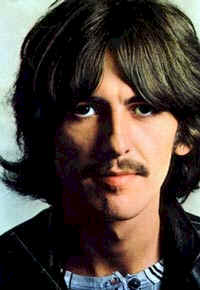 To me, George Harrison is a mythic character, like an Atlas with the world on his shoulders, the kind of mythic character for whom the constellations were named. To me, he is like the stars above. He is still there and will always be there. His presence, his impish sense of humor, his good cheer, his warmth, his spirituality and the kindliness engraved on his face are all still there, ready to emanate from my loudspeakers or loom in my memory. Not only in my memory, but also in the memory of the entire world. A memory that will last as close to forever as conceivable.

I am proud and honored to have been a part of the legend of so mythic a figure---no matter how minor a part of that legend I might have been. Still, mythic as he was, he was also mortal, a flaw that plagues us all. When we die, only our energy remains---our psychic energy. Obviously, George had the psychic energy to command the love of millions. I held him so much in awe that it didn't matter to me whether he considered me one of his dearest friends. What mattered to me was that I considered him one of my dearest friends.

I kick myself with the thought that I might have contributed to his throat and lung cancer by turning him on to marijuana.  I've learned that the only thing wrong with marijuana is the smoke. Smoke is anti-life. But then, George was also a heavy cigarette smoker.

I also kick myself for letting him drift away from me after we had been so close. And now I must suffer the great remorse of abandoning hope of ever seeing him again. Yes, I take George's death as a personal loss. George played a big part in my life, too. Certainly his remark that he "liked her smile? encouraged me into a romance that wrecked my life. But I can't blame George for something that was my own fault. I was a total asshole!

I've been out of George's loop for several years now and I now find myself gobbling up J.D. Heyman's expertly written The Final Days, the cover story about George's Death in Us Weekly:

On Wednesday, November 28, the eve of Harrison's death, Ravi Shankar, his Wife and their daughter paid a last visit, spending the entire day by the former Beatle's bedside, joining Harrison's wife, Olivia Arias Harri'son, and their 24-year-old son, Dhani, also a musician. As he faded in and out of consciousness, Harrison was meditating, a practice of the Eastern religious philosophy that he had embraced after studying the sitar with Shankar in the mid-1960s.  "We used to say that Uncle George was more Indian than any Indian," said Anoushka Shankar. "With each breath he took, he was saying 'Hare Krishna??

One friend who spoke to those at George's bedside said George interrupted his "Hare Krishna? chant to say his last words: an announcement that he knew he was about to take his final breath. And then he died.

was as if George's immersion into Hinduism, Krishna consciousness and Vedic philosophy had prepared George to accept death as part of life.

He once had tried to ease me into joining him as a fellow devotee of the Maharishi Mahesh Yogi by sending me to a meditation teacher.  I was dazzled by the teacher, who, although diagnosed with cancer of the cervix, radiated a certain calm, peaceful, and beatific glow---just as George did. It was a glow I perceived in all the Maharishi's followers I met and I was tempted to become one.

"Will it lower my blood pressure?? I asked.

And so I, too, started practicing Transcendental Meditation, which requires the silent chant of a mantra during morning and evening meditations. But I soon found myself too preoccupied to remember to meditate in the evening and so I began to restrict my meditations to the morning. Something I still do in my own way each day. And each time, I think of George.

But the Maharishi promised "heaven on earth," and he sounded too much like a cleric pretending to speak for God. Although I believe there is a Devil, I doubt there is a God.  In fact, I believe all organized religions to be nothing but scams, especially those that promise an afterlife. I believe that when you die, your consciousness disappears into the same void that didn't exist before you were born. I don't believe there is a heaven or a hell. As poet Gregory Corso once said, "Don't worry about dying, because when you do you'll never know it." I apologized to George, telling him that I could no more surrender my consciousness to a millionaire Indian fakir than I could become a member of a suicide sect.

In Us Weekly, author J.D. Heyman artfully and concisely sums up George's travels around the world seeking "Hail Mary? cures that would lessen his agonizing pain or extend his life. Frail and haggard, he even went to India to bathe in the waters of the Ganges, a Hindu ritual to prepare for death. His wife, Olivia Arias Harrison, is carrying out his wishes to scatter his ashes in the Ganges.

Olivia has had to suffer her husband's ordeal with him. Searching through the Internet for a last-ditch treatment for him, she found Dr. Gil Lederman, who performed experimental therapies at Staten Island University Hospital, blasting tumors with high doses of radiation, relieving pain in a cancer patient's final stages.

When I learned George was in a hospital across the Goethal's Bridge from me, I sent Olivia an email offering any help I could provide. Ringo Starr, Paul McCartney and Apple Records Managing Director Neil Aspinall---all from his original Beatles gang---visited George when he was in Staten Island and pretty soon he felt well enough to sit up and play guitar. After George's death, Olivia emailed me, saying, "I have a lot on my mind? and asking me to respect the privacy of her email address.

The youngest child of Louise Harrison---who also died of cancer---and Harry Harrison---a sweet and convivial Liverpool bus driver---George lived a magical and productive life, in effect moving mountains in his much-too-short appearance on earth. To me, he was like mythic royalty, one of four kings reigning over an era that they succeeded in filling with good cheer. The late Derek Taylor, legendary Beatles press officer, once complained that nobody writing about the Beatles was ever able to express how much fun it was to be them.

Except for the cancer pain he had to suffer at the end and except for any other minor unhappiness he might have had to endure, George must have had a lot of fun being George Harrison. ##