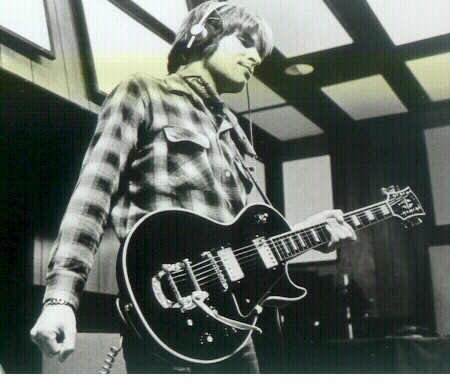 This is a city that tear gasses its doctors, lawyers and housewives, shoots live bullets at its students and would rather let an unused plot of ground stay a garbage dump than turn it into a park.  Across the bay lies San Francisco, bright, happy and mysterious, its lights winking and beckoning like girls from a whorehouse balcony.  But I keep looking out my hotel room window and seeing Alcatraz.

I'm here for a party.  Creedence Clearwater Revival has a new album and John Fogerty has been telling members of the Rock Press that he wants his group to have the same cultural import as the Beatles.  The Rock Press?  I wish I could boast about having done something more heinous than to be considered one of its members.  Is that what got me sentenced to this hotel room?  Just a minute, folks.  I'm going to take another look at Alcatraz.

The album is called Pendulum and John and the rest of his group say it's the most monumental work of their career.  It may very well be.  Certainly this is, the most monumental party Fantasy Records has ever thrown.  For $30,000, a Hollywood press agency named Rogers, Cowan and Brenner has flown in the “choicest” writers the Rock Press has to offer and put them up at the Hotel Claremont, a drafty resort hostelry with miles of worn carpeted corridors, no pictures on the walls, one elevator and paint peeling off the ceilings.

You've never heard of the Rock Press?  You feed them chicken legs, and they write nice things about you.

I knew I had been trapped the minute I stepped on the plane and the stewardess told me we were going to see Barbra Streisand in On A Clear Day You Can See Forever. Never

Spiced brownies didn't help;
I was a member of
a captive audience

have I had to sit through such contrived tedium.  That is, not until I got to Berkeley.  Someone passed around a tin of spiced brownies, but that didn't help.  Neither did taking off the earphones.  When you're a member of the Rock Press, you take what you can get and run.  When you're a smart press agent, you don't let the Rock Press run until you've given it everything you want it to get.  The first thing John Fogerty said before Creedence started to play for us at the party was that he always wanted a captive audience.

As I said, the party cost $30,000.  A Rogers, Cowan and Brenner press release said it cost $60,000 but then RC&B are old hands at making everything look twice as big. Media manipulation?  They ought to work for Richard Nixon.  When we arrived at San Francisco International Airport, we were herded into a bus that deposited us at this hotel.  In each room we found a basket containing a banana, an apple, an orange, some grapes and a half-bottle of red wine.  Later on, a bellhop knocked at our doors, distributing laminated wall plaques.  These were our itineraries.

"Hi!" the wall plaque said.  "Welcome to the CREEDENCE CLEARWATER REVIVAL GALA.  We've planned a wild, wicked weekend (with the help of our record company--­Fantasy-Galaxy Records), a once-in-a-lifetime spin through the center of American political activism."

Cosmo's Factory is an old warehouse in the Berkeley industrial district that Creedence uses as a poolroom, a basketball court, a clubhouse and a rehearsal hall.  For the occasion, it was decorated with balloons overhead and fake grass underfoot.  There were tables with pine sprigs, candles and place settings.  A caterer called Pot Luck provided the food.  Someone said he couldn't tell whether he was at a Polish wedding or a Jewish b'rith.  And yet, it felt good at Cosmo's Factory.  I wish I were there right now instead of looking at Alcatraz from my hotel room.

The point is that Creedence didn't need this party any more than I did.  Of their five previous releases, they've sold 5,700,000 copies.  Their new album, Pendulum, was released only last week and already 1,000,000 orders have been filled.

What Creedence has accomplished has been done without hype, on an almost unknown label and by music alone.  As for me, I didn't go to this party to be served champagne on a cattle car.  I went to pay homage and participate in a celebration.  What do free chicken legs have to do with music?  There are only a handful of groups in this country who are as together as Creedence is and, as drummer Doug Clifford said, "We're more together now than we ever were."

As things turned out, all that was missing during this wild weekend were name badges to hang over our hearts.  They also could have used numbers.  Most of my time here has been spent trapped in this hotel room.  When I should have been out organizing a protest march, I was on the telephone trying to rent a car.  You've probably heard that cash is no longer any good in this country.  When I called Hertz, they'd only accept a credit card.  As for trying harder. Avis wouldn't even answer the phone.  I got up to look out my window at San Francisco beckoning and there was Alcatraz staring me in the face.  I'm still here, looking at Alcatraz.

Now that the weekend is over, I feel like I ought to take a bath.  I still haven't listened to Creedence's new album yet.  I've been too busy trying to break out of my hotel room.  ##

CLICK HERE TO GET TO INDEX OF COLUMN FIFTY-SEVEN