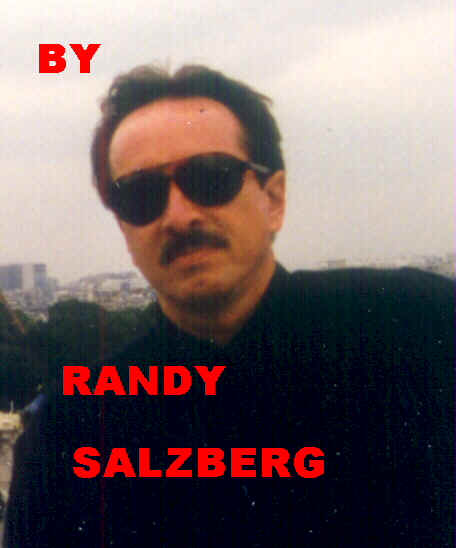 [With this issue, THE BLACKLISTED JOURNALIST inaugurates its new music section, covering contemporary pop music in the way that THE BLACKLISTED JOURNALIST, as one of the most powerful pop journalists of his era, covered pop music during the '60s, writing first for THE SATURDAY EVENING POST and then  initiating his  POP SCENE column in the New York Post---until the Post's notoriously corrupt executive editor, his ego bruised by his jealousy at the column's success, fired the column's author for no good reason, rationalizing his action to others on the  Post staff with an array of fabrications.  Now 72, the founder, editor and publisher of THE BLACKLISTED JOURNALIST just doesn't have the energy to stay up until 4 in the morning getting high with rock superstars as he used to.  So he leaves it to younger, more energetic pop journalists such as Randy Salzberg, Lynn Beck and Kevin Matthews, whose pop music websites are introduced in the following pages, to tell you what's happening in pop music today.]

I first met Al Aronowitz at a party at a photo studio in Washington, D. C. The crowd was mostly musicians, artists, writers, and some really great looking women. I had a photo studio at the time in Takoma Park, Maryland. Takoma Park borders D.C. and is one of the only nuke-free zones in the country [its town fathers enacted an ordinance prohibiting any radioactivity within its borders], and it’s home to leftover ‘60s types, artists, musicians, crazies and any other kind of dregs from that era you could imagine. It was like a little slice of New York in Maryland. I was mostly doing band work, doing product shoots and photographing models---whatever work came along. I was also writing songs and playing out on occasion. It was the time of Jackson Browne, Bonnie Raitt, The Eagles, Little Feat and a lot of bad 70's music.

A friend says I should meet a guy who's a writer type from New York. My interest was much more in the women than in hearing stories about musicians from some glassy-eyed N.Y. writer. My friend says no, no, he's not a glassy-eyed N.Y. writer, he’s a guy who was there with Dylan, The Beatles, The Stones. The mention of Dylan did the trick. Dylan had always been my songwriting idol, and I was always up for something new about him. It was then that the balancing act began between good-looking women or hearing stories about Dylan. No sense ignoring either. So I heard some stories about Dylan and left later with a sweet little blond who sang with a group in town.

Later, I would met Al in his apartment on 15th Street Northwest in Washington, D.C., around the corner from the Soviet Embassy, in an apartment building where they were as likely to speak Russian as English. The halls where filled with Russian spies and CIA types and the FBI had a constant stakeout keeping the building under surveillance.  Al considered himself to have been flushed down the toilets of New York journalistic stardom to the sewers of D.C. He was blacklisted, banned and broke. He had managed to burn most of his bridges to the rich and famous and was working on torching the few remaining lifelines. Al was the wake-up call for the stars when he had his New York Post Pop Scene Column. Now he was bitter, angry, in isolation, but still writing, always writing, and a friend of mine.

Twenty years later I have an internet business, Songscentral.com  and I publish a daily Internet newspaper The Washington Song. I learned the power of the Internet from Al. On the Internet, you can say what you want without editors tearing out your heart, and you can speak to the world. I started by just wanting to put out a CD of songs I had just finished and it turned into a whole lot more. I travel light on the net. I publish and post many times a day, when the fire burns and the story is hot. Al, whose THE BLACKLISTED JOURNALIST is a monthly, still manages to piss me off on a regular basis, and I guess I piss him of regularly, too.  But I will always be his friend.  ##

CLICK HERE TO GET TO INDEX OF COLUMN FIFTY-SIX