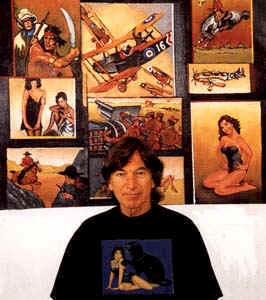 By now, readers of THE BLACKLISTED JOURNALIST should be acquainted with Ed Adler.  His drawings illustrate Columns Fifty-Four and Fifty-Five.  Ed has had a long and prolific career as an artist.  His undergraduate studies at the University of Massachusetts were followed by a two-year stint with the Army of occupation in Europe, where he spent much of his time creating posters warning GIs against the evils of sex, alcohol and Communist spies.  Later, in the 1960's, the GI Bill saw him through five years of study at the American Art School and the Art Students League; it was the era of sex, drugs and rock and roll and his paintings of the period reflected the kaleidoscopic mood.

With the end of the ‘60s, Adler saw the approaching decade of Yuppiedom and in the spirit of pragmatism entered grad school at New York University.  He never really left: after earning both masters and Ph.D. degrees in art he stayed on to teach.  He remains today an Associate Professor on the adjunct faculty.  The academic world offered adventuresome opportunities: he has taught at the Sorbonne in Paris, lectured at many universities and conducted numerous seminars and conferences on the Beat Generation, a subject in which he is generally considered an authority, having both been a beat in his early youth.  He still considers himself to be one today,.  He calls his current period his “middle youth.“

An interest in folk and tribal art has taken him to far-reaching remote regions of the Philippines, China, Peru, Guatemala, India, Kenya, Nepal---41 countries, so far.  He has climbed mountains, explored the Amazon, and run marathons in New York, London, Paris and Moscow. But mostly he paints.  Every day and most nights, at studios near the seaport in Manhattan and in his home in Westchester.  The work has evolved from early Matisse-inspired paintings of the 1950's, when he studied with his mentor and teacher Jack Lubin, a Matisse protege, through the politically and environmentally driven paintings of the 1960's and 70's, and into the current mode of reflection on the art that made him want to paint in the first place: the bubblegum war cards of his early childhood, the pulp fiction cowboy novels of his teen childhood and the pinups and Felliniesque imagery which followed.

Besides Matisse, he has been largely influenced by Van Gogh, Picasso, and the American and British Pop Art of the 1960's.  His work has been exhibited in The Museum of Modern Art, The Smithsonian, The Brooklyn Museum, The Los Angeles County Museum, and The Santa Monica Museum of Art.  He has had many exhibitions at New York University and at galleries throughout the country.  He is represented in Europe by Joanne Eder who can be emailed at anamericaninparis@wanadoo.fr. The following painted vodka bottles are more examples of Ed’s work: 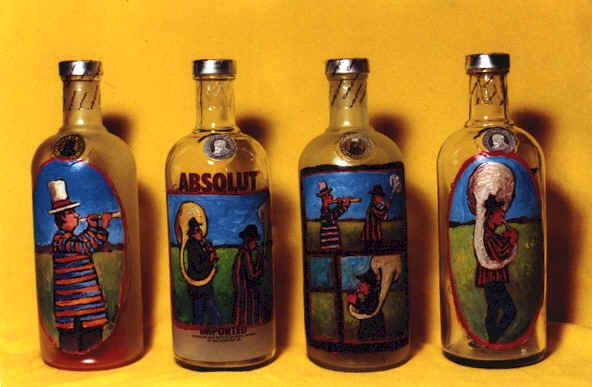 For still more examples of  Ed’s work, visit his website at http://www.edadler.com/postpop.htm.  ##

CLICK HERE TO GET TO INDEX OF COLUMN FIFTY-FIVE