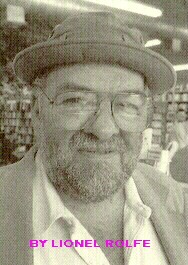 [Lionel Rolfe is the author of DEATH AND REDEMPTION IN LONDON & L.A. from which this is excerpted. He also wrote FAT MAN ON THE LEFT: Four Decades in the Underground, IN SEARCH OF LITERARY L.A. and coauthor of BREAD AND HYACINTHS: The Rise and Fall of Utopian Los Angeles. DEATH AND REDEMPTION IN LONDON & L.A can be obtained from deadendstreet.com.]

A number of people in Los Angeles have offered suggestions as to what I   so liked about London.

“They¹re thirty years behind us. They’re still in the ‘60s,” said one.

“In what way?” I responded.

I don¹t think that is really so. London has changed a lot since I first was there in the early ‘70s. My impression on the street was Londonershad more cell phones than the denizens of Los Angeles. Everyone was on computers and the Internet. I saw ads all over the Underground for net services.

But in case my critics are right, I contemplated what it was about the ‘60s I might be still been attracted to.

Although we knew a lot was wrong with the world in the ‘60s, we had something major that folks at the end of this particularly brutal century do not have anymore: a sense of hope.

Much of what happened in the '60s was simply an explosion out of the dull rigidity and repression of the Eisenhower ‘50s and the McCarthy Era.

But there was an economic rationale, a base which supported what was happening too.  Back in the ‘50s and ‘60s, a guy with a regular job in a factory could work and pay the rent and all the bills without his wife having to go out to work. You didn't need two salaries.  And, in fact, a lot of women didn¹t work.  Partly because women weren¹t encouraged to work, but also because they didn¹t have to.

A lot more people then had union jobs, where decent pay, decent hours and security were what they expected, and got.  This was the country's legacy after coming out of the Great Depression of the ‘30s during which its enormous organizing drives garnered  social justice, which the post-war-against-fascism ‘40s era solidified.

Back then only one spouse had to hold down a stupid, boring job---not both, as is the case nowadays. Women are now allowed to do the same stupid meaningless work and paper-shuffling men are allowed to do.  Wow!  Hooray!

Now women are empowered; they can be sharks and corporate executives just like men.  Hooray.

There was a lot of social repression in the generation preceding the ‘60s.  Jack Kerouac¹s On the Road reflects that. McCarthyism reflected that.

And the late ‘50s and early ‘60s broke down those barriers.  We stormed out of our hothouses, the coffeehouses where jazz was played, and new kinds of poetry and prose were written and read­--where blacks and whites hung out together. A lot of the fight for black people¹s equality began in the coffeehouses.  Certainly the plight of the blacks has always been the country's greatest inequity.  So, symbolically, the culture's liberation had to begin there.

The civil rights movement in the early ‘60s was beginning. From the Xanadu, the coffeehouse I went to near Los Angeles City College, people headed directly to the Deep South to assist in voter registration drives.

We marched on picket lines to end segregation.  Some of the social bullshit seemed to be ending and we still could make a living. Hope was stirring.

We attacked the social repression of the ‘50s which was a backlash and antidote to the spirit of social justice fostered by the Depression and the War against fascism.  Another important trend was happening.  Big technological changes were occurring, from printing to cybernetics.  Camelot started us going to outer space.  By the early ‘50s, a guy named Norbert Weiner, an MIT mathematician, had already coined the word, ‘cybernetics, which was all about automation and machines making machines.

The Los Angeles Free Press, the first of the Underground newspapers spreading across the country, began in the early ‘60s at the Xanadu.  Art Kunkin, the papers founder and a Xanadu regular, soon was selling 100,000 copies a week---for 25 cents, at a time when the Times had recently raised its price from a nickel to a dime.  Opposition to the war in Vietnam was part of the reason. But none of it could have happened had there not been a major technological breakthrough in printing. Hot type was giving way to cold type and offset printing. This meant you didn¹t have to be a millionaire to start a newspaper. A varitype was a lot cheaper than a hot-lead linotype. And the whole underground press movement took off.  And mightily affected the overground press. The Counterculture could not have been born without a change in the way printing presses worked.

I got my start writing for the Los Angeles Times at the very beginning of the '70s.  Editors from the paper¹s Sunday magazine, West, picked some of the more talented Los Angeles Free Press scribblers to write for them.

Two things ended that heady feeling of hope.  Camelot was brought down by bullets from several assassins.  For a while it seemed as if nothing had changed. The ‘60s seemed to last right into the early ‘70s.  But the phony oil crisis of 1973, when the Seven Sisters showed us who really owned the world, brought an end to those good times.

I must admit I wasn¹t always enamored by the cultural revolution. A lot of people were consumed by it. Then came the bad economic times that began in 1973.

I experienced being mugged by the Seven Sisters directly. I had just received a $10,000 contract in 1972---which would be worth a lot more nowadays---to write The Menuhins when the Oil Crunch came.  Overnight my money was worth half what it was.

And throughout society, the notion of a good union job began to disappear, as giant conglomerates---the oil companies only the first---started moving in to declare an end to the way things were in America, economically and culturally.

Nowadays American corporations are extortionists: they tell us they can take their business anywhere, so we¹d better learn to like living as slave labor lives in the Third World. These big corporations began running roughshod over any efforts to mediate the excesses of predatory capitalism.

Unions fell into disrepair. Talking union became anathema to a generation who had no idea why people had them in the first place. We were told that life should be nothing but work, work, work---partly because real wages have fallen so much since the ‘60s, proportionately.

The biggest achievement of the Reagan years? Shift the tax burden to the little guy

In the ‘60s the big talk was of the imminent Leisure Time Revolution.

The irony and reality?  Nowadays the media celebrates Supermom, who works, raises children and cooks.

So who were the heroes and the villains?  Will the ‘60s ever return?

The hope that people could change things---engendered in the ‘60s with the rise of the civil rights and the anti-war movements---has not survived well. For a while, Counterculture newspapers, books, movies and music flourished. The good times, they never seemed to stop rolling.  Camelot, never claiming revolutionary status, was still part of a continuum engendered by the Counterculture, and was dead long before John Kennedy Jr. dove his airplane into the cold, dark ocean off Martha's Vineyard.

Some Counterculture values have found their way into the mainstream, but not all. In some ways, racism has been modified, although it is ever present beneath the surface. War does not seem quite as onerous as the Vietnam adventure was, but this may be due to some clever disguises.

The drug component was the most suspicious part of the Counterculture. Pushing it along were the proponents of a mush-brained philosophy combining revolution and mysticism and a belief that drugs could liberate.

And don¹t think it was just a bunch of hippies pushing that line.

Henry Luce in his Time-Life magazines told us how great LSD was. The CIA conducted all kinds of horrendous experiments on people using mind-altering drugs which were initially designed to disable and disorient enemy armies.

Many hippies, who survived these drugs, either died on the streets or expired in nut houses or became today¹s BMW driving Yuppie scum.

New Age stuff fits right in with this nation¹s historical puritanical social control mechanisms burdening its populace. On the surface, the bizarre crusade against President Clinton by his persecutors over sexual matters, which most recognized as so much hypocritical blather, seemed indicative of a new more insidious kind of McCarthyism in the making.  Hey, if they can do in a president for an illicit blow job, think what they can do to the rest of us.

Of course the Monica Lewinsky thing was something deeper and more insidious than a quickie in the back room.  Essentially, it was the insurance companies trying to pay back the Clintons for trying to institute a national health plan.  The insurance companies like it the way it is. They have a tremendous stake in collecting premiums from the healthy and leaving the poorest and the sickest for the taxpayers.

Our novels, our music, our films, increasingly remind me of Brave New World and 1984. Is there a hope for a new reawakening, such as occurred in the early ‘60s, when people began busting out from the years of repression?

We can always hope that underneath the dreary exterior of the harsh, gray life of the ‘90s, new cultural and social forms are waiting to be born.

Perhaps the Internet will be the new technology that makes this so.

Then revolution will again rekindle hope, and the people¹s rulers will tremble once again.  ##