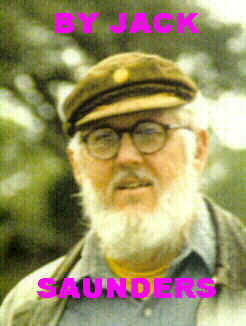 Cosmos and Marjorie Kinnan Rawlings sat inside a screened porch at her cracker house in Cross Creek, drinking iced tea with mint leaves in it.

A:      An aunt brought it from Scotland.  I’ll give you a cutting when you leave.
You look winded.

Q:      I don’t know.  I had it in before I drove to Wewa.  The man put in new plugs, spark plug wires, distributor cap, and rotor.
It ran fine all the way down.  I opened her up.
But coming back, it started dying at idle and running rough at low speeds.  Leaking oil.  I may have blown a gasket.
I don’t know.

Q:      What kind of a writer do you think you’d have been if you hadn’t moved down here and bought an orange grove.  Made friends with your neighbors.

A:      I shudder to think.
Deciding they were a subject for literature was a slow process

A:      You have to find your own voice.  Sometimes that arises from your subject.  An editor can recognize it.  Can say, “That’s not it,” or, “You’re getting warmer.”  Readers can help you there, too.  But no one can tell you what it is, or which direction to head in search of it.

Q:      Scribners, and Maxwell Perkins, had Fitzgerald, Hemingway, and you under contract at the same time.  Did they treat you any different because you were a woman.

A:      They might have tried.
But I had old Max’s number.
He was henpecked.  Not to mention a bust-out drunk, like everybody else in the trade, back then.
He changed less of my copy than he did Fitzgerald or Hemingway.  Tom Wolfe he destroyed.
A writer has to lead.  The publisher follows grudgingly, dragging his feet.  Telling you why what you want to do can’t be done.  With advice from sales, from legal.  From the Watch and Ward Society and Mrs. Grundy.
The editor’s the point man for that operation.  The company man, doing the dirty work, so the publisher can act like he’s above such mundane things as censorship and pandering.

Q:      Didn’t you go deep sea fishing with Hemingway in Bimini?  Did he ever hit on you?

Q:      You have a sense of humor and a spark of intelligence in your eyes.  Mischief.  That’s sexy.
Still, I think Mary Steenburgen was miscast, in the movie.

Q:  Carolyn Chute.
Come to think of it, there aren’t that many dowdy, frumpy actresses.  Out there running a working orange grove.

Q:      You’re on the Florida Artist Wall of Fame in the New Capitol, in Tallahassee.  Your house is a state park.  I once asked the state to buy my house and turn it into a museum, naming me the curator of my own collections.  Like the Hemingway House in Key West.  Designate me Living Fossil.
Put my tin outbuilding, or shed, in the Museum of Florida History, with the mastodon skeleton from the Aucilla River and the Indian River orange crates.
The state declined.

A:  So you wrote The Sepulchers of Gulf County.  About the rental storage unit where you house your stack.  The Volcanoes of Wakulla County.
It all works out.
Just hang in there.  It’s a tough racket.  ##

Cosmos and Zora Neale Hurston sat in straight-backed chairs outside a dilapidated shack with a sand yard, under the shade of a chinaberry tree, a fice dog near Zora Neale’s chair.  Eau Gallie, Florida.  Hard by the Space Center, where she last worked in the Base Library at Patrick AFB—a library which contained her books.  Like Cecil Taylor washing dishes in a restaurant that had his records on the jukebox.

Q:      I’m wondering about why you didn’t become an anthropologist.

A:      Honey, I did become an anthropologist.
I studied voodoo in Haiti.  I went into work camps in the south and collected folklore.  I published books on those subjects.
Do you know who paid for Margaret Mead’s field trip to the South Seas?

A:      Her daddy.  That’s who becomes a professor of anthropology.  People with rich daddies.

A:      She didn’t have a rich daddy.
They’ll let a token nigger through, once in a while, if you’ll do their dirty work.  Suck up to them.  Keep your mouth shut about what you know about them, and call somebody other person names.
You know how I feel about Alice Walker being my champion?

Q:      Ain’t it the truth.
Marjorie Kinnan Rawlings’ maid says the reason you were buried in an unmarked grave is you high-hatted the people of Eatonville.  You were uppity.

A:      That’s ridiculous.
I was buried in an unmarked grave because I died a ward of the state in Fort Pierce.
No way would I go back to Eatonville on welfare.  I’d been too grand.
But that was me, not them.

Q:      Do you think it was a judicious career move to call the writers of the Harlem Renaissance the niggerati?

A:      It killed Wallace Thurman, to break ranks.  Proving what I had to say.

CLICK HERE TO GET TO INDEX OF COLUMN FIFTY-THREE