SPRINGTIME IN THE JUNGLE

I was stoned plenty and then some.

Never in New Jersey had I been this whacked on reefer.

I would have let sleep take me long ago, but here in the tropics the trade winds and turquoise waters can energize you like love at first sight. The paint on the outside of these shacks in Negril were colored as bright as a child's dream's. Bright and varied as the inside of a Greenwich Village pad in the mid '60s. Faded cotton prints hang as doors and windows. Jamaica needs little protection from the cold, which only seems to come after the sun goes down. A blanket is all you need on the coldest winter night.

Every neighborhood has a miniature store on the roadside. They're more like lemonade stands with roofs. They sell matches, cigarettes, pop, red stripe beers and buds, not budweisers. Most of them have the name, "beer joint," which means beers and joints. For a couple of bucks they'll roll you a number as thick as your thumb.

I stopped looking for quality days ago. It's all different and twice as potent as the commercial smoke in the states, which can market in price close to that of gold. Here the price is $500 of they're money, which is around $13 in the U.S. You are handed buds a good foot long that must weigh an easy ounce. The T.H.C. crystals glimmer in the tropical sun. Here, the grass is brown and has that skunk, that jet fuel aroma. It's "brown skunk", the best of it. It's so potent you can only hold it in for a moment before you feel it explode in your lungs.

We had rented a two-story bungalow on the cliffs by the sea; Owen, the gardener, had brought me a taste of the weed his brother-in-law was farming near a little town called Orange Hill, not far from our seaside cottage. Owen had proudly reached into his pocket and pulled out a crumpled piece of saran wrap. Then he carefully unwound the cellophane prize, revealing a fresh odiferous bud big enough for a family-size joint.

Owen hand's me this with authority so I can sample the Orange Hill contraband. Feeling friendly I think to hand him a few bucks, but on second thought, that seemed in bad taste. So I made a mental note to tip him later when we leave.

Straight away I'm making a b-line to the scissors to cut this fresh stuff into something I could roll. In Jamaica they sell paper's in one size "Huge, double wide, double long huge". It's all good down there, but Owen's stuff was beyond that. This cat took the time and effort to let me in on it.

You can't tell how old Owen is. He walks and works like he's 30, but he might be 60. Either way he's not too old to take a couple of tokes with me at 8 am. The most I have to do today is take a ride to Orange Hill to investigate where this heavenly shit I'm smoking came from. But Owen has to go back to work.

As I'm following Owen's directions through the winding mountain road, the earth takes on a reddish clay color. I reckon that's why they call it Orange Hill. My grown children are with me, my daughters Corey and Brie. It's midday hot, not hot enough for an air conditioner but hot enough for a beer, or the local hatched grapefruit soda called Ting. On the left up ahead, there's a community watering hole, bigger than a lemonade stand and smaller than a bar.

I pull over and Corey , my older girl asks, "What are you doing?"

"Getting something ta sip on." I answer.

There's a gathering of men in and outside of this little place. Corey's afraid I might get hassled cause I'm white and outnumbered. After all, we're new here. She's heard stories of gang types around Kingston chopping off fingers to score wedding rings. But this ain't Kingston, and my attitude ain't all that white. Still I guess it doesn't hurt to be cautious so the girls stay in the car.

As I'm surrounded ass-deep in dreadlocks, I order a couple of tings to go, then ask what the local smoke scene is all about. A tall clean cut young feller taps me on the shoulder from behind. I turn to find him handing me a lit joint the size of a Nathan's hot dog . I take a hit, "sweet stuff" and another, as my lungs go the distance as long as they can. Then I'm coughing, rushing, smiling, and we're all laughing.

Soon I'm back in the car with the sodas and the joint. I wave an extra friendly goodbye and drive away. Now Corey's coughing and I realize "shit, I stole the guy's joint", nd here Corey was worried about me getting ripped off. It was late so we headed back to our surfside cottage on the cliffs to watch the sun sink into the sea with the color of Orange Hill.

That night was the last easy chance we had to go back to the hill. There was a construction project going on the main road out of town in the direction of the little bar where I stole the man's joint. I had hopes to return to do a "the-drinks-are-on-me number" but would have to make a good 20-mile trek and go around the other way through town. The hole in the road was deep enough to trap an elephant, so only a motorcycle could get by.

Later that night Hopeton, the night security man, told me the road would be closed for a good week. I wondered how the local workers would commute. They were mostly domestic help for the white tourists. Maybe the tourists would have to wash their own socks. The mountain folks grow the herb and finger hash that filters down to the fast talkin sellers that cruise the beach resorts like sharks.

Orange Hill is one of the communities that takes pride in growing these commodities. A similar town is Grange Hill, closer to Montego Bay above a coastal town called Green Isle, another good place to score. I was already making plans to venture there the following day.

Hopeton and I got high after dinner while the girls hung around the second story deck on hammocks, counting shooting stars as the surf echoed through hollows of lava rock below. Hopeton's a likable fella and father of an 11-year-old girl and a boy, 7. I met him a few months ago on an earlier trip and made a point to bring him some simple gifts for his children, gathering some Disney hand puppets, colored pencils, sketch pads, and a sharpener. And one of my youthful favorites, some Pez dispensers with more refills than anyone's dentist would like.

After I gave Hopeton these unexpected presents, he seemed to examine them with the eyes of his children for the first time. This was so great, I could walk away and feel I wasn't snubbing him. There were nights when I really did blow him off just cause I was so exhausted, between the strength of the southern sun and endless Edward G. Robinson cigar-size joints, the only sound you wanted to hear was your bed calling.

In the morning, I'd bring Hopeton a cup of local blue mountain coffee right around the time the roosters let you know they were still alive. This was VIP treatment to Hopeton, but at night time I wasn't much company. He probably figured I was like the rest of the white spoiled people that come here. Who knows, maybe that's right. I guess for the money these beautiful island people would leave here to come to the States, but between the fresh tropical fruit, vegetables, fish, waterfalls, and the Caribbean sea with its sweet trade winds, its a lot to give up---not to mention the beautiful people that grow my most lovable herbs up in the bush.

Anyone's sky piece can get Jake in Negril
Bolivian flake's on my plate on the sill
Temptation resisted, they say's worth listening
Thank God blessed me with weakness of will
Destiny hunts where there's just time to kill
Its the same everywhere time can stand still
Where money's a short for good dope as your will
All the sale's aren't on boats in Negril. 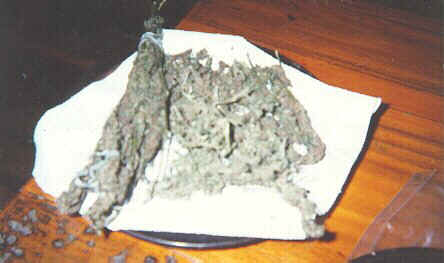 Brown Jamaican Skunk scored between Montego Bay airport and the bungalow. We almost had to run to escape the dealers. One pursued us on a motorcycle and we finally pulled over and gave in to his pitch, which accounts for the buds on the left of the plate. ($20 US--about an ounce or two.)


CLICK HERE TO GET TO INDEX OF COLUMN FORTY-NINE