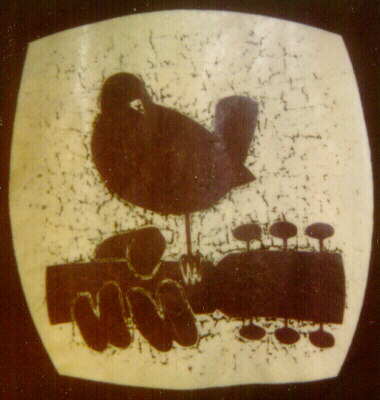 MY DYLAN PAPERS: PART 2
THE ISLE OF WIGHT

The enormity of the monster roosting in the alfalfa field on Max Yasgur's farm triggered a gigantic worldwide double take. Nobody would have paid all that much attention to the Woodstock Festival except for the massive crowd it attracted. The public couldn't help but fixate on the spectacle of this monster wallowing in the Catskill mud while another monster of a traffic jam kept another million and a half people trying to get there stuck on impassable highways. But although the populace fell for the monster at first sight, this massive creature sent nothing but a chill down the backs of the authorities. Obviously, the monster was enjoying an orgy of sex, drugs and rock and roll on the slope that formed the natural amphitheater facing the Woodstock Festival stage. But the authorities worried over what else this particular creature was capable of doing.

For governments, mobs are what nightmares are made of. For governments, there is no monster more terrible to contemplate, to confront or in any way to contend with than an enormous mass of people. Some 20 years later, for example, monsters almost as large as the Woodstock beast would succeed in overthrowing the governments of Eastern Europe, in some cases without firing a shot. It takes only a twitch, a sneeze, a shout for an apparently benevolent monster to turn malevolent. Meaning that it takes only an urge for a crowd to surge.

Could this mob turn ugly? To governments, all mobs are ugly, especially when the mob has so much reason to be fed up with the government. When enough people got fed up enough to march in the streets, the Berlin Wall crumbled. At the time of the Woodstock Festival, America was building its own walls. President Nixon found it so necessary to protect the White House from anti-war protesters that he surrounded it with a wall of Washington Metro buses, parked bumper-to-bumper like a wagon train pulled into a circle against an Indian attack. The Vietnam War had undammed an ocean of discontent. Many-legged monsters almost as enormous as the Woodstock crowd already had started showing up on the Washington Mall. Some ten months after Woodstock, a crowd of antiwar protesters would make America's government nervous enough to stage America's own Tiananmen Square---the Kent State Massacre. Not since the Civil War would America be so divided.

At the Human Be-In in San Francisco's Golden Gate Park in January of 1967 , a crowd of 20,000 lit up joints in a spontaneous public nose thumbing at the laws against marijuana. Some six months later, at the Monterey International Pop Festival, the number of pot-smokers willing to light up in public grew to some 35,000, all smoking marijuana spontaneously without a single bust. At Woodstock, a dissenting counterculture couldn't resist the idea of climbing out of its discontent to join in a three-day party that would feature almost all its music icons on the same stage. Bedecked in tie-dyes and other counterculture tokens, close to a half-million war-protesting and rock-loving pot-smokers surveyed one another and said:

"Gee! There sure is a shitload of us!"

This Woodstock monster did its own double take.

The Woodstock Festival featured almost all the music heroes of the era but not the three acts which at that time were considered rock royalty---the Beatles, the Rolling Stones and Bob Dylan. Otherwise, Woodstock offered the most all-inclusive collection of headliners available. Although Bob, the Beatles and the Rolling Stones weren't on the bill, some 30 of the biggest names and hottest acts in rock and in folk were---including George Harrison's friend, Indian classical sitarist Ravi Shankar. He'd become the rage among acidheads and other druggies because they found Shankar's ragas groovy to trip out on. But at the 1969 Isle of Wight Festival, there was only one truly big-time headliner. Bob Dylan.

The Isle of Wight Festival was scheduled for August 29 and 30, a Saturday night and a Sunday night, with Dylan's triumphant return to the concert stage scheduled on the Sunday night. Booked to headline on the Saturday night was The Who, also one of the headliners at the Woodstock Festival. Another Isle of Wight headliner was Joe Cocker, who was then only starting to make it big. But in those days, you couldn't mention either Joe Cocker or

There were 26 other acts
on the bill, including
Marsha Hunt and the White Trash

The Who in the same breath with the Rolling Stones, the Beatles or Bob Dylan. The most that could be said for The Who and Joe Cocker at that time was that they were a lot better known than the 26 other acts on the bill, typified by such transient dazzlers as Marsha Hunt and White Trash. At the Isle of Wight Festival, Dylan was the only monster on the bill capable of attracting a monster of an audience. In refusing to play the Woodstock Festival and in then letting himself be talked into playing the Isle of Wight, Dylan in effect was telling England's counterculture:

"C'mon. Let's hold our own Woodstock."

And so, on the Isle of Wight, a dot of land that certainly wasn't the easiest place in the world to get to, Dylan almost single-handedly proved an enticing enough attraction to collect an audience sometimes estimated to be as few as a 125,000 and sometimes as many as 250,000. This was more than twice the island's normal population and more than three times the largest crowd ever to protest the Vietnamese war in London's Trafalgar Square, a crowd that until then had been considered the most enormous gathering of pot-smokers in British history. The Times of London found itself impressed enough by the size of the audience Bob attracted to headline its story: The Isle of Dylan.

To find out what happens next... Read Al Aronowitz's book "Bob Dylan And The Beatles, Volume One of the Best of the Blacklisted Journalist".

As the man who introduced Allen Ginsberg to Bob Dylan, Bob Dylan to the Beatles and the Beatles to marijuana, Aronowitz---acclaimed as the "Godfather of rock journalism"---has been known to boast: "The '60s wouldn't have been the same without me."


"Bob Dylan and the Beatles" is temporarily out of stock.