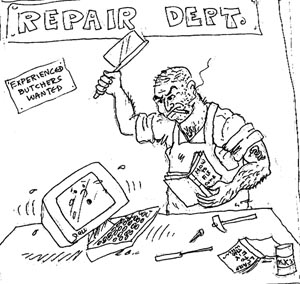 WHERE TO GET GYPPED

[This column, which contains a letter I intend to send to the New Jersey Division of Consumer Affairs, will explain why there have been no additions to my web site this summer. I also spent a week in Lenox Hill Hospital with the Nixon disease, phlebitis, a blood clot in my right leg. If a piece of the clot breaks off and travels to my heart, brain or lungs, I'm kaput. And so they put a filter in my neck vein to try to catch any debris from the blood clot.

RE: COMPLAINTS AGAINST COMP USA INC AND STAPLES INC FOR UNFAIR AND UNLAWFUL BUSINESS PRACTICES

I am founder, editor and publisher of an on-line magazine known as THE BLACKLISTED JOURNALIST, which, with the help of a staff of volunteer contributing writers from the far reaches of the Internet, has now succeeded in putting 45 issues on the Web, with each issue called a "Column." Readership (approaching 70,000 as of September 1, 1999,) had continued to grow until my hard disk became so full that, on December 21, 1998, I brought my Gateway 2000 into the Comp USA store at 305 Route 22 East, Springfield, NJ 07081, where I paid $329.99 for a new Maxtor 15.1-gigabyte hard drive. I also paid Comp USA another $109 in installation charges to put said hard disk in my computer. Which Comp USA, out of obvious, egregious and gross incompetence, failed to do so properly on that occasion and on several subsequent occasions.

I kept making the 40-mile round-trip to Comp USA to keep bringing the computer back, but Comp USA kept failing to properly install the hard drive, denying me access to and use of most of the 15.1 gigabytes. Sick and tired of tearing my work station apart in vain, I turned my attention to putting my columns on the Web---as attested to by Columns 41, 42, 43, 44 and 45, the January, February, March, April and May issues now on the Internet.

I had formed a loose alliance of writers from around the Internet willing to join me in an effort to make THE BLACKLISTED JOURNALIST a significant voice on the Web, capable of attracting a readership that would attract advertisers, thus creating an income for all who had contributed to the BLACKLISTED JOURNALIST. By May 17, 1999, I found myself in so desperate need of the remainder of the 15.1 gigabytes of my newly purchased and improperly installed hard disk that I again went through the agony of tearing apart my work station, disconnecting my computer and driving the 20 miles back to the Comp USA store in Springfield, N.J.

There, I explained the situation to the general manager of the store, one Charles Brasby, who demanded that I pay an $89.97 service fee to have his technical staff even look at my computer "because"," he said, "the installation was out of warranty." That led to a heated exchange between Mr. Brasby and myself, who expressed outrage at being unduly cheated in this manner. By this time, the data on my computer exceeded the capacity of my Seagate tape backup system. When I finally agreed to pay the service fee, I asked Mr. Brasby to install a 30-gigabyte OnStream backup system so the hard drive could be backed up before his technicians went to work on the computer.

"Good idea!" he huffed, turned his back and walked away. I imagine that kind of behavior is one of the reasons Comp USA announced that it is being forced to close a number of its stores.

When I returned to Comp USA on May 20 to pick up my computer, the OnStream backup system had NOT been installed. Instead, the clerk practically threw my computer back at me, saying:

"They can't fix it without first erasing everything on the hard disk!"

Which, according to testimony below, proved to be a blatant lie and another example of Comp USA's egregious incompetence.

I am 71 years old, an obvious senior citizen with white hair and I have absolutely no knowledge of computers other than how to use them as word processors. It is obvious to me that Mr. Charles Brasby and the staff of Comp USA took advantage of my age and my lack of knowledge of computers to bamboozle and ultimately defraud me. It was because of my advanced age, my lack of knowledge of computers and my obvious state of desperation that Staples, too, took the occasion to bamboozle and defraud me when I next brought my computer to the Staples store at 708 Hadley Road, South Plainfield, NJ 07080, which has a computer repair department. After my experience at Comp USA, I desperately needed help for my computer.

I also brought along the 30-gigabyte OnStream tape backup system I had bought at Comp USA but which Comp USA had never bothered installing. My first instruction to the Staples Tech Department was to install the OnStream and back up my hard drive. My second instruction was to leave the machine alone if there were any danger of losing any data.

Words can't express the anguish, the dismay, the shock and the feeling of having been violated that went through me when I learned of this outrage. Gone! All the makings of THE BLACKLISTED JOURNALIST'S future issues had been wiped out, murdered, sent to manuscripts' heaven! All the planned ingredients of Columns 46, 47, 48, 49, 50, and 51 of THE BLACKLISTED! JOURNALIST! My manuscripts and manuscripts from writers all over the world! Literary contributions from writers in China, Australia, Colombia, Argentina, Canada and throughout the U.S. Hours and hours of work had been carelessly and thoughtlessly destroyed!

Consequently, I've been forced to suspend publication of THE BLACKLISTED JOURNALIST and miss publication deadlines. And consequently, I've been forced to suffer delay in my quest for income for me and for my contributing writers. In other words, I have suffered severe potential financial loss as well as real financial loss. I have been forced to suffer severe anxiety and depression. I have been forced to visit my cardiologist, who has put me on stress medication. I am a heart patient who underwent quadruple bypass surgery in 1996 and it is obvious to me that the mental anguish and stress forced upon me by the egregious incompetence and outright fraud of Comp USA and Staples will reduce my life expectancy. I have been severely wounded by Comp USA and by Staples. I have suffered great damage. Since my encounters with Comp USA and with Staples, my health has taken a decided turn for the worse.

Let me explain the extent of the fraud visited upon me by Staples, whose representative misinformed me that the 15.1-gigabyte Maxtor hard drive I had purchased at Comp USA was "defective." Was that merely an attempt to get me to buy a new (and unneeded) hard drive from Staples? Staples did not have a 15.1-gigabyte hard drive in stock but instead sold me what Staples claimed was a 13.1-gigabyte Maxtor hard drive. By the time Staples had finished with me, my bill came to $384.82. In addition to which Staples' Tech Department proceeded to render my computer totally unusable to me. For instance, the Staples Tech Department eliminated my WORD5 program, which was the only word processing program I was thoroughly acquainted with. I was right next to the technician when I saw him about to replace my PAPERPORT program with a VISIONEER Program, which I knew from previous experience would render my scanner useless to me.

"Please," I begged him "Don't put that program on!"

But with a smile, he did so anyway. He also rendered my B drive inoperable. He was a very personable fellow. He joked and he smiled and he kept reassuring me that nothing would be lost. Until he showed me that all my files since December had been erased.

I have been too preoccupied with seeking satisfaction from Comp USA and from Staples even to begin the hours and hours of attempts necessary for possible restoration of all the files that were destroyed. Staples may say Comp USA did it, Comp USA may say Staples did it, I accuse them both of sharing the responsibility. Obviously, neither Comp USA nor Staples belongs in the business of repairing computers and I ask you to enjoin them from doing any further computer repairs and I will seek all remedies available to me in law and in equity.