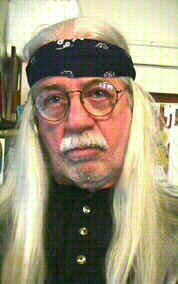 To me, cyberspace is like outer space: unlimited. Look at the sky on a cloudless night unpolluted by the glare of a city's lights and you see a universe of millions and millions of stars. That's what websites in cyberspace are like, millions and millions of stars. And the brightest of them attract the most attention. They are the ones visited by the most pairs of eyes. In that regard, Joseph Grant's BookZen is one of the brightest stars in cyberspace.

Joe never really explained to me how he got connected to the Internet in the first place, but he said he already had a website when Ken Wachsberger asked him to write a history of the Prisoner's Digest International. Joe had founded the PDI in the '60s after spending time in the federal clink at Leavenworth.. But that's a whole other story.

Ken Wachsberger was an editor at a small publishing company who was editing a two volume set of books he had entitled: Voices from the Underground: Volume One--Insider Histories of the Vietnam Era Underground Press, and Volume Two--A Directory of Sources and Resources of the Vietnam Era Underground Press. Joe's PDI history was to be a part of this two-volume set. But what happened was that the publisher that Ken had a contract with got cold feet when the books were finished and ready to go to press.

"The publisher was afraid of libel," Joe told me. "Because a lot of the stories, mine included, named undercover agents that had infiltrated newspapers. . . Yeah. And had infiltrated the underground press. In our case, they had infiltrated, planted drugs which resulted in a mass arrest (The newspapers jokingly reported that there were more lawyers in the courtroom that morning then there were defendants.) Those same agents were directly involved in setting up a killing."

Who, what were they undercover for?

"Well, with my paper, we had a state prisoner and a federal prisoner that had been released specifically to join our organization."

To spy on you for whom?

"To spy on us for the Feds and the government. And this all came out in court. This is not just a paranoid underground press publisher talking. This all came out in court. It was documented. In fact the undercover agent with the local sheriff in Johnson County in cooperation with the local sheriff were responsible for a very unstable ex-con that was staying with us to get a gun. And in a rage, he ended up killing his girlfriend, who was a teaching assistant at the University of Iowa.

This ex-con was an undercover agent?

The Sheriff gave the murderer a gun, first test-firing it to insure a conviction after he used the weapon

"No, no. The undercover agent working with the sheriff was responsible for an ex-con getting a pistol. And the guy was at the time unstable. He was unstable. Everybody knew it. We knew it. And that's why we watched him very carefully. You know, we would keep people around him all the time. But things got out of hand and this other guy helped him get a gun. The undercover agent and the sheriff had even test-fired the gun so they had samples of the bullets to insure a conviction when the guy used the gun.

"So this ex-con ended up with a gun. Very unstable. A lot of details about it in the story I wrote for the PDI. And he killed her. He did time for it. And it was really a sad situation.

"And we were tested for drugs. One big front page picture shows a sheriff's deputy coming out of one of our sponsor's homes with two big garbage bags. And the headline was that it was all marijuana. Actually, in fact, the garbage bags only contained garbage. They didn't really find any pot. We had a little bit of pot found in a pocket of one guy, who wasn't an ex-con.

"But still in all it slows you down. You end up in court, hiring lawyers. And it's just, you know, it's just harassment. Well, all these people's names were included. And the publisher who had committed to Voices was afraid of libel. And you know, that's understandable. But even Bill Kunstler told his publisher that he'd studied the book, and he said there's nothing to worry about. All this stuff was second-hand. It had all been printed in underground newspapers before. So he was safe. But still he wouldn't do it. So, publisher after publisher after publisher heaped praise on the books, but refused to publish them.

"So there they were, on the shelf, and they weren't going to get published. So I decided I'll publish them. I rounded up some money and printed them, thinking that we would get some really good coverage, good reviews from the newspapers, you know. Because, you know, it'd been twenty-five years from the end of the Vietnam War. I figured, well, what the hell, the news media is gonna get over their, you know, their problem with the underground press.

"I'll tell you---you know, you've got enough experience to know what this is like. Here you have a two volume set of books, eight and a half by eleven. One of them six hundred and forty pages. And so, you know, to get those printed and shipped, that costs a lot of money. We had almost two hundred newspapers send for review copies. Only one of those newspapers printed a review. That was the LA Times---Sunday May 2, 1993---two full pages of praise. Gerald Nicosia, the Kerouac biographer (MEMORY BABE: A Critical Biography of Jack Kerouac) reviewed the books. All the rest of the scum just got the books for their personal libraries. They knew they weren't going to print anything about them.

"And that was a hurdle, boy, that was really tough to recover from. But, especially we weren't getting any publicity. And we didn't really have any money for advertising. I started using the internet very successfully---dealing directly with Reference Librarians. And then I went to the web. And slowly we started selling the books. We got them sold. In the process of selling them, small print publishers who'd been having problems getting books sold---getting books in front of the public asked:

"'Can we put our books up on your website?'

Anybody can put a book on the website, except a major publisher
like Houghton Mifflin or Simon and Shuster

And how many books do you have on your website?

"I'm not sure, Al. Never added a counter for that element and too busy to count 'em. But there's a lot of them there."

And you have a counter for visits?

"I have a counter for visitors. We get clean hits. As I said, we're getting ten to fifteen thousands hits from individuals a week. This past week it was down a little bit. But for the most part it stays up high. And then of course, you know, different things come up. For example, the Kerouac Controversy."

"You know, there's things that I feel pretty strongly about. Back a few years ago I became friends with Jan Kerouac, and it was a friendship by telephone because I never got down to Albuquerque while she was still living. But I met her because of a friendship that developed with Gerry Nicosia.

"And so I got to know Gerry, and through Gerry I got to know Jan. And getting to know her and the problems she faced as she was getting screwed out of royalties that were rightfully hers brought me into the controversy on her side. Her health was fragile and the money she desperately needed was kept from her by John Sampas. She was a gentle, gifted young woman. Her death has not changed how I feel about her and her crusade to save her dad's archives.

"The last things she asked me to do---and I talked to her shortly before she died---was to provide as much help and support for Gerry who had promised Jan he would continue her fight to recover her Dad's archives. Jan wanted her dad's archives safe in a library someplace. I promised her I'd do that. And, as you're aware, I spent a lot of time on that.

"As has Gerry---you know, there is considerable action in the courts right now. So that's where I am with it. And it's taking up more and more of my time, and becoming more and more difficult to maintain. But I'm kinda hanging in there. I'm so far behind in my work that I have to spend more time with the material that's sent to me on the web. Right now, there's probably 200 books waiting for me to put online. I've got to move them from the form on our web site, actually to the web. And it's more and more difficult keeping up with that work every day."

Joe Grant is another one of my heroes. How could I NOT make a big production out of introducing my link to his BookZen website and also out of introducing my serialization of his still-unpublished autobiographical book, Stop the Presses! I want to Get Off. The serialization starts in SECTION TWO of COLUMN FORTY-FIVE. As part of the serialization, Joe tells that whole other story about his sojourn behind federal bars and also begins to give you more clues as to why I consider Joe, obviously one of the brightest stars in our cyberspace universe, to be another one of my heroes.