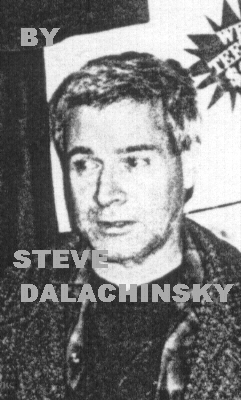 [Steve Dalachinsky was born in Brooklyn, New York in 1946. He says he has been writing poetry since before then. He says his great loves and influences are the Beats, Blake and music, particularly so-called "avant-garde" jazz. His chapbooks include OneThin Line, published by Pinched Nerves Press, and People/Places, published by The Beehive Press. His work has most recently appeared in Long Shot, Nomad Choir, Blue Beat Jacket, Connections, Big Hammer and N.Y. Arts Magazine. He has just completed a manuscript of his poems entitled The Final Night, which is comprised entirely of poems written while listening to the music of saxophonist Charles Gayle between 1987 and the present and which is scheduled to be published by Linear Arts Press sometime in 1999. He is co-editor of the anthology Play the Red. He has written several liner notes for musicians such as Gayle, Matthew Shipp, James "Blood" Ulmer, Anthony Braxton and Roy Campbell. Two key elements in his poetry are spontaneity and the idea of transformation rather than description, with a preference toward non-linear, non-narrative thought. He is currently working on a cd for Knitting Factory Works. He resides in Manhattan, where he has lived for the past 30 years.] tribute to Bob Kaufman (the shadows) i like her bush/& her
toosh
the way her metal shadow
twists against the wall
the way the white wall collaborates
with his white clothes
& forms a dark form
i like the way floor collaborates with flesh
beat & burnt maybe the way his shadow passes
right thru the metal
& ends up there on the wall
along with everything else
& i mean everything
nothing to forgive
his shadow doubles on the wall
like real estate
the way he makes the sound flutter thru his reed
from his heart thru his mouth
her shadow i like the way it rises out of his
comes detached & flutters flutters
with her body from her body
holy ceramic design
of shadow holes & rainbows
creating & recreating themselves
the way her shadow remerges with his knees
i like the way breasts & dick & wall sockets
keep occurring & re occuring

like the world
is a crossing
sometimes
a river
for which we
now us a
camera
to ferry our faces
across. ##

They talk about work
the men who have jobs
they discuss some aspect of work
some gossip
some Inside joke
some technical tour de force.


James Dean
in a gallery window
we talk about sleep. ##

i saw you
naked
showering in the rain
in front of the trailer -
the hippie tried to push some propaganda on us
but we preferred a bar of ivory soap.

dripping from the sky
we slosh thru mud
down to the lake
and wade bare ass
thru the lilies
and weeds.  ##

2. Fortune Obscured by Clouds
blue on your face
blue in your eyes
circling clouds upon the water
open In turquoise smoke rings
and heavy red dots
mysterious petal obscured by breath
pushing up/downward
stroked by the constant reminder of blood.      violet falls into blue into violent into calm
and your ear rings as vou sleep
shoulder wrapped red sweater
(blue-black-white with green)
and green
circling lilies
emerge from clouds
in the pinking of spring
to end
sienna-depth
autumned. ##