THE RIDE HOME: (Most Definitely Lost In Durango) 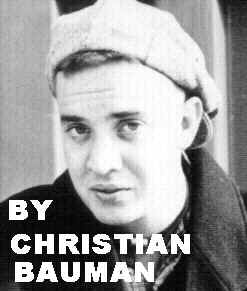 [Christian Bauman is a singer-songwriter who lives in Pipersville, Pennsylvania and who records for Black Potatoe Records. His email address is ducksquack@hotmail.com and his URL is http://wwwfolkweb.com/christianbauman.]

There were four of us eating in the booth at the truck stop, thirty minute reprieve given by the driver of the Greyhound:

"Thirty minutes and I pull out without you."

Four of us, gravitated together I guess because of age and we were all in the back of the bus and we all bitched about not being allowed to smoke on the bus. Two in the morning, the sodium arc lights turning the black snow into yellow piles arranged around the sides of the parking lot. Four of us, putting down fried eggs and bacon and Marlboros.

I was through, I was defeated. I felt wrung-out, like my soul had been sucked through my left nostril by some soul-straw attached to the lips of an unseen beast, sucked out and left with this vacuum of empty filling my body. Tired, through, and done. Going home, Interstate 80 across America. Four of us, who didn't know each other.

This guy sitting next to me, on the outside seat, was talking a lot. He was going somewhere he'd never been, he was twenty, I guess, and he'd been talking about stock cars with the Wisconsin farm boy sitting across the table from him. He liked to talk, and he liked to ask, and he wanted to know everyone's deal. He asked me about my deal, I told him I was just going home, that's all.

I told him I thought I was going home, but when I got there I decided that wasn't it after all, so I changed my mind, and now I was going home this way. He looked at me like a bug, and then moved on to Stock-Car-Boy over there.

This chick across the table from me, she drank Coke instead of coffee, and she looked up now and then, and she chain-smoked my cigarettes, but that was OK. I had spent almost all of my money on a carton to make sure I didn't run out. I think Stock-Car-Boy had a little crush on her. When she slid in to the booth he about jumped to get the seat next to her. Go get 'em, Stock-Car-Boy. Stock-Car-Boy didn't seem to mind answering Inquisitive-Boy's questions, and that kept him busy for awhile.

Finally, though, Inquisitive-Boy turns his attention to this chick, Karen she'd said, and asks what she's doing, like where you going, how far, what you doing? What, in other words, is your own personal deal? She doesn't even look up, just tells him flat she's going to Newark and she's going to give blow jobs for $20 a pop.

That stops him pretty good, but only for like 2 seconds. Stock-Car-Boy turns red and giggles, I'm pretty sure he's only like 18, then he tries to straighten his face when he thinks she might be serious, then he tries to look out of the corner of his eye to get some idea of what exactly she meant. He caught her rolling her eyes, so I guess he figures it's OK to giggle again, just that it only comes out like a little mouse squeak. Inquisitive-Boy isn't phased, he's like:

"Oh yeah? Yeah, OK. Hey, whatever your deal is, that's your deal, y'know? Yeah, I knew this chick from my high school, she went to New York to be a dancer or something, and I hear she's like in a whore house or something now, couldn't make it. But y'know, if that's your chosen line of work, y'know, there's nothing wrong with that."

She tells him to shut up.

I wonder what, exactly, is Inquisitive-Boy's deal. Then I decide I probably really don't care.

They beat
the living shit
out of him

Two hours later the driver pulls the bus to the side of the Turnpike. It's four in the morning, and it's so cold outside, it's so cold, and all of that old black snow on the ground, and the driver pulls the Greyhound to the side of the Turnpike and opens the door, all of that wind coming in, my body shakes wondering where in the hell did the heat go? He opens the door and these three guys take this little guy by the collar, they lift him right out of his seat, kicking, and they take him out the door to the side of the road, and they beat the living shit out of him.

It takes less than a minute, they go around with him, his face is such a fucking mess, he is without a doubt the most pathetic thing I've seen in my life, he's not even making much of a noise, just this high pitch almost wail, they fuck him up. My face pressed sideways against the tinted glass of the bus window, so cold, I'm sure I'm still sleeping, my eyes open watching this right beneath me.

He gets ditched chest first into that old black snow, and this one guy drives his boot into the little fella's side, and they all get back on the bus, the driver closes the door, and away we go.

This guy, he was Pakistani or something, I'm guessing. I don't remember why I thought that, but I remember thinking I was pretty sure he was Pakistani. The night before I'd been sitting where he was sitting, next to this woman who had three kids scattered around the bus, two boys and a girl. Her old man had put her and the kids on the bus in Sacramento, said he'd meet up with them at her Mom's house in Scranton sometime later in the year. She was OK, a little stupid, but she was putting a good face on things, y'know.

This other fella, he'd brought on a case of warm Bud in his overcoat, we'd been drinking it and offered her one. She said no, but later when her kids were sleeping she drank a few with us, and talked about her Mom and her husband and her boys and her little girl and how much her little girl looked like her sister who had died in a car accident like five years ago. She was putting a good face on things, and got a little silly with the beer in her, but it was good to see her smile.

She woke up, I guess, this next night, and thought she saw this guy, the one I thought was probably from Pakistan, put his hand on one of her boy's knees or thigh or something. I can imagine her, waking up all contorted like you do on a Greyhound, looking around half asleep through eyes that didn't see much better than mine had, pressed against the dark glass, but there was no glass, she was just looking around.

She said that he'd had his hand there and she'd seen his hand move up and down and she screamed and woke up these fellas sitting all around, half drunk, beat and tired and going home or going away but going somewhere they probably would rather not be at, going where someone had said there might be a job or money, or promised something, Christ there must be something good, why the hell else would you be on a goddamn Greyhound bus in the ass end of winter, woke them up with her screaming and this little foreign guy sitting there and they took him outside and they hurt him pretty bad.

And that's about all I have to say about the ride home. I said a lot before about the ride west, I said and wrote and even had a song or two, y'know. The ride back was just this, five days put into these two moments. Stock-Car-Boy never even woke up during this, same with Karen, both behind me in the last seat, slept through it or made out like they did, their arms around each other. Inquisitive-Boy woke up and saw it but didn't say a thing, and later, like 20 minutes later, back on the highway, the diesel low and pushing under the floor beneath us, he said:

"Well if I'da been up there I'd have done the same, y'know, that's ALL fucked up, fucking mooley pervert, I'd have fucked him up good, too, I'd have fucking stomped him."

I went into the little bathroom in the back and lit a cigarette and didn't come out until the pack was gone. When I opened the door the sun was coming through the tinted windows and we were somewhere in eastern Ohio. ##

CLICK HERE TO GET TO INDEX OF COLUMN FORTY-THREE