MOSTLY ABOUT THE BURBS 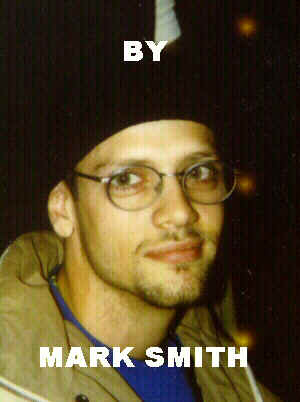 "Hands across America" was a big deal growing up. I guess it made people feel good. And when Space Shuttle Challenger became too much of a challenge, we planted a tree in the schoolyard. Let's see, that was around '85, right? The tree's probably big enough to play on by now. I was never heavy into music. And when I was, it was Run DMC or WHAM! and lyrics like, "One day when I was chillin in Kentucky Fried Chicken ... Mindin my business eating food and finger lickin. . ." and that kind of random-babble.

I didn't know nothing about Marvin Gaye, Mingus, Monk or Trane. Not even BB King, Louis Armstrong, Aretha Franklin or Dizzy were part of my world. I only knew Stevie through I Just Called to Say I Love You. And Jazz. . . Jazz was just corny and random shit like Mozart and Bach and all that. In fact, the closest I got to any of these musical masters was We Are the World. Come to think of it, I don't even think we had a stereo in the house when we were kids.

Only radio was dad's. And all that streamed out of it was the likes of Bob Grant or Newt now, Curtis Sleezebag and the rest of them Reagan-nazis.

Sometimes a little country music would make its way into the kitchen area. Not too often,

Dad would listen
to sports
on the radio all day

though. I guess even that was too real for mom and dad. Even they was talkin bout real life: smokin weed just to deal and trying not to deal with cops . . . or landlords . . . or the boss.

When it wasn't a talk show frequency, it was sports. If there was one thing happening in the burbs, it was sports. Always some season: baseball, soccer, hoops. We didn't call it that. Just "basketball." I never cared much for it. I was always good on D, but never had any skills handlin the ball. And dad would listen all day . . . just him and that radio. Sometimes you didn't know if he was sleepin or not. He was in the zone---him and his radio.

We kids were wild. And fought a lot too. I think about it now and it's hard to figure it out: What the hell were we always fighting about? Probably somebody's stuff. "She got more than me" and all that. It's early you learn to hoard what's yours or anything you could get your hands on.

I suppose it was usually mom that handled that shit. She was the diplomat. Always trying to keep things chill---never knowing how she contributed to the hassle in the first place. Dad was just called in to enforce. He was the muscle. You know the spankings and all that. Sometimes, I'd find myself in a tiny crawl space in the attic next to all the old cribs and mattresses and Christmas ornaments. Or sometimes tucked into the top shelf of the bathroom closet. Just trying to get away from that inevitable smack on the ass. Just buying time . . . till they calm down. Cause you know dad just wants to get back to his game.

It was usually the Mets. See, it was the Giants originally. But when they jetted for the West Coast (something I think of doing every now and then) all that was left was the Yanks and Brooklyn. Or maybe Brooklyn went west too by then. Either way, anyone that knows, knows that you can't go from rooting for the Giants to rooting for the Yanks. You hate the Yanks! Sometimes more than you like the Giants. Anyway, the Mets came along and even won a few games at first, so Mets it was. I don't know why I was never a Mets fan. I mean with them saving me from them spankings and all. Maybe it was just part of the whole rivalry thing. Or from following an older brother's lead.

When I got older, I wouldn't hide upstairs as much. I'd be out. Had some friends around town. Mostly working class kids; probably the most working class kids in town. We hooked up for no other reason but that they lived close to me. But they were cool too. Had a lot more fun with em than I would have with anyone else. We got into all sorts of shit. Nothing really nasty, but as bad as it got with kids in the burbs. Kicking garbage cans over, ring and run and all that kinda stuff. One time this old guy got me. He had a little help though. Some other guy saw me ring his bell and when the old guy actually tried to run after me---and he never would have caught me---the other guy (probably as old then as I am now), he ran and grabbed me. I was so scared and confused by the whole thing I didn't know what the hell to do. Should have probably just run like hell. I guess I choked.

All in all, everything seemed pretty whacked growing up in the Burbs. It was always so empty, so sugar coated---one big "front". Always "there's nothing to do. This town sucks." And when we were older, "Let's go to the city" became the refrain. See, the city was alive. It was hoppin. We could see it, hear it on TV and when we drove past. But when we got there, we were always just tourists; outsiders. We'd goof on the Asians and their cameras, but we were no different. You'd walk around, maybe go to a club or something, but mostly, just watch. It was never like the city was ours; like we belonged. I mean when we were kids, it was always "Alright kids, roll up your windows, lock your doors." We're almost there. We'd mock it . . . and still do. "Roll up your windows and lock your doors," we'd echo. But we didn't really understand what for. I mean, I never saw no one get robbed. No one I knew ever got robbed. I guess it was the news that scared the shit out of them. They always got the Star-Ledger, if you know what I mean. Or maybe it was that they knew they were going into someone else's place; and they weren't welcome.

You know, they lived through the "Riots." We used to hear stories about the Newark "Riots." In fifth grade, our teacher told us, "When I was a kid, we'd ride our bikes to Newark. It was a Great place to go. But not now. They destroyed it all. Now we just go to the mall to shop." Yes the mall. The heart of suburban culture. Of course, to us, it was just another place to get in trouble cause when you're kids, there ain't nothing to do but be kids.

But about the uprisings---I call them uprisings now that I got a little bit of education---about the uprisings in Newark, did you know that the then Mayor of Nutley made a public statement that "all residents should arm themselves and get ready for the negro riot to spread to here." And not to join it either. I mean talk about a guilty conscience. What's wrong Mayor? You think you got something people want? I suppose when you're home to the U.S. headquarters of a multi-billion dollar international pharmaceutical company like Hoffman la Roche, you know there's something funny---or not so funny---going on. I would have loved to ask, "Mr. Mayor, have you ever even talked to a Black person, Mr. Mayor?" I mean, this is a town where you just can't get a house in most parts if you ain't white, or close to it, whether you got money or not. Think I'm lying? Check out the Yanticaw district. There ain't but one or two Black families living there and both of em got white fathers. Some of the ignorant kids would call em zebra. I used to

Yanticaw was Wacitani spelled backwards; the Wacitani were the indigenous people who lived there before the burbs were born

think the kid that thought that one up was clever. You know: zebra---half black, half white. I didn't know that it wasn't nothing new and that it's probably something he heard his parents say.

But Yanticaw district. That was my school's name. We took pride in it and were mildly interested when we learned that the name came from the word Wacitani spelled backwards. See, the Wacitani were the Indigenous people who lived there before the burbs were born. They never did tell us what happened to the Wacitani. But now I know. I know how they were chewed up and spit out along with their history so that all that remains is their name misspelled and backwards. I mean why name the school Yanticaw? What was wrong with Wacitani?

So that's a taste of Nutley where all's not lost. I mean, hell, it's where I'm from. Although a friend did recently tell me that in a Village Voice article, Nutley was named as a recruiting ground for the Klan or some Klan-ish clique.

I'm glad I escaped---I mean a mental escape, not physical. It's been five years now since I said "Let's go to the city. There's something happening there." And I was right. The city is the heart of it all; the off-spring of revolutionary change, and the birthplace for change. It sure as hell's changed me. You know, Nutley, if you ain't afraid to look and you know the right questions to ask, you'll learn more from talking to that woman on the corner than from all of your years in those backwards schools where you learn nothing but to enjoy---or at a bare minimum endure---wage slavery.

So, if you ain't bought yet. I mean if you still got some life in you, try something. Try anything. Throw a party; start an underground newspaper in the high school; do your next oral report on the Wacatani Indians or Malcolm X---and be sure to explain how the democratic fight in Black communities is keeping your parents salaries so high; join a band or have one play in your back yard this summer---and when they tell you to turn it down, invite them over to boogie down with you if they still know how to move. Whatever you do, trust how you feel. It's not your imagination: suburban culture really does suck! It's a for profit, rehearsed rip-off of what's happenin in the city, and other oppressed communities for that matter; even white ones. Yes, even white ones, cause they don't care whose culture they destroy as long as they make a buck. Garth Brooks ain't any more Country than Kenny G's Jazz or Vanilla Ice's hip hop.

And if you don't know what to do or you can't start something yourself, come check out the city. Work on an independent political campaign like Ras Baraka's for City Council in bad old Newark. Or just wear a button to school, there's nothing to be afraid of---unless you make it a habit of getting in the way of people trying to live their lives.

So peace out Nutley. But I'll be back. Cause I know what it's like. I was there.