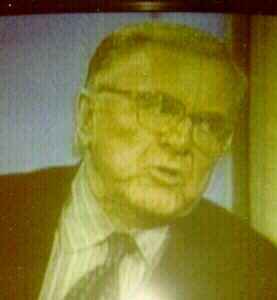 I told the woman sitting next to me at the Opera the other night that John McLaughlin called the President of the United States "loathsome."

"Well," she said, "I think the President IS loathsome."

What else should I have expected from a snobbish rich bitch with blue hair sitting next to me at the opera? Snobbish rich bitches that vote Republican don't go to nursing homes when their hair turns blue. They go to the opera. As for McLaughlin, I'd be ready to call him loathsome, except he's such a joke. A real bellylaugh of a joke. He's certainly the biggest ha-ha you can find on New York's Sunday morning TV.

I call him McLaugh. He's like a caricature of himself, a caricature right out of the comic strips, a jellyjowled Archie Bunker playing a pompous professor who exudes arrogance in all directions as he savors his own words like ice cream while his head is firmly entrenched up his asshole. How could he NOT be unconscious of the fool he makes of himself?

The McLaughlin Group is a well-paid panel weighted heavily with neo-fascist spear-carriers posing as journalists. When Pulitzer Prize-winning Clarence Chase isn't on the panel, Newsweek's Eleanor Clift, in her capacity as a woman, a Democrat and a Clinton supporter, serves as the house blacksheep. Chief neo-fascist Pat Buchanan usually leads the stampede to interrupt Eleanor every time she's got a good point to make. When she keeps trying to make her point, McLaff and his right-wing team of naysayers just drown her out. Like Iranian fundamentalists, totalitarians never want to hear any kind of dissent. And John McLaff is the Ayatollah.

Although The McLaughlin Group gives the feeling that its members are all quite collegial in their off-camera relationships, McLaff keeps going out of his way to remind everyone that he's the boss. He delights in a pompous ritual of claiming droite de seigneur to one-up everybody. Oh, yes, he always makes sure he gets the last word.

"On a range of one to ten, with one meaning zero probability and ten signifying metaphysical certitude, what do you believe are the chances that Monica Lewinsky swallowed after the President ejaculated into her mouth?"

Of course McLaugh is much too much a hypocritical, jellyjowled, Victorian prude to ask that particular question, but I'm just trying to give you an idea of how McLaugh expresses his authoritarianism as if his were the word of God. On TV, Jellyjowls often lets the discussions he leads disintegrate into everybody trying to shout everybody else down, although it's obviously Jellyjowls, the voice from up high, who ends up shouting all the others down. He sits changing poses like a pompous academic don imagining himself being photographed for Vanity Fair as he presides in judgment over the judgments of his panel, telling its members whether their pronouncements are right or wrong. He sometimes even marks them, like an elementary school teacher. Yes, I call him McLaugh because he is a laugh. McLaugh, McLaff, I watch his program every Sunday.

I certainly watched his program at 10 A.M. on WNBC-TV's Channel 4 November 1, the Sunday before Election Day. The program is sponsored by GE, the corporation that

manufactures the 100-watt "Soft White" bulbs screwed into the desk lamps illuminating my bedroom, which also serves as my office. General Electric is the corporation that sponsored our somnolent former President, Alzheimer's candidate Ronald Reagan, into the Oval Office, where he told lies for which he was never impeached. GE is just the kind of right-wing corporation you'd expect to anoint an autocrat like Jellyjowls to stardom among TV's Sunday Morning public affairs shows.

So, it's Sunday morning, November 1 and Jellyjowls, assuming the voice of a divinity from above, sonorously intones:

"The U.S. House of Representatives is made up of 435 members. Republicans number 228; Democrats, 206; independent, one. Question: How many seats will the Republicans pick up, Pat Buchanan?"

Immediately, we see the one-time ultra right-wing presidential candidate beaming with smugness and amusement as he says:

"Buchanan says 12," Jellyjowls harrumps. "Eleanor Clift?" And he turns toward Eleanor, who, perhaps misappropriately, is seated to his right.

"Average pickup during a midseason election like this for the party out of power is generally 26 seats," Eleanor dryly responds. "The Republicans are going to do probably under 10; I'm picking six---that's a victory for Democrats."

Jellyjowls breaks into harrumphs of laughter. "You see," he says, "where she's setting the ball?"

"Twenty-six, at the outer limits," pontificates Jellyjowls authoritatively. "Of any arithmetic on---"

"Well, I give Gingrich 17." interrupts Eleanor, standing her ground.

"The reason that's the case," pipes up Tony, "is because Clinton lost his six-year election in

this first---the election in '94---when Republicans picked up 52 seats and took a lot off the table. I'm predicting very conservatively a seven-seat pick-up."

"Blankley says seven," says Jellyjowls. Playing schoolmarm, he turns toward Michael Barone, another right-rooting panel member who writes for U. S. News and World Report. "What do you say, Michael?"

Like the star pupil getting his first chance to shine, Michael faces the camera and says:

"I say eight seats after counting it district by district, and I think if the Democrats keep having victories like Eleanor, they'll disappear as a party around 2028."

Jellyjowls cracks a hint of a smile and then gets pontifical again: "Barone says eight seats, McLaughlin says 13. I'm not a wimp-out like you, Buchanan."

"On your screen you can see our individual projections," Jellyjowls says as the projections appear on the tube. "See it? Now, as a group, that is, collectively, we predict a net Republican House gain of nine seats."

The following Sunday, I was to be at my daughter's house in Van Nuys, California. Ever since the election results came in that Tuesday night of November 3, I'd been looking forward toward the next McLaughlin Group show so I could watch Jellyjowls eat crow. By Saturday, I was in Van Nuys, but when I couldn't find The McLaughlin Group in the Sunday morning listings, I phoned NBC's L.A. station to learn when I could see the show. In L.A., The McLaughlin Group is broadcast at 6:30 p.m. Saturday. I watched it and then at dinner later that night,  I was introduced to a friend of my daughter who happened to be another Jellyjowls fan. He, too, had been looking forward to watching Jellyjowls eat crow. Across the nation, I'll bet there were a lot of us.

But of course, Jellyjowls didn't eat crow because his mouth was too busy, as usual, spewing out that ice cream he licks while his head is stuck up his asshole.

Not once during his program immediately after Election Day did Jellyjowls bother to acknowledge that the Republicans had gotten their asses whipped, that they had lost five Congressional seats and that he and his panel had been all wrong. Instead, he devoted that program to the Iraqi crisis, something bequeathed to the world by Waffle King Bush and Black Republican Powell, both of whom refused to take out Saddam Hussein when they had the perfect opportunity.

As always, Jellyjowls also took the occasion for a couple of cheap shots against William Jefferson Clinton, quoting naysayers in the military who had attacked their commander-in-chief, something I suppose Jellyjowls is obligated to do to satisfy his base of Christian Far Right Republicans and his neo-fascist sponsor, manufacturer of my 100-watt bulbs. Who else makes bulbs that I can buy?

Then, the following week, in his next program, Jellyjowls accused historians of "besmirching" Thomas Jefferson by saying DNA proved founding father Tom had fathered a family born to his black slave, Sally Hemmings. What a bad rap against founding father Tom! He actually fucked a black woman? Jellyjowls then took great pains, like OJ's dream team, to dispute DNA evidence as unreliable. Would you buy a used car from this man? How can I consider him loathsome when he makes me laugh so hard? ##