A THANK-YOU NOTE FOR THE RAIN 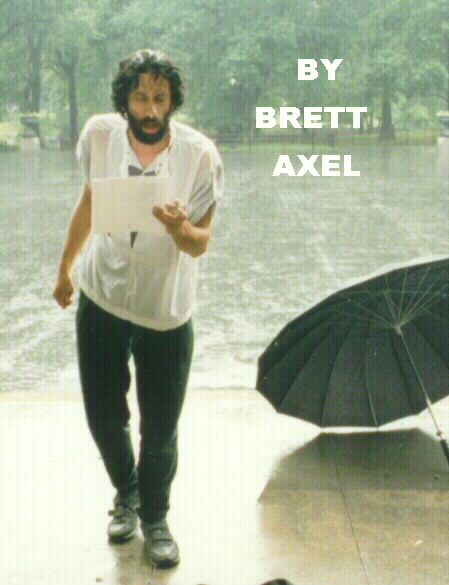 When I told Al Aronowitz I would write something up for him about the Allen Ginsberg Memorial at the Band Shell (way back in June) I didn't think it would be a problem. I am a writer, if nothing else,

I can string words together and make them sound fairly decent. But here we are in October and the simple project remains a post-it note that has been hanging off of my hard drive so long the sticky, while gelatinous, no longer sticks.

What is so difficult about this assignment is that, if there are words to describe last June 12th, I am not a talented enough writer to find them. It was nothing short of magic and along with the births of my sons, is on a very short list of events precious enough to make all of my life worthwhile.

The day began for me the night before, traveling into New York City with Stephanie Lucci, a talented young poet and visual artist from Poughkeepsie and spending the evening with Professor Steve Cannon and Amy Ouzoonian at A Gathering of the Tribes' gallery on the Lower East Side. We talked poetry and shared stories about Allen all night then slept of the gallery floor. In the morning, it was raining.

The rain didn't bother me, but Amy, having a brand new, expensive dress for the occasion was a little perturbed. I have fond memories of being drenched at Woodstock in '69, so I was getting into it.

"So, we read in the rain, big deal." We ate and prepared ourselves for the day, walking out the door as Kyrce Swenson called to us to read an E-mail from Al. It said the event was rained out and officially canceled. I called Al right away and started screaming at him:

"It's not even rain, it's a drizzle, a mist for chrissake!"

I think I hung up on him then, muttered down the stairs while Stephanie and Amy followed.

"Where are you going?" Stephanie asked.

"We came here to do a reading in Central Park, for Allen, remember? Any of this ringing a bell?" I snapped at her.

"But it was canceled, Brett, do you remember that part?" she reminded me.

"Well, I'm uncanceling it!" I yelled & started waving for a cab. I think the two of them came as much to protect me from myself as anything else, but I was not out of control, I was having a very controlled emotional outburst.

Being an occasionally starving poet with an occasionally starving family, of course, I brought copies of my chapbook in the hopes of selling a few in the crowd. When we got out of the taxi at Central Park, it was no longer raining, it was pouring. The short trip through the park and to the Bandshell was more than sufficient to get us drenched. Amy's expensive

There were
about 75 persons
at the Bandshell

Filene's dress was clinging to her scrawny legs like toilet paper to a slug, the color dripping into her shoes. As much fun as I thought I'd be having, I was wet and cold and starting to get a headache from all of the screaming I had been doing.

We turned a bend, bringing the Bandshell into our sight and discovered that we were not alone. There were at least 75 people trying to keep out of the rain, unsuccessfully as the wind periodically whipped the rain into the Band Shell.

We climbed in, not knowing if any of the people there knew anything about the event that has supposed to have been taking place there. They were somber, like the crowd standing outside the Dakota the day after John Lennon died. I was there for that too, another fucking miserable day in the rain.

It didn't take long to realize that everyone was there for the same reason. They had come, some from halfway across the planet, to pay tribute to Allen Ginsberg, a poet, a visionary, an icon, an idol, a symbol, and a friend. It took very little to get a poetry reading going. We had no official order but as if Allen himself was choreographing it from wherever Buddhist queers go after they die, the reading flowed from one poet to the next without interruption. A seamless stream of memories, metaphors, and touching moments. When most of us had run out of poems to read or things to say, Lamont Steptoe was always willing to get back up and read for as long as it took for one of us to dig out a poem or to write one. When even Lamont was losing steam, Danny Shot, Antler, Pedro Pietri and Al Aronowitz himself showed up with new energy. My books were wet beyond repair, but that didn't keep me from being able to give them out to anyone who wanted one, and I was able to get a book from anyone I wanted a book from. No one even thought about money. It was as if money didn't exist.

I was reading Ron Whitehead's chapbook aloud in the taxi back to the Tribes gallery after it was over. As it turned out, the Tribute to Allen Ginsberg at the Bandshell in Central Park on June 12, 1998, was not a publicity opportunity. It was not exposure and it was not profitable for anyone. And this made the event a true tribute. I thank Allen for his poetry, I thank him for his inspiration, for the paths he beat down for us, for the community he drew together and, most of all, for giving us the rain. ##

CLICK HERE TO GET TO INDEX OF COLUMN FORTY