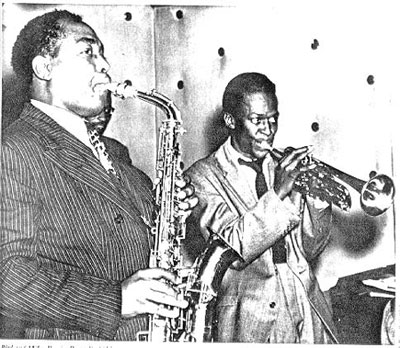 Christmas Eve, 1948, and the band arrived early. It was Charlie Parker's opening night at the Argyle Club on Chicago's North Side and the band members came by El, carrying their instruments down the long flight of stairs from the elevated tracks to the street while the icy whip of Chicago's notorious winter lashed at their coats, which, of course, were too cool for this city's brand of winter frigidity. Cool as in cool jazz. Cool as in the Miles Davis definition of cool. These dudes were always short on bread but long on style, and they cursed the glacial sting of the Chicago wind that roared down from Canada across Lake Michigan as it reminded them that just because clothes looked hip didn't make them warm. There were four of them, drummer Max Roach, Tommy Potter on bass, Duke Jordan on piano and Miles Davis on trumpet. Miles was the one who eventually told me this story more than a quarter of a century afterwards. I needed to write something about Christmas for my Pop Scene column in the New York Post and I asked Myles to tell me how he'd spent the weirdest Christmas Eve he could remember. Miles told me that when the band got to the Argyle club, Bird wasn't there. Bird was late. Damn that Bird! He was an hour and fifteen minutes late.

Inside the club, the customers kept tumbling in until the place was packed. The band set up and waited while trying not to be intimidated by the impatience of the club owner, who kept pacing with his face frozen in a scowl. Miles thought the club owner looked like Scrooge. For Miles, the club owner's frowns darkened the glitter of the club's gay Christmas decorations. The club owner kept walking around making sure the band heard him asking himself why he had booked Charlie Parker in the first place. Miles wondered why, too. Chicago had never heard anything like the kind of far-out things Bird had been playing lately. Bird's music had become so inaccessible that Miles hardly ever finished playing a set without wondering how come the band hadn't been booed off the bandstand. Still, the club was jammed. Just look at this crowd that had come out to hear Bird on a Christmas Eve! The crowd waited expectantly. The crowd waited and waited and waited.

"Playin' with Bird was like a school and a half for me!" Miles remembered. "Bird used to tell me, 'Never take Seconals and play chromatics.' I was twenty-two years old when I was playin' with Bird."

As the crowd grew more impatient and the club owner's scowl grew darker, Miles slipped into the phone booth to call some relatives he had in Chicago. Miles, a dentist's son, came from a family that belonged to the Black Elite. Miles was scraping the bottom of the barrel and coming up with splinters under his fingernails, but his relatives were rich. They owned property in Chicago.

"What're you doing in Chicago?" they asked. "The last we heard, you were supposed to be going to some fancy music conservatory in New York."

Twenty-two years later, Miles confessed to me that he'd always been a worrier. The main reason he'd telephoned his relatives was that playing with Bird left him feeling that he might have to hit on those relatives for train fare back to New York. As the music director of Bird's quintet, Miles had the responsibility of rehearsing the group in Charlie's absence, which seemed to have become almost all the time. Twenty-two years later, Miles confessed to me that he had a certain lack of confidence in his ability to follow Bird, who complained throughout his entire career that he never could find any sidemen who could follow him. For Miles, playing behind Charlie Parker was complicated to begin with but the higher the Bird flew, the more complicated following him got.

Miles felt his hair turning white by the time Bird floated into the Argyle Club. Arriving an hour and fifteen minutes after the show was supposed to start, Bird was so stoned that they had to point him toward the bandstand. He got on, opened up with a fast number and promptly nodded out onstage with his horn still in his hands. Seconal, a barbiturate, was widely prescribed as a sleeping pill in those days. To take a Seconal was to achieve instant inebriation. The Bird was flying again.

Miles remembered that not only was it the weirdest Christmas Eve he ever experienced but it was also the weirdest set he ever played. The band would be playing a medley of Embraceable You and right in the middle of it, a nodded-out Charlie would wake up and start blowing Cherokee . Then, somehow, Cherokee would turn into Donna Lee . At another juncture, Miles would finish a solo and, finding that Bird had slept right through his cue, would then play four bars more. On drums, Max Roach would play another four bars. They'd play four bars, they'd play eight bars, they'd play twelve bars, and Bird would still be nodded out on his feet with his horn still in his hands. At one point, Miles let Max go on for thirty-two bars as loud as he could in an effort to rouse Bird. At another point, Miles blew eight bars of trumpet right into Bird's ear. But it wasn't the loudness that succeeded in rousing Charlie. It was the silences. From deep in his slumber, Bird would hear the embarrassing quiet, and that's what would trigger him to nod back in, blowing something in the same key as the rest of the band, although not necessarily the same tune that the rest of the band was playing. If the band would be playing a tune in F, Bird apparently wouldn't hear the tune, he'd just hear the F. Consequently, he'd immediately start playing some other tune in F. Behind the drums, Max Roach kept cracking up and hollering about how great it was. Miles remembered feeling as if everyone were looking at him.

Miles guessed that the predominantly white audience from Chicago's predominantly white North Side must've thought that either the group was nuts or that Bird was in some deep-down trance. When the set was over, Charlie immediately disappeared, but the band members finally found him asleep in the phone booth, where he'd peed in his pants. The Scrooge-faced club owner fired the quintet that night. Like a self-fulfilling prophecy, Miles' worries were realized; he would have to call his relatives for train fare, after all.

The next morning, Miles and the other band members went down to the union office to demand their money.

When Bird arrived, he not only started hollering, he also pounded on the union president's desk.

"See!" Max Roach said, "I told you that Bird'll take care of this!"

"Get the fuck outta here!"

Miles called up his relatives and got the train fare back to New York. He said he never did learn what had happened to Bird on that Christmas Eve before Bird got to the Argyle Club. But one night three years later, during some gig somewhere, Bird turned to Miles angrily on the bandstand and demanded: