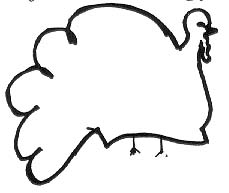 MY MA AND PA: A THANKSGIVING STORY

I'll start with my dear departed immigrant mother. She never learned too much English and I never learned too much Yiddish. For instance, she would always use the Yiddish word, "guppel," instead of the English "fork," because, with my mother's immigrant accent, "fork" would always came out of her mouth sounding like an embarrassingly dirty word. And, if she were ever tempted to use that embarrassingly dirty word, she instead would always use an adjective which was much more polite and acceptable in sort of the same way Hollywood used to censor itself.

For instance, in the classic film, "Treasure of the Sierra Madre," Humphrey Bogart asks the Mexican bandits posing as cops to show their badges. "Badges? Badges?" the bandits reply. But instead of saying, "We don't need no forking badges," which is closer to what one would expect real-life, down-to-earth bandits to say, the bandits in the movie say, "We don't need no stinking badges." "Stinking" was another word my mother never used. She used the Yiddish "fahrshtunkeneh" instead. That was a word I could not only understand but I could also smell.

When my mother turned up her nose at something, she called it "fahrshtunkeneh ." That was the word she used to describe the badge shown by the marshall who'd come to repossess my Pa's Model A Ford truck. One of my earliest memories is of her weeping hysterically as she pleaded with and then screamed at and then pounded her fists on that marshall. Born the year the stock market crashed. I was how old then? Two? Three? I witnessed this scene in the back yard behind the butcher shop which my Ma and Pa operated on Colfax Avenue in Roselle Park, New Jersey. Ours was the only Jewish family in a neighborhood where even Archie Bunker would have needed two more Ks in his name to be recognized as a bona fide bigot. We were surrounded by Archie Hitlers and Adolph Bunkkkers.

Without the truck, my Ma and Pa soon lost the butcher shop and were forced to flee with me and my three big sisters to the neighboring municipality, Roselle, where they found another flat near my grandfather's butcher shop, located in what was then called NigJewtown, the ghetto tucked away at the opposite end of the borough in Downtown Roselle. Separated from Linden on that side of the burgh by St. George Avenue, Roselle at its Uptown side was separated from Roselle Park by the tracks of the old New Jersey Central Railroad, now largely dismantled, which then carried stockbrokers from wealthier suburban towns like Westfield to the ferry slips of Jersey City. From there, it was a ferry voyage across the Hudson for the morning walk to Wall Street. Roselle and Roselle Park are still known as the "Twin Boroughs." 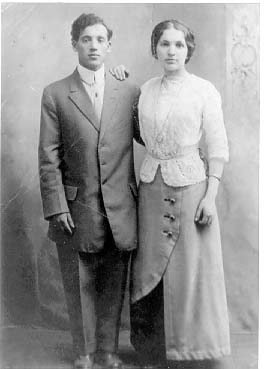 MY MA AND PA

My Ma and Pa needed a few bucks fast and somehow they learned that a certain Farmer Smith had some chickens he wanted to get rid of cheap. There were already a lot of chicken markets in the neighborhood and my Ma and Pa happened to stumble across a broken chicken crate which had been discarded in a nearby field. Repairing the broken chicken crate with hanger wire, my Ma and Pa threw it into the rumble seat of a coupe they borrowed from one of my father's brothers. Then they borrowed some money from my grandfather, piled little me into the coupe with them and drove out to the neatly kept hen houses of Farmer Smith's poultry farm on River Road on the way to Potter's Crossing, amid the greenery of what was then Clark Township's eminently pastoral New Jersey countryside but what has become a monotony of boxlike one-family homes on curving streets laid out by real estate speculators working in collaboration with builders and bulldozers.

I come from a family of butchers. Another of my father's brothers, Uncle Gilbert, kept his slaughterhouse truck in a garage attached to my grandfather's butcher shop on Rivington Street in Roselle, just around the corner from St. George Avenue, also known as the Lincoln Highway or Route 27. It was to this garage that my Ma and Pa brought their crate full of Farmer Smith's white leghorn culls. Inside the garage, they sold the culls right out of the chicken crate, using the facilities of my uncle's garage and my grandpa's butcher shop to slaughter, pluck and dress the chickens for cooking. The garage and he butcher shop had connecting doors. This was during the Depression-poor '30s and word of the bargain price of the chickens quickly spread through the mixed black and immigrant neighborhood. Within an hour or so, the entire crate was sold out. My Ma and Pa now had almost double the cash my Grandpa had lent them.

One of my Ma's friends came up with a second broken chicken crate she'd found rotting in a field in Linden, on the other side of St. George Avenue. All the action seemed to be on the other side of St. George Avenue in those days. Fixing the second crate with some more hanger wire, my Ma and Pa put it into the rumble seat along with the crate they'd just emptied. Then, they again piled me in between them and, with their bundle of cash, made a second trip to Farmer Smith's farm, finally returning to my uncle's garage with two crates loaded with white leghorn culls.

Eventually, my uncle's garage became the site of the M. A. Poultry Market, where, eventually, I got my turn to grow up butchering chickens and dressing them on a chopping block. As a five-year-old, I was jealous of my three big sisters, all of whom grew up working in the chicken market before me. Impatient because I was too small for what I thought was too long, I had to wait my turn,. Eventually, my Papa replaced his repossessed Model A with a newer vehicle, a '39 International, a panel truck with "M.A. Poultry Market" lettered on the doors. M.A. Those were my Pa's initials. He was 52 when he died. I was 15.

My Pa had ulcers that turned into cancer. He didn't get sick until after we moved into a house right next door to the chicken market. By then, I was already in school, the Abraham Lincoln Elementary School on Warren Street. My first day in Kindergarten, I peed in my pants. I can still see the puddle beneath my desk. They had to call one of my big sisters out of class to take me home. The next day, I was promoted into the first grade and from then on I thought the way to get promoted was to pee in your pants. It took me maybe a few years to become persuaded that the real reason I'd been promoted into the first grade actually was to resolve an administrator's confusion over whether to put me a year ahead or a year behind because I was born in May. Still, as a kid, I thought I was a genius. After all, I was so smart, I had skipped kindergarten.

This was in the days when the iceman had to cometh. There were no home freezers then. There were no supermarkets, no frozen dinners and no Frank Perdues. The M.A. Poultry Market flourished in a neighborhood which supported five live chicken markets within three blocks, with most of them on the other side of St. George Avenue in Linden. For chicken markets, Saturday nights were the busiest but not as busy as the Thanksgiving season. When Thanksgiving came around, my Ma and Pa had to get out the big coops that were stored in the back room of the chicken market. The big coops were for transporting turkeys, which, of course, were too large to fit into the regular wooden crates which accommodated the much smaller chickens.

"Ma, we own a chicken market right next door with all the turkeys in the world in it. How come we don't have our own turkey for Thanksgiving?"

And my Ma would look at me in surprise and point to the meat loaf and say:

I knew what a turkey looked like. But at the age of four or five, I couldn't be sure. Besides, I knew my own mother wouldn't lie to me, would she? Year after year, on Thanksgiving Day, my mother would bake meat loaf. I'd ask her how come there was no turkey and she'd point to the meat loaf and she'd say:

And I'd be disappointed but I was sure that my own mother wouldn't lie to me. I forget how old I got to be before my mother stopped telling me that meat loaf was turkey. Years later, when she was already in an old-age home and flirting with senility, I asked her why she had lied to me.

"A mother must tell her children whatever she must tell them!" she insisted in righteous Yiddish. At least, it sounded righteous in Yiddish.

That certainly wasn't the first straight answer that I never got and it certainly wasn't and won't be the last. Not until some fifty years after the fact, when I first sat down to think about writing this story, did I figure out that the reason my mother baked meat loaf on Thanksgiving was because the last thing she wanted to deal with on Thanksgiving Day was another turkey. Only, she would have said another "fahrshtunkeneh" turkey!

And that was how I also figured out that I was born so slow that it took me fifty years to figure out how slow I was born.  ##