A PART OF THE BEATLES' MAGIC

It was the marijuana which solidified my friendship with Derek Taylor. As the man who had turned him onto the weed, I commanded a certain respect from Derek, just as poets Michael McClure and Joanne Kyger plus painter Robert Lavigne---the persons who gave me my first joint---still command a certain respect from me. In the beginning, you can't help but look upon the person who turned you on as an experienced old-timer, an expert who can tell you much more about the ins and outs and ups and downs of THC and the weed world. Plus you can't help but feel a certain gratitude toward that person for having given you a key to satori and having opened the door for you to an expanding universe. By the last time I saw Derek some years ago, he had turned into as much of a pothead as I've ever been.

As one who lives in a more technologically advanced age than William Shakespeare, I look upon life as a movie rather than as a stage on which we strut and fret our hour. Derek Taylor played one of the major characters in what will have been my 60 minutes. Now that Derek's hour has ended, I feel privileged to have strutted and fretted with him. God, the Fates, chance and whatever it was all conspired to choose exactly the right guy to play Derek in my movie.

Handsome, slim, graceful and charming, Derek made all the right moves, said all the right words and always said them in the right tone of voice to play his role. I, for one, recognized Derek as a great seducer. To meet him was to be immediately disarmed, if not just thrown on the bed and raped. But raped in a pleasurable way which you couldn't help enjoying. Because, as press officer for the Beatles, the suave and charming Derek was not merely their grandiloquent spokesman, he was part of their magic.

Yes, although Derek never went on the stage with John, Paul, George and Ringo, he was one of the stars of their show. I remember Derek once boasting at an Apple Records directors' meeting at New York's Plaza Hotel that he had three balls. Indeed, Derek was one very ballsy guy. I remember another time, when Derek was unleashing a torrent of words in his usual manner while we were sharing a joint during a walk on a narrow, busy street in the center of London near the Apple Records offices. A little old lady interrupted him to ask where the bus stopped or something like that. "Fuck off!" Derek calmly told her and, pausing only to take another hit, resumed his conversation as we strolled on.

Derek is another one who, some years back when I was overcome by cocaine craziness, got to a point at which he said he didn't want anything more to do with me, telling me not to write him any more letters until I had joined Alcoholics Anonymous. Or was it Narcotics

Alcohol was Derek's devil
just as cocaine
became mine.

Anonymous? I, of course, have never had the kind of drinking problem that afflicted the Beatles and their magical crew. I've really never had a drinking problem at all. When the Fab Four first came to America in 1964, I tried but was unable to keep up with their elbow-bending. In his memoir of the Apple years, The Longest Cocktail Party, Richard DiLello has adequately described the open bar, the "other accommodations," and the circuslike atmosphere over which Derek presided at the Beatles' record company headquarters. Even after surrendering his consciousness to the "higher power" which AA venerates, Derek continued to smoke pot and snort cocaine. Alcohol was Derek's devil just as cocaine became mine.

"There comes a point where either you go crazy or you die or else you join Alcoholics Anonymous," he explained, telling me about his particular devil one night. "AA becomes your only alternative. There is no other alternative."

It's true that AA has saved the lives of many that I love, including Derek, whose life was saved for at least another decade or more. He got to be 65 before the cancer did him in. Now I never will be able to achieve my ambition of fully restoring the friendship Derek and I once shared. I had wanted to make up to him whatever gaffe I had committed in my cocaine craziness that drove him to tell me not to write him any more. He told me not to, but of course I did, hoping every time for a reply. Finally, for Christmas, 1996, I received a card from Derek with a few words scrawled on it:

Sorry to be late responding; I am a poor correspondent these days but in other respects I am making good progress with cancer, as I hope are you with your bodily challenges. All a great surprise. I expected to sail on to 85. All's well here; will write more, but very good wishes, meanwhile. Happy Holidays to Al from Joan and Derek in 1996.

It was George Harrison who had tipped me off months earlier that Derek was fighting cancer. Derek and George were very close. They collaborated on George's 1980 memoir, I, Me, Mine. When George started making movies, Derek also helped, working for George's movie company, Handmade Films.

In the beginning, I had been able to relate to Derek on several levels, not only as a fellow pot-smoker but also because we both had come up as newspaper reporters. Born in Liverpool in 1932, Derek grew up in West Kirby, Cheshire, and, at 17, became a reporter for the Hoylake and West Kirby Advertiser. After working for newspapers in Liverpool, he joined the staffs of the Sunday Express and the Daily Express in Manchester. He was contemporary music critic of the Express when he first heard the Beatles in May, 1963.

Hired in 1964 to ghostwrite Beatles manager Brian Epstein's memoir, A Cellarful of Noise, Derek had the magic to soon become Brian's personal assistant. When the stodgy Brian Sommerville quit the job of Beatles press officer, Derek took over. As I said, it was as if God, the Fates, chance and whatever it was had all conspired to cast Derek in that role.

The tighter Derek got with the Beatles, the more jealous the Beatles' moody and temperamental manager became. Finally, Derek's relationship with Epstein blew up at the end of the Beatles' American tour in the summer of 1964. Derek quit and moved to Hollywood, but his fight with Epstein had no effect on his relationship with John, Paul, George and Ringo. Derek kept in close touch with them, even though he was very busy running his own Hollywood publicity agency, representing the Byrds, the Beach Boys and Buffalo Springfield, among others.

Derek quickly won his way to prominence among Hollywood's hip set. With such L.A. cultural underground bigwigs as Lou Adler, John Phillips and Alan Pariser, Derek helped organize and promote the Monterey International Pop Festival, one of the milestone events in the underground's overall liberation effort of the '60s, which culminated with the half-million pot-smokers who dared to light up joints in public at the 1969 Woodstock Festival.

After working a short time with A&M Records, Derek high-tailed it back to Britain in 1968 to run the press office of the Beatles' new record company, Apple. Derek was restless, but, although he had made himself comfortable on this side of the Atlantic, he seemed always to return home. Home for Derek was with his wife, Joan, and their six children, Timothy, Gerard, Dominic, Abigail Victoria, Vanessa and Annabel. Home for Derek also was in the company of John, Paul, George and Ringo. Along with Neil Aspinall, the original Beatles road manager who now runs Apple Records, Derek had become a permanent part of the Beatles. As Allan Kozinn wrote in Derek's New York Times obituary, Derek, as Beatles Press Officer, had to

explain everything from John Lennon and Yoko Ono's early peace campaigns and solo recordings to increasingly persistent rumors---many of them occasioned by the Beatles' own unguarded comments in interviews---that personal and business problems were driving the band members apart. And because Apple was a flourishing record label at that time, he was also responsible for the promotion of a wide-ranging roster that included Mary Hopkins, Billy Preston, James Taylor, Doris Troy, Badfinger, Jackie Lomax, the Modern Jazz Quartet and the composer John Tavener.

Derek was the utility infielder who could fill any position. As one of the great actors of our time, Derek could play any role in this movie we call Life. As for me, I always considered Derek one of the larger-than-life figures I have known. He was another giant of my times. In his Times obit, Allan Kozinn also wrote:

When Mr. Taylor left Apple in 1970, he became director of special projects and later managing director of Warner Elektra Atlantic Records in London. In the mid-1970s, he returned to California as vice president of Warner Brothers. He produced several recordings, including Harry Nilsson's Little Touch of Schmilsson in the Night. He went back to Britain in 1978 . . .

Yes, Derek knew his way around and so he got around. He could play any role and so he played many. Did I already tell you that what I admired most about Derek was his ability to carry on individual conversations with a roomful of people like a checkers or chess champ playing a few dozen challengers at once and beating them all? In my montage of memories about Derek, he stands out as someone who was always fun to be with. As a great seducer, he had many stories about his extra-marital adventures. Of course, the last one to

hear them was his wife, Joan, who threatened divorce. But Derek truly loved his family, which was kept intact by reconciliation. Didn't Derek and Joan get together to write that book about getting sober and loving it?

Unhappily, I can't find any photographs of Derek and me. I'm sure there's one or two or three or four around somewhere. I've still got the oversized souvenir coffee cup he gave my late wife when we visited with Derek and Joan, who cooked us a dinner in their London apartment many moons ago. The coffee cup is emblazoned with a caricature of a "maw" calling out to "paw:" "PAW---Yer coffee's ready!" But "paw" is busily engaged on the seat in the outhouse. My wife, a coffee addict, said she somehow had never seen a coffee cup that large and Derek immediately gave it to her as a memento of our visit.

With such a growing family, Derek and Joan later moved to Sudbury in rural Suffolk, proudly taking over a converted millhouse known as Brundage Mill. It was there that Derek, showing me what a confirmed pothead he had become, took me outside to see the marijuana plants he had growing in his garden. With Neil Aspinall, at whose house I was staying, I had gone to Suffolk to visit Derek and see what his vaunted millhouse looked like. That was the night Derek told me how necessary AA was to him.

Of all the times I spent with Derek, that night emerges the starkest in my memory. Derek, standing there in the garden, earnestly explaining why AA had been his only alternative. Derek always spoke earnestly. And, in addition to being a fount of fun, he always kept a positive outlook, just as he did in his 1996 Christmas card to me, insisting he was making progress in his vain, hopeless battle with cancer.

Cancer of the esophagus. Derek had always been a heavy smoker. Of cigarettes first and then also of pot. He died in Brundage Mill, his Sudbury home, on Sunday, September 7, 1997. ## 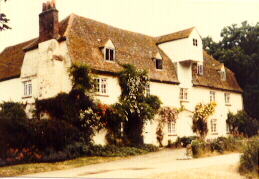 CLICK HERE TO GET TO INDEX OF COLUMN TWENTY-SIX