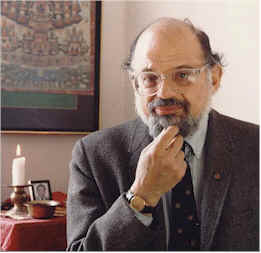 As we've already informed you, we are THE ALLEN GINSBERG MEMORIAL COMMITTEE, seeking to memorialize the death of a world-famous poet with an International convocation of poets, writers, painters, musicians, actors, photographers, filmmakers, educators and others prominent in the intellectual community, the arts and allied fields, all gathering in an observance in the Central Park Bandshell on June 3, 1998, the occasion of Allen Ginsberg's 72d birthday. We call this proposed event a "Convocation of Contemporaneity's Best Minds."

Having sent five letters to Commissioner Stern which still remain unanswered, we found it heartening finally to have been directed to you by a phone call to Christina Hokenberg of the Commissioner's office. However, we find it equally disheartening to learn that your first requirement is to learn how much money can be extorted from us as a "contribution to the Parks Department."

Not only do we express surprise at learning that the use of the public parks for so worthy an event would have to be paid for by a contribution to the Parks Department, which is already funded by the taxpayer money of the public at large, but we are further dumbfounded to learn that you granted a permit for an Allen Ginsberg Memorial in Central Park September 28 to a group of Lower East Side "hippie" types who are presumably as penniless as THE ALLEN GINSBERG MEMORIAL COMMITTEE. In other words, we wonder why we, representing the public, have to make a contribution to the Parks

An ad hoc
organization that
collected no dues

Department for use of a park for which the public has already paid and we also hope you can understand why we further wonder what was the amount of the contribution donated to the Parks Department by this Lower East Side "hippie" group?

Chaired by Amiri Baraka, one of America's greatest living poets, THE ALLEN GINSBERG MEMORIAL COMMITTEE is an ad hoc organization which does not collect dues and which has no treasury. We are an organization of creative people from all over the world who ardently wish for this event to occur. And, from all over the world, many of our members have already expressed their desire to participate and many more await only the confirmation of the date to fit this event into their calendars. We foresee an all-day program consisting of poetry readings, poetry performances, musical presentations and other varieties of artistic expression by some of the most creative minds of our times. There is no other city on this planet more appropriate in which to hold this event than New York, the capital of the world. The city should be proud to host this event rather than demand a contribution to the Parks Department as a first requirement.

Penniless as we are, we have foreseen the need for police, cleanup, insurance and other necessities and we have been searching for corporate sponsorship to fund this event. We had hoped to look to the Word Processing Industry to underwrite our expenses and, in the interim, one of our members has volunteered to contact Lee Jeans, which has funded similar events elsewhere. In the end, we feel that so worthy an event will ultimately have corporate sponsors knocking on our door and so we hope to fulfill all your financial requirements (even an extorted "donation" to the Parks Department) before June 3, 1998.

We enclose a copy of the most recent version of our "recruitment" letter, which fully states our purpose and intentions and which contains a list of members and potential members as of September 19. We would like to point out, however, that our membership keeps growing every day.

Meanwhile, membership in the Memorial Committee keeps snowballing. Following are links to worthy websites offered by members of the committee.

B. Birgitta Jonsdottir of Reykjavik, Iceland, who describes herself as a multiartist and webcreator, is also Webmaster for xnet internetcafe and the Director of Telepoetics. She is ranked among the top webdesigners of Iceland, has designed most of the nation's major cultural sites and produced Iceland's first live video and sound broadcast on the Internet. She is also known as "The Chameleon," a travelling poet, particularly renown for her blend of poetry, art and technology. Her goal, she says, is "to be a creative artist without selling my soul and to unite us earthlings in the cause of our mother." She calls her website "little worlds of creations": http://this.is/creations

C. Merilene M. Murphy, president of Telepoetics, Inc., and Telepoetics/Los Angeles, offers the Telepoetics network, which includes AVideoZine, CORPORATEDIGEST (new and fancy with a Free-CGI redirect so you can now use pull-down menus and click a button to find Telepoetics Network Directors, Resources, Venues and Affiliates!), CORPORATE DIGEST (What's New is a good place to check for updates all the time. You'll see our welcomes to new Network Directors, etc., and updates to corporate projects, such as the Business Plan and Training/Employment opportunities), GLOBALGALLERY (a fun posting of some of the Telepoetics Network Directors' art), FRIENDZONE (featuring Peter J. Harris, Wendy James, Birgitta Jonsdottir and the Watts Prophets), IN THE HAUS (links to creative spirits around the world), and LIVE&INTERACTIVE (a storehouse of tech resources and experiences). You can find all of these at http://www.geocities.com/Athens/Acropolis/1438/header9a.htm

E. Kurt Heintz is site director of "This is Telepoetics/Chicago" and its host venue, "Center Portion," which present and produce new media arts, performance poetry, and gatherings for Chicago's new literary arts community. Heintz is an acknowledged pioneer in poetry, video and electronic media applied to poetry in stage performance, hypermedia, and broadcast. His videos have won awards from the American Film Institute, the Chicago International Film Festival and the National Poetry Association's Poetry Film Workshop, as well as other local prizes. Heintz has performed in Germany, Iceland, Canada, and across the US, and was one of slam poetry's earliest followers from the movement's founding in 1986. You can find his site at http://www.tezcat.com/~malachit

F. Robert Bové says he's editor of Brooklyn Review #15 (scheduled to be published next Spring), the literary journal of Brooklyn College, "where I'm an MFA candidate in creative writing. A graduate of the University of Virginia, Charlottesville, I've had non-fiction, fiction and poetry published in numerous places. I've worked as a journalist in Washington, D.C., caretaker of a cattle farm in West Virginia, canvasser for Oregon Fair Share in Portland, and cab driver in Bergen County, N.J., my native turf. I now teach composition at Brooklyn College and New York City Technical College, CUNY, and edit the on-line publication Room Temperature, a section of the GRIST On-Line cooperative.

My long poetry cycle The UFOs of October, was recently published in the Jennifer Dorn-edited Sniper Logic #5, and my last two chapbooks are Nine from Metronome (Pisces Press) and Nectar (The Norton Coker Press). I live in Brooklyn with my wife Gae Riser. Robert's website is at http://www.thing.net/~grist/homebove.htm

G. A new home page has been dedicated to 81-year-old English poet David Gascoyne, who provided the introduction to Kenneth Patchen's book, Outlaw of the Lowest Planet and brought translations of the French surrealists to the English-speaking world in the '30s and '40s. This page can be found at http://www.connectotel.com/gascoyne

H. Danny Schechter, head of GLOBALVISION [ http://www.globalvision.org/globalvision], has a new book, The More You Watch, The Less You Know, available online at http://www.tiac.net/users/hlf/ds .

I. Charley Plymell's site has a poem written for Allen the day Allen died plus photos taken by his wife, Pam. The URL: http://www.buchenroth.com/cplymell.html

J. Larry Winfield is a Chicago Performance Poet who has been active on the poetry scene since 1990. He produces short films and leads a band called BRASS ORCHID. He is a curator and regular contributor to the National Poetry Video Festival, has organized the DNC Poetry Patriots' reading during last years' Democratic Convention. This year, he won second place in the most recent National Library of Poetry contest. His URL: http://www.geocities.com/Paris/LeftBank/2105/

K. Heather Haley says she is a poet, a freelance writer, an editor and a Web author. She was employed for many years as a staff editor and writer for the LAWeekly before returning to Vancouver in 1993. Haley also published Rattler, a critically acclaimed multimedia arts and literary journal. Her work has appeared in numerous North American literary publications, including The Antigonish Review, the Coe Review, Northern Lights, Literary Storefront, sub TERRAIN, Treeline, On The Bus, Catalyst, Heresies, High Performance, Verb and the Manic D Press anthology, The Verdict Is In. She is the founder of the Edgewise ElectroLit Centre which produces the live, interactive Telepoetics reading series. She says she would be honored to link her website with that of anyone associated with THE ALLEN GINSBERG MEMORIAL COMMITTEE. Her Edgewise Cafe & ElectroLit Centre website is at http://www.edgewisecafe.org  ##