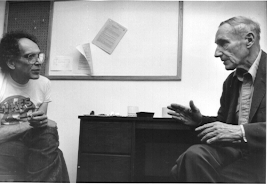 Back in 1959 when I wanted to interview Bill Burroughs for my New York Post Beat Generation series, he was I now forget where. Bill and I played only one scene together in this movie we call life. Otherwise, I never got a chance to do too much talking with Bill. He was always some place too inaccessible for me at the time---in "some corner of a foreign field," as he wrote in his Last Words shortly before his death, which, sadly enough, occurred on August 2, 1997.

"Some corner of a foreign field that is forever: Tangier; Mexico, D.F.; St. Louis, Mo.; Paris; London; New York City; 202 Sanford Ave., Palm Beach, FL; Lawrence, Ks---and a soupçon of Athens, Albania, Dabrovkirh, and Venice. So why bother? You are old, Father William. Why stand on your head?"

No, we never got to be buddies, Bill and I. I knew him mainly through Allen Ginsberg, who always looked up to Bill as an Authority. Allen was forever quoting Bill as The Final Arbiter, The Ultimate Source.

Bill and I met only once, back in 1980 at the 25th anniversary celebration of the publication of On the Road. A Beat Convention that Allen had cooked up at his beloved Naropa, home of the Jack Kerouac School for Disembodied Poetics (if I remember the name correctly). This was at the Colorado University campus in Boulder, in the heart of the Rockies, amid breathtaking mountainscapes.

My son Myles, who now works as a still photographer in the movie-making industry, took that picture of Bill and me playing our scene together. Myles' picture shows me listening in rapt fascination as Bill's gestures punctuate what he has to say. I'm smoking a joint and on the desk are lines of cocaine which I have been kind enough to provide. That was 17 years ago and Myles remembers Bill commenting that Myles' camera would steal the light in the same way that some African tribes feared having their pictures taken would rob them of their souls. Myles remembers replying that the camera gives light rather than steals it because its flash returns more light than whatever light is taken. To which, Myles remembers, Bill answered: "I'll have to think about that!"

As for me, I had my cassette recorder running, so I was stealing Bill's words or at least trapping them. Oh, he knew I was taping our conversation. Except that when I use my cassette recorder, I never bother remembering what is said because I let the cassette in my cassette recorder remember for me. Except, after 17 years, I can't remember what I did with the Bill Burroughs cassette. Hopefully, I'll come across it one day and then maybe get it transcribed for you. Anyway, if I can't remember exactly what Bill said, what I can remember is the economy of words with which he said it. In both straight talk and in hip talk, Bill had a vocabulary far in excess of mine. He'd been, after all, a junkie during practically his entire adult life. In fact, it was his book called Junkie, written under the

I had enough
mental troubles
without heroin

pseudonym of William Lee, which helped lead me to flirt with heroin myself. Junkie and peer pressure from the likes of such as Mick Jagger and several very beautiful women. But I never did more than just snort the stuff.

In fact, I'm happy to report that I've never ever made the mistake of sticking a needle into my arm. I had enough mental troubles without heroin. I had just plunged deep into cocaine when Myles snapped that picture of me interviewing Bill Burroughs. Deep into selling it, snorting it and smoking it. And I brought along a hefty stash to Boulder, too, thinking everybody else was into it as well. No wonder I can't remember what happened to my Bill Burroughs cassette. Yes, I've been nutty enough without letting myself get mooned out on heroin, too.

The last time I tried heroin was with a beautiful woman in the early 1980s. Not only did I not get laid, but I got sick from the stuff and never ever tried it again. Eventually, I learned to hate not only junk but junkies. I'm now trying to teach myself not to hate anyone any more, but what I've already learned is that it's unsafe ever to trust a junkie.

To say that Bill Burroughs was an exception is not to mean that he couldn't be as crafty and sly and underhanded and manipulative and unprincipled and selfish as a junkie. Bill was the kind of guy who tried to shoot a glass off his wife's head as an afterdinner joke in Mexico City once. That's weird behavior in any culture, unless he really wanted to get rid of her. The heir to the Burroughs fortune, he could afford to explore such weirdness. Obviously, it must have cost him a bundle to beat the rap, especially south of the border. As a visionary, Bill was a risk-taker, an adventurer, an explorer of the brain and I don't mean the brain through which he must have put the bullet in his wife's head. Like a junkie burglar, Bill tried to open every door he could, but he was one junkie I never grew to dislike. He was too much one of those great innovative wizards who has been able to cast a spell on not only my time but future generations. He was one of the great actors in this movie called life. And, as unlikely as I know I may look in this picture, I'm proud to have it. It's a memento of the scene I once played with Bill.  ##