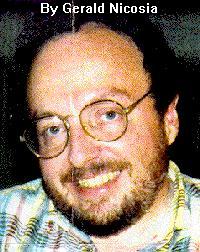 [I Think Gerry Nicosia has one of the sharpest literary minds in America. Winner of the Distinguished Young Writer Award from the National Society of Arts and Letters in 1978 for MEMORY BABE: A CRITICAL BIOGRAPHY OF JACK KEROUAC, then a work-in-progress, the book was originally published by Grove Press in 1983, then by Viking-Penguin and finally now by University of California Press. One of our outstanding Beat scholars, Gerry became interested in and involved with Vietnam's war veterans while helping paraplegic Vietnam veteran Ron Kovic with his memoirs, AFTER THE WAR, which has not yet been published. Paralyzed from his mid-chest down from a bullet wound in his spine and winner of the Purple Heart and the Bronze Star, Kovic is author of BORN ON THE FOURTH OF JULY,  which was made into a movie by Oliver Stone. As a consequence, Gerry is now completing his own compendium (more than 1,000 pages long), HOME TO WAR: A HISTORY OF THE VIETNAM VETERANS' MOVEMENT, which will be published by Henry Holt next year. The author of many critical essays concerning other subjects, Gerry in addition is a poet who writes the kinds of poems I like to read most, poems that tell stories about people. I am proud and happy to present the following poems, contributed by Gerry from his book of poetry, LUNATICS, LOVERS, POETS, VETS & BARGIRLS, published by Host Publications of Austin, a company of Texans who are to be congratulated for bringing this volume into print. ##]

I was the best-looking girl at the Club Morocco
till this dyed-blonde mulatto missy shows up
and something about the combination
of her blonde hair and brown skin
and toothy shark's smile
drove the johns as crazy as when I first did
my high-class Las Vegas ballet steps
in the altogether on their crummy stage
bending to show them an unforgettable
glimpse of the rosy lips of my cunt---
I got steady business for months after that,
I had so much fun getting those men all bothered
and when they'd ask where I came from
I'd always say
"Twin Peaks in San Francisco" and always get
a laugh or a blush---
I was no ordinary whore you understand
though I did give handjobs in the back, and more,
but I always wore a dress, and did my blonde hair---
real blonde, the johns knew that for sure---
just like Jessica Lange---
and one day here's that Missy
strutting around in just bikini panties and a bra
jumping into men's laps, no dignity at all,
and they forgot about me as they vied
with one another for the privilege
of feeling her up for $8 a minute---
for that's about as fast as she'd gulp down
her little soda-water drinks---
and she kept that back room going full-time too
so that sometimes I thought there must be two
or three of her, as devils do multiply,
and I would have gone back to Vegas,
the only place I really hated,
where people never stop trading their lives
for dreams of sex and power and position
both day and night, they're even hustling
when they sleep or water-ski---
but luckily the Japanese executives arrived
like white knights in the sunset---
or maybe I should say sunrise---
they wanted their sex tasteful and white
the way they got it straight from Hollywood---
they'd never touch Missy in a million years
and the best thing is they don't begrudge
you money like most johns do---
they know it's natural for men to spend on women
just like water flows down to the Japanese sea,
but you know I'd never marry one of them
for less than a brand-new shiny red X-J-S. ##

LESS IS MORE
(to Eddy Balchowsky)

Eighty-seven keys and five fingers
and the man makes music
out of the worst places men have known---
that terrible retreat in the Ebro Valley
where Spanish brothers murdered each other
for the sake of words and ideals
and blew his right arm off with an exploding machine gun
bullet
that kept him from becoming "just another piano player"
and the morphine afterward in the hospital
exploded in his mind new possibilities
and configurations of love and peace
that he took back to the alleys of Chicago
with a drawing pad propped against a fence
and the growing skill of pencil in left hand
("the left hand's a bitch," he told me once)
to make faces as spare and direct as Picasso
landscapes as magical as Chagall
and then not allowed to hang them in galleries
because of felony drug conviction
and so hung them on the same back-alley fences where
they'd been drawn
finally came back to the piano
(he never left the piano, in truth
like Fats Waller he was and always will be part piano)
by finding Bach's Chaconne arranged for the left hand
on the wet toilet floor of a Chicago tavern
took it home and rehearsed it for thirty years
till each time he plays it it's a greater miracle
then sells the tapes for five bucks each
perhaps for a meal at the Busy Bee
or to help with the rent on his heatless back room
where he also paints T-shirts and raises a beautiful, hip
daughter
and somewhere along the line acquired an old upright
piano
with one key missing
which forces him to compose and arrange
around the missing note
the way he's learned to play around is missing five right
fingers
and to speak and live around the gaps
from all the people he's lost
"like thousands of lights glimmering distantly in a fog," he
described them
all of whom he knows he'll reach and touch again
one way or another
because he's spent his life learning to be
a one-armed spider at the center of the web
that is too grand to even be given a name
("grand though not grandiose," he might correct me
some night when I've forgotten he learns as much from
me
as I from him)---
every time I think I know him he becomes someone else
he has to keep moving because motion is inside him
he has to keep playing because he is the music of loss
he has to keep drawing because none of our faces is
finished yet
his smiling Santa Claus bearded face is the promise of
America to me
but he's never been invited to the White House for dinner
and he's never once been given a grant
by the NEA. ##

I'll always remember the poems
that spilled out of your coffeepot
in that little flat on Harwood Alley
where dead poets lived on the walls
and reams of xerographic bond were destroyed forever
by the black ink tracks of your pained mechanical fingers,
your volcanic mind,
turned to something new
and far less innocent than tree pulp---
I mean the pulse of your deadly heart
that will pump forever through the bookstores and libraries
and writers' garrets of this world
making enemies and converts often at the same time.
Neeli Cherkovski exploder of trees and manipulator of
cellulose
trying to make San Francisco human
and the streets of America funny again!
Typing when no one hears him
tapping when no one cheers him
knocking on Whitman's door and Pound's and Kaufman's
(which is also his own door)---
and the real miracle of it is
everyone's always home when he comes to call---
C'mon, Neeli, do it all---
the ghosts are out there rooting for you
a million light years away in the universe
they see you coming toward them---
and applaud the life you give them
in that grand old book of your mind. ##

CLICK HERE TO GET TO INDEX FOR COLUMN FOURTEEN