A TON OF BRICKS OR A BARREL OF FUN? 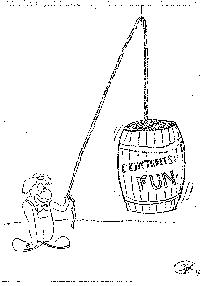 This is a bricklayer's accident report allegedly printed in the newsletter of the English equivalent of the Workmen's Compensation Board. It comes to us via John Sedgwick, Michelle M. Diliberto and Ernie Capeci, master carpenter on the staff of the Internet Cafe, the website of which is home to THE BLACKLISTED JOURNALIST column. Arthur Perley, Bigchief at the cafe, insists however, that it's an old English music hall routine.

I am writing in response to your request for additional information in Block #3 of the accident reporting form. I put "Poor Planning" as the cause of my accident. You asked for a fuller explanation and I trust the following details will be sufficient.

I am a bricklayer by trade. On the day of the accident, I was working alone on the roof of a new six-story building. When I completed my work, I found I had some bricks left over which, when weighed later, were found to weigh 240 lbs. Rather than carry the bricks down by hand, I decided to lower them in a barrel by using a pulley which was attached to the side of the building at the sixth floor.

Securing the rope at ground level, I went up to the roof, swung the barrel out and loaded the bricks onto it. Then I went down and untied the rope, holding it tightly to insure a slow descent of the 240 lbs of bricks. You will note on the accident report that my weight is 135 lbs.

Due to my surprise at being jerked off the ground so suddenly, I lost my presence of mind and forgot to let go of the rope. Needless to say, I proceeded at a rapid rate up the side of the building.

In the vicinity of the third floor, I met the barrel, which was now proceeding downward at an equally impressive speed. This explains the fractured skull, minor abrasions and the broken collarbone, as listed in Section 3 of the accident reporting form.

Slowed only slightly, I continued my rapid ascent, not stopping until the fingers of my right hand were two knuckles deep into the pulley, which I mentioned in Paragraph 2 of this correspondence. Fortunately by this time I had regained my presence of mind and was able to hold tightly to the rope, in spite of the excruciating pain I was now beginning to experience.

As you might imagine, I began a rapid descent down the side of the building. In the vicinity of the third floor, I met the barrel coming up. This accounts for the two fractured ankles, broken tooth and severe lacerations of my legs and lower body.

Here my luck began to change slightly. The encounter with the barrel seemed to slow me enough to lessen my injuries when I fell into the pile of bricks and fortunately only three vertebrae were cracked.

I am sorry to report, however, as I lay there on the pile of bricks, in pain, unable to move and watching the empty barrel six stories above me, I again lost my composure and presence of mind and let go of the rope. . .##

CLICK HERE TO GET TO INDEX OF COLUMN TEN