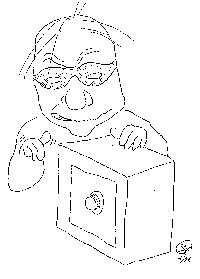 Morris Rudensky could remember the first gold piece he ever swiped from his father. Once, he said, he killed a man in Fort Sam Houston and then, he boasted, he led a jailbreak of 27 prisoners through a hole in the guard house wall. He claimed to've been Al Capone's cellmate in Atlanta's federal penitentiary and he also swore that he'd roomed behind bars for four years with Bob Stroud, the so-called "Bird Man of Alcatraz," a moniker which was also used as the title for a hit movie starring Burt Lancaster, who portrayed Bob Stroud in the flick.

Morris lamented that he never became famous enough for anybody to make a movie based on him. But he was joyful about the possibility that he might soon go on the Johnny Carson Show, that late night TV spectacle which was the ancestor of so many imitations. I forget whether or not Morris ever did succeed in getting his spot on Johnnie's show. Nor can I tell you what eventually became of Morris, or should I call him Red? Seventy-one that first and last time I met him some 25 years or so ago, Morris was bald as an Ostrich egg, but he still insisted on being called "Red." "Red" is what he was called by Al Reynolds, the Minnesota Mining and Manufacturing Company executive who gave the sales pitch at a press party Three M threw after deciding to try to cash in on New York's crime rate by hiring a safecracker as a lock salesman.

"Where else were they going to find a better safecracker than me?" Red asked with a laugh, adding, in his best Orchard Street Yiddish:

Farshstaste was the word for "understand" in the heart of what was then Manhattan's immigrant Jewish ghetto on the Lower East Side. Everybody on Orchard Street spoke Yiddish when Red was born there way back in 1899. Farshstaste"

Dressed in the gray, flannel suits which were then popular as corporate uniforms in St. Paul, Minnesota, a phalanx of Three M executives showed up with Red at this press party, held at New York's ritzy Four Seasons restaurant in the then-new, liquor-colored Seagram's Building. Beaming like reflectorized Scotch Tape, the Three M executives were hyping a new device designed to keep out crooks. Their hope that the device would replace the Fox Police Lock as New York City's method of securing itself against itself. After all, so much of the city's population seemed to be made up of burglars.

Aware that Red had already spent thirty-five years behind bars, I commented:

"They seem to've kept you in jail long enough!"

There was plenty of lox for Red to eat at the Four Seasons. As he smilingly obliged photographers by picking a competitor's lock, he nibbled on canapes offered by waiters who scurried about carrying trays loaded with caviar, chopped liver and, of course, Nova Scotia smoked salmon.

"See how easy it is to pick a lock made by some other company?" Red asked. "A furniture mover could pick it in no time flat."

He was the prison locksmith
at Leavenworth.
The warden trusted him

"The furniture movers'll walk out of your house carrying the TV, the typewriter, the stove and maybe even the refrigerator," he said. "But not a real professional like me. For six years, I was the prison locksmith at Leavenworth."

"What?" I asked in disbelief.

"I don't know," Red explained. "They just trusted me. I only had two clauses in my deal with the warden. I promised I wouldn't help anyone else go out and I wouldn't go out myself. Otherwise, I made keys to every storeroom and I stole them blind. Farshstaste""

Three M's new lock contained not only a hacksaw-proof dead bolt with a revolving cylinder but was also equipped with a battery-operated alarm that sounded like a police emergency siren if you banged on it, jimmied it, picked it or tried to open it with an unauthorized key.

"This represents the first commercial product of the New Business Ventures Division of Three M," Reynolds said. "We're really aiming for the whole growing area of security. The reason is we just think that's a good opportunity for new business---because of the growing need, because of the growing crime rate. When we began work on this lock three years ago, we needed a professional thief so we could try it out. We went to Lester McAuliff, the police chief in St. Paul, and he recommended Red."

Not only bald as an ostrich egg but also paunchy as a kangaroo, Red chuckled.

"This job is just some 'Mission Impossible' baloney," he whispered. "They just wanted to see if they could find an honest goniff to hire. Farshstaste""

In front of the TV cameras, Red sat down with a set of instruments to demonstrate the electronic alarm.

"You don't pick locks with one tool like the jerks do on It Takes A Thief," he said. "I don't monkey with a lock if I can't open it in ten or fifteen seconds tops. Farshstaste""

One of the TV reporters, taping his piece about Red, started telling how Red had stolen more than fifty thousand dollars before he was 15, how he had engineered two of the most famous robberies of the '20s and how he had financed a house of prostitution.

"---Whore house!" Red corrected him in a loud voice. Then Red winked at me and added:

The TV reporter immediately broke into a fit of laughter while the sound technician jumped up to stop the tape.

The eldest of seven brothers and one sister, Red was the son of a lumber expert who earned his living appraising stands of timber. Red's real name was Macy Motle Friedman.

"I was traveling with a little Polack kid and whenever the cops get you they give you a name. Rudensky is the name they indicted me on. I became famous under that name. Farshstaste""

The new lock was mounted on a display labeled, "FOR PEACE OF MIND LIVING." As the finale for the press party, the Three M executives picked a number out of a silver bowl and awarded the display model to Rita Reif, the reporter from the New York Times. As the party ended, Red was talking about all the times he sawed his way out of jail. He also said he taught himself how to Farshstaste seven languages while he was in prison.

Frankly, I don't think the Three M device ever succeeded in replacing the Fox Police Lock in New York. As I said good-bye, I slipped a Four Seasons ash tray into my pocket to take home as a souvenir. Farshstaste"##

CLICK HERE TO GET TO INDEX OF COLUMN TEN