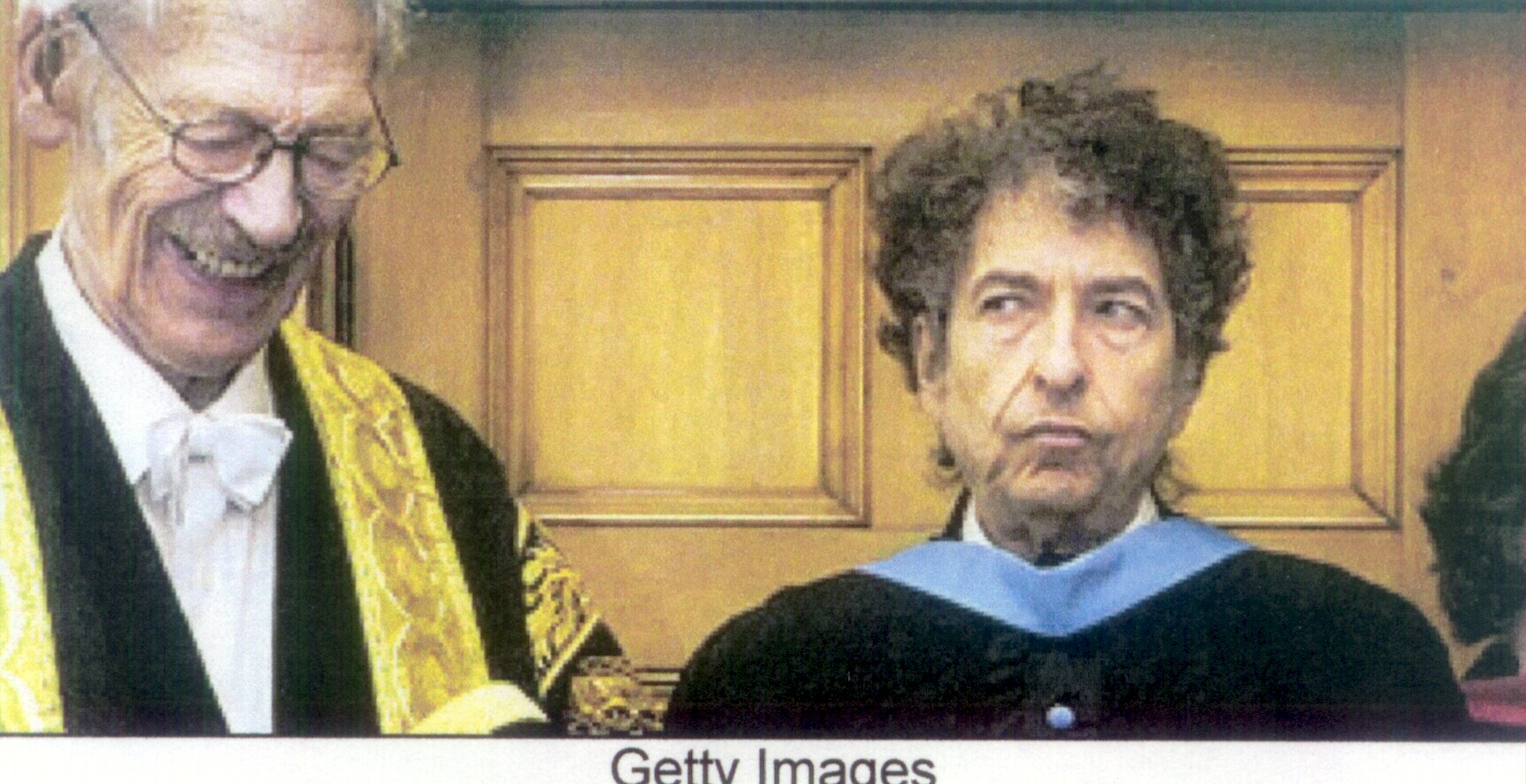 Bob Dylan after he received an honorary degree of Doctor of Music from Sir Kenneth
Dover, chancellor of the university.
(CUTE! LOL! LOOKS LIKE THE GRINCH!)

It's been a hard life eh?

LONDON (June 23) - Bob Dylan's lyrics have been taught in universities and debated at academic conferences. Not bad for a college dropout who railed, in "Tombstone Blues" against too much "useless and pointless knowledge."

Well, the times they are a-changin'. Dylan, dressed in a black academic gown, was awarded an honorary doctorate Wednesday by Scotland's oldest university. The University of St. Andrews said it was making Dylan, 63, an honorary Doctor of Music in recognition of his "outstanding contribution to musical and literary culture." "Many members of my generation can't separate a sense of our own identity from his music and lyrics," said professor of English Neil Corcoran in an awe-struck address. Dylan's fusion of folk, blues, country, rock and poetry, Corcoran said, "moved everything on to a place it never expected to go and left the deepest imprint on human consciousness."

"His magnificent songs will last as long as song itself does," he added. Dylan, who received his doctorate alongside Harvard philosopher Hilary Putnam and biologist Cheryll Tickle, arrived 50 minutes into the 90-minute ceremony and did not address the audience of 180 graduating students and their relatives. But
his silent - and sometimes yawning - presence onstage brought a strong dose of star power to the university's wood-paneled Younger Hall. Dylan sat motionless and showed no reaction as a university choir performed a version of his early classic, "Blowin' in the Wind."

Founded in 1413, St. Andrews, northeast of Edinburgh, is Britain's third-oldest university and one of its most prestigious. Its current students include Prince William, second in line to the throne. Announcing the honorary degree earlier this month, university chancellor Brian Lang called Dylan "an iconic figure for the 20th century, particularly for those of us whose formative years were in the 1960s and '70s.

"The university also cited Dylan's long-standing interest in Scottish culture. Corcoran said Scottish folk songs and border ballads influenced his early work, while a later song, "Highlands," is based on a poem by Robert Burns, Scotland's national poet. The musician has many fans among postwar and baby boomer academics.
Last month Christopher Ricks, author of the critical analysis "Dylan's Visions of Sin," was elected Oxford University's professor of poetry. Corcoran said Dylan was "a supremely interesting and significant figure in modern culture."

"I think he's akin to Pablo Picasso in many ways - his staying power, his resilience, the metamorphoses
of a very long career," he told BBC radio. Dylan, who is touring Britain, is due to play the first of two concerts in Glasgow on Wednesday night. Dylan has accepted only one previous honorary degree, from Princeton in 1970 - a commencement ceremony memorable in part because of a noisy invasion of cicadas. Dylan seems to have had mixed feelings about the event, which inspired the song "Day of the Locusts":

We slept through the fifties. The war had ended. We'd licked our wounds, we were carving out our own little niche, we believed in the government and corporations.

But really, trouble was lying underneath. There were the issues of racial equality, the Communist threat and gender equality. As the country exalted in space exploration the younger generation started to question the status quo, the institutions. They were seen as a fringe element. But soon, there was complete UPHEAVAL!

No one blinked an eye when fighting began in Vietnam. After all, we were the United States, we could clean up in a minute, we were all powerful, we could defeat ANYBODY!

Only this turned out to be untrue.

What happened in Iraq today is not an anomaly. It's not like it never happened before. In the nineties, the same thing happened in Somalia. Read "Black Hawk Down". DON'T buy the DVD. That's a sensationalistic military battle. The book upon which it's based makes clear that everybody there was wondering...WHAT THE FUCK ARE WE DOING HERE? What's the mission, can we win?

As the layers are peeled back, we can see that the Administration was Iraq crazy. SADDAM crazy. They were just looking for an EXCUSE to take him down.

There are no weapons of mass destruction.

We may want democracy, but it seems the citizens of that country want to forge their own destiny, WITHOUT US! Like in Vietnam. How can we be so ARROGANT? Was our naked belief in our government JUSTIFIED?

That's what we had, naked belief. There was a vocal minority saying DON'T GO! Iraq is not the issue. But a somnambulant, patriotic America said whatever the PRESIDENT wants is FINE WITH ME!

But, like Bob Dylan sang back in '64, sometimes the President of the United States must have to stand NAKED!

Clear Channel. The deejays railing against the Dixie Chicks, they're the same assholes who were driving around in '69 with American flag decals on their Chevies, who couldn't adjust to change, who couldn't
COGITATE! They're OUT OF TOUCH! With REALITY!

The landscape of the record business in the early sixties was COMPLETELY DIFFERENT from what evolved in the late sixties.

I say LET Sony and BMG merge! NOTHING could be better for MUSIC, never mind the MUSIC BUSINESS! These major corporations are run by fat cat bean counters, who aren't interested in music, but only MONEY!

In the late eighties, there WAS no indie record business. It was a blip on the radar screen. But then, with the merger of MCA and PolyGram, perfectly good acts were thrown on the scrapheap. But, they didn't
give up, they went  INDIE! Today, INDIES represent the greatest market share. And it's only going to
get BIGGER! As carpetbaggers like Thomas H. Lee drive all the soul and creativity out of the business. God, by time they get through, there's going to be NOBODY WORKING THERE!

The leaders speaking the truth back in '64 weren't only college students. No, they had music on their side. And those acts that WEREN'T on their side were immediately thrown over the railing.

Britney, Justin, all today's soulless acts, they're going to hit a wall INSTANTLY! Because you're no longer going to be able to straddle the fence. It's going to be a matter of WHICH SIDE YOU'RE ON! What statement are you MAKING!

And these people are solely making the statement that they're dancing fools. Like the vapid acts of '63.

Make no mistake, the best album released this year is "Bob Dylan Live 1964".

And it cuts to the bone.

All today's effects, samples...yet, one guy and his guitar recorded forty years ago has much more IMPACT!

The album starts off with "The Times They Are A-Changin'".

And they certainly are. The majors think their problem is file-trading. They're as out of it as the parents of '64. The problem is that they're not purveying what the audience wants IN THE WAY that they want. They're inured to the SYSTEM as opposed to the MUSIC!

But the piece-de-resistance is "It's Alright Ma (I'm Only Bleeding)".

"Old lady judges watch people in pairs Limited in sex, they dare To push fake morals, insult and stare While money doesn't talk, it swears Obscenity, who really cares Propaganda, all is phony"

Substitute John Ashcroft. Put in a couple of Supreme Court Justices. It's forty years later, and our government is railing about obscenity, gay marriage and the public...just doesn't care. Certainly not the YOUNG PEOPLE! THEY watch MTV. At Baylor, a RELIGIOUS institution, the college paper came out in favor of gay marriage.

The only thing lacking is a voice. Someone to articulate the public's FRUSTRATION! Someone to step up and tell the TRUTH. Who's not WORRIED about retribution.

Oh, we've got Howard Stern, but he's an adolescent. We need somebody as smart and mature as the fuckers who are messing with us.

He's coming. He will not be on a major label. Because they won't want him and he won't be comfortable there.

True artistry starts as a voice in the wilderness. That the mainstream REJECTS! Like Prince opening the Stones shows. But, truth knows no limits. Its spark starts an uncontrollable fire.

Artists of this caliber are on the horizon. Because we NEED THEM! And causation is in the environment.

These artists won't go platinum on their first release. They won't let anybody change their lyrics, they won't work with the Neptunes. They'll just do what feels right, and it will RESONATE!!

I think you're ready. Even if you've dismissed Bob Dylan all this time. Pick up this package. Its naked honesty will reach you. It will be a beacon. To what was, to what can be.  ##