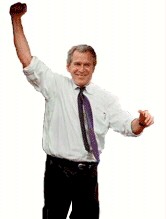 In meetings with top aides and administration officials, the President goes from quoting the Bible in one breath to obscene tantrums against the media, against Democrats and against others that he classifies as "enemies of the state."

Worried White House aides paint a portrait of a man on the edge, increasingly wary of those who disagree with him and paranoid of a public that no longer trusts his policies in Iraq or at home.

"It reminds me of the Nixon days," says a longtime GOP political consultant with contacts in the White House. "Everybody is an enemy; everybody is out to get him. That's the mood over there."

In interviews with a number of White House staffers who were willing to talk off the record, a picture of an administration under siege has emerged, led by a man who declares his decisions

Bush says
his decisions are
'God's will'

to be "God's will" and then tells aides to "fuck over" anyone they consider to be an opponent of the administration.

"We're at war, there's no doubt about it. What I don't know anymore is just who the enemy might be," says one troubled White House aide. "We seem to spend more time trying to destroy John Kerry than al Qaeda and our enemies list just keeps growing and growing."

Aides say the President gets "hung up on minor details," micromanaging to the extreme while ignoring the bigger picture. He will spend hours personally reviewing and approving every attack ad against his Democratic opponent and then kiss off a meeting on economic issues.

"This is what is killing us on Iraq," one aide says. "We lost focus. The President got hung up on the weapons of mass destruction and an unproven link to al Qaeda. We could have found other justifiable reasons for the war but the President insisted the focus stay on those two, tenuous items."

Aides who raise questions quickly find themselves shut out of access to the President or other top advisors. Among top officials, Bush's inner circle is shrinking. Secretary of State Colin Powell has fallen out of favor because of his growing doubts about the administration's war against Iraq.

The President's abrupt dismissal of CIA Director George Tenet Wednesday night is, aides say, an example of how he works.

"Tenet wanted to quit last year but the President got his back up and wouldn't hear of it," says an aide. "That would have been the opportune time to make a change, not in the middle of an election campaign but when the director challenged the President during the meeting Wednesday, the President cut him off by saying 'that's it George. I cannot abide disloyalty. I want your resignation and I want it now."

Tenet was allowed to resign "voluntarily" and Bush informed his shocked staff of the decision Thursday morning. One aide says the President actually described the decision as "God's will." God may also be the reason Attorney General John Ashcroft, the administration's lightning rod because of his questionable actions that critics argue threatens freedoms granted by the Constitution, remains part of the power elite. West Wing staffers call Bush and Ashcroft "the Blues Brothers" because "they're on a mission from God."

"The Attorney General is tight with the President because of religion," says one aide. "They both believe any action is justifiable in the name of God."

But the President who says he rules at the behest of God can also tongue-lash those he perceives as disloyal, calling them "fucking assholes" in front of other staff, berating one cabinet official in front of others and labeling anyone who disagrees with him "unpatriotic" or "anti-American."

"The mood here is that we're under siege, there's no doubt about it," says one troubled aide who admits he is looking for work elsewhere. "In this administration, you don't have to wear a turban or speak Farsi to be an enemy of the United States. All you have to do is disagree with the President."

The White House did not respond to requests for comment.  ##