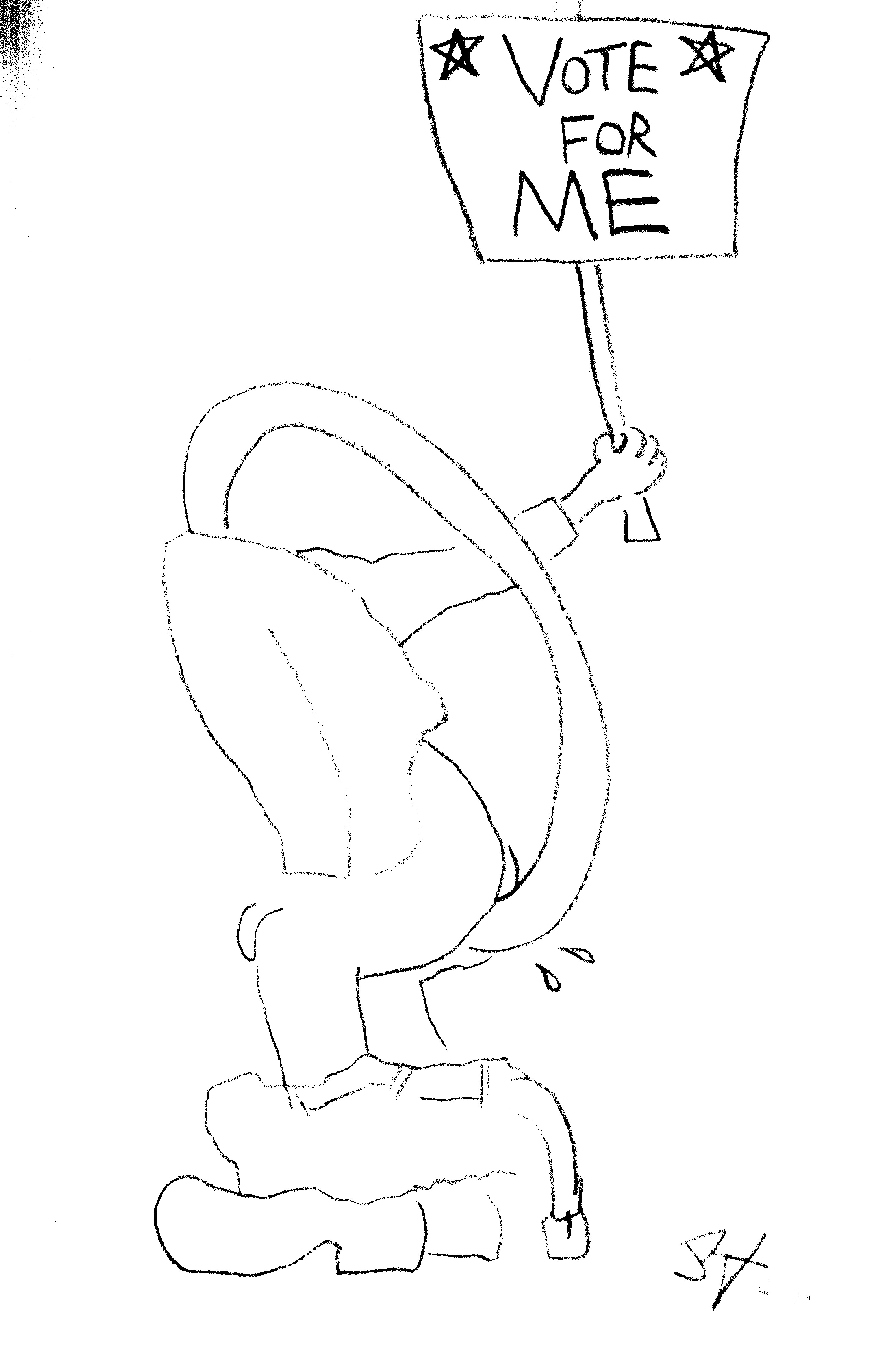 Ralphy Nader isn't in a presidential contest so much as he's competing with Our Boy Emperor in a contest to determine who is more despicable to enlightened Americans.

Our Boy Emperor tries to describe himself as the standard-bearer of the Party of Lincoln when actually he is the embodiment of Neo-Fascism. In other words, he is the equivalent of an American-style Hitler. We who love our country more than ourselves must unite against Our Boy Emperor. Obviously, Ralphy loves himself more than his country. He loves himself so much that he keeps his head up his ass because he doesn't want to see anything but his own shit.

Fundamentalists refuse to budge an inch---even in the face of a tidal wave. They know no such

To celebrate the publication of BOB DYLAN AND THE BEATLES, VOLUME ONE OF THE BEST OF THE BLACKLISTED JOURNALIST, author Al Aronowitz plans to throw a giant booksigning party at the Bowery Poetry Club, 308 Bowery (212-614-0505), in New York at 7 p.m. Thursday, May 27, featuring the Sizzling Bengali Baul, Babukishan Das, in a multi-cultural jam session with master musician David Amram, saxophone virtuoso Hayes Greenfield and others  yet to be named. Admission will be $10 at the door.

word as compromise. Ralphy says both the Democrats and the Neo-Fascist Republicans are for sale to the highest bidder. And that both have been bought by the filthy rich global corporations. That may be true but what is also true is that the Greater Evil is NOT a fallacy. And what is also true is that Ralphy already has been instrumental in putting our country into the hands of the Greater Evil.

Ralphy complains a lot about Our Boy Emperor, but he has forfeited his right to complain. In 2000, Ralphy campaigned while his sloganeers proclaimed: 'tHE LESSER EVIL FALLACY." In other words, although most people considered Al Gore the lesser evil, the Naderites insisted Gore was just as evil as Our Boy Emperor.

So, with the Republicans having been accused of secretly funding Ralphy's campaign, Gore lost the election to Our Boy Emperor, who quickly went about proving that he WAS the Greater Evil. And that the Greater Evil is NOT a fallacy. Haven't we all seen how evil the Greater Evil can be? Haven't we all seen our Boy Emperor deceive us into a needless war while at the same time dragging the country back to the oppressive conditions of the 1890s, when another Republican president, William  McKinley, was so much the tool of the robber baron warhawks that he was caricatured in one famous cartoon as an "imperialist despot?" Haven't we all seen Our Boy Emperor destroy almost all the environmental gains that earned Ralphy his prominence? And so Ralphy, who is well aware that a vote for Ralphy was---and still is---a vote for Our Boy emperor, has become complicit in forfeiting whatever reputation he had earned.

For four years, the fundamentalist far left has been trying to sell us the fairy tale that it was Jeb Bush's thievery that won his brother a 500 or so majority in Florida. But it's obvious that it wasn't Jeb Bush's thievery, as the Naderites want to delude themselves---and the rest of us---into believing. It was Ralphy's thievery. Ralphy stole some 90,000 votes from Gore in Florida. Ninety thousand stolen votes compared to Jeb Bush's thievery is the difference between 90 grand theft and petty larceny. And that theft of those 90,000 votes is what put our Neo-Fascist Boy Emperor into the White House.

In other words, it was Ralphy who put America into the hands of Our Boy Emperor and his gang of Neo-Fascist corporate crooks. And again, four years later, Ralphy is trying to do the same thing all over again. Ralphy and the fundamentalists who voted for him have bent so far left that the political spectrum is no longer as flat as the world was once thought to be..

They're both minorities. And they're both holier-than-thouers. They think they're so holy that they can anoint themselves to rule the rest of us. In other words, Ralphy, our great, self-proclaimed far-left elitist, has become---along with his far-left fundamentalist minority---as Neo-Fascist as the Neo-Fascists on the far right.

After all, the important thing for all of us opposed to the Neo-Fascists is to unify! To join in getting Our Boy Emperor and his gang of Neo-Fascist corporate crooks out of office, out of power and out of the way of democratic progress. But Ralphy is too busy looking at his own shit to see, to know or to care what's important.  ##