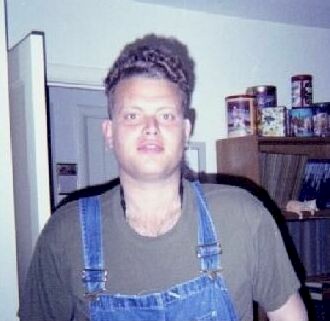 I had the sad task the other night of attending a memorial for the late Matthew (Angel) Remak, a talented writer whose fire-in-the-belly for the literary art actually led him to escape the monkey on his back. I'm proud to say Angel's name is listed among the authors who've contributed to THE BLACKLISTED JOURNALIST.

Yes, Angel got rid of the monkey and walked into the path of the worst killer-drug of them all---alcohol---that is to say the alcohol in the sodden brain of an speeding driver out for a night of roadkill in the family Lexus. I've learned to dislike junkies, but I consider junkies saints compared to drunken drivers.

Obviously, Angel died too soon. This memorial was held on Manhattan's Ludlow Street in The Collective Unconsciousness, one of those joints in which Angel used to read his poems to an audience of other poets. And in which those other poets acclaimed him an emerging future star. It was in this club and before a group of those very same poets that I stood up and read into the microphone THAT DAY---Angel's tone poem describing September 11, 2001, as seen through the eyes of a junkie longing to express himself.

I never met him," I told those poets at the Collective Unconscious that night. "We just talked on the phone a couple of times."

I told how it was a West Coast friend, Carl Macki, a sort of literary talent scout, who had turned me on to Angel. Carl sent me MY DAY WITH HEATHER and THAT DAY. The only junkies I can stand are junkies whose art ennobles us. I thought Angel was that kind of junkie. After all, y? gotta have at least a little bit of literary charisma before THE BLACKLISTED JOURNALIST will publish you!

But I advised Angel to kick his addiction. Junk is not only hell for whoever uses it, but it is also hell for all those around him. I was gratified to learn that he eventually emerged clean and happy.

Yes, Angel died much too soon. And a promising future is left an orphan!

Here's a story about Angel's death from The Marin Independent Journal:

A Novato resident who was a stockbroker and poet died early Sunday morning after he was struck by a car in San Francisco.

A car in the right-hand line swerved to avoid hitting Remak, who was then struck by a car in the middle lane, according to police. The driver, Matthew Wyman, 29, of San Francisco, was arrested at the scene on suspicion of driving under the influence, according to Officer Maria Oropeza of the San Francisco Police Department. Charges could be filed by the district attorney's office pending an investigation.

Joel Remak, the victim's father, said he was told his son was thrown more than 100 feet and that a doctor at the scene said he died instantly.

It was really tragic," said Joel Remak of New York. "He was presumably catching the last Golden Gate Transit bus back to Marin."

Witnesses told police Remak was dancing as he crossed the street and was only partially across the roadway when the light turned red.

Jesse Remak, 22, said his brother was a talented poet and writer, as wall as a licensed stockbroker but was not employed at the time of his death.

He was really focusing on his writing," Jesse Remak said, "He was one of the most brilliant people I ever met."

Matthew Remak, who was enrolled m the Novato Unified School District's Nova Independent Study program and later earned his general equivalency diploma before he began studying the stock trade, performed his works in clubs in the East Village in New York City.

He wrote about the noir side of his life in San Francisco and New York," Joel Remak said. "He was a renaissance man."

In addition to his father and his brother, Jesse, of Santa Barbara, Matthew
Remak is survived by his mother Kathy, of Novato; and by brother Michael of
Vallejo.

Kathy Remak said her son in January had returned to Novato, where he grew up, and was taking classes the College of Marin.

Matthew is very artistic, has a genius I.Q. he had some difficulties but his life had been wonderful," Kathy Remak said.

A memorial is set for 1 p.m. Thursday at the Chapel of the Hills at 330 Red Hill Ave. in San Anselmo.

A poetry reading will follow from 2 to 4 pm. at the Panama Hotel & Restaurant at 4 Bayview St. in San Rafael.

The restaurant was opened by Matthew's grandmother, Mimi Rabinowitz, in 1977.

Guests are invited to bring their own readings, as well as to hear Matthew Remak's poems read by his family.

Donations can be made in his memory to Mothers Against Drunk Driving.  ##

CLICK HERE TO GET TO INDEX OF COLUMN ONE HUNDRED